A former University of Colorado student could have faced life in prison after he was found guilty of raping a drunk girl on St. Patrick’s Day in 2014. Instead, Austin James Wilkerson, 22, of Boulder, will spend two years worth of nights in jail while he attends school during the day. Wilkerson was also sentenced to 20 years of probation on August 10.

The judge in the case, Patrick Butler, told the court, “I’ve struggled, to be quite frank, with the idea of, ‘Do I put him in prison?’ I don’t know that there is any great result for anybody. Mr. Wilkerson deserves to be punished, but I think we all need o find out whether he truly can or cannot be rehabilitated,” according to the Boulder Daily Camera.

Almost instantly, Wilkerson’s case drew comparisons to the case of Stanford University athlete Broke Turner. In June 2016, Turner was sentenced to six months in prison for raping an unconscious woman.

1. Prosecutors Say Wilkerson Told His Victim’s Friends He Would Take Care of Her After She Became Intoxicated

Prosecutors in the case say that Wilkerson had made advances towards the victim during a St. Patrick’s Day party. She rebuffed him which made him feel, “pissed off” and he would go on to call her a “f**king bitch.” He was accused of later telling her friends that he would take care of her when she was intoxicated. Prosecutors say that instead he, “isolated and raped the half-conscious victim.”

Wilkerson countered on the stand saying that the victim was not drunk and that their sex was consensual. While his defense team say the victim fabricated the rape claim in order to cover up her poor academic performance.

He was convicted in May of rape, a conviction that can carry life in prison in the state of Colorado. The prosecution ordered countered Wilkerson’s defense claims that he was remorseful. Prosecutors stated that the fact that he had changed his story showed he was not accepted his guilt.

The Daily Camera reports that District Attorney Stanley Garnett wrote in a memo to the judge before sentencing, “If more than a quarter of people in this community were killed by a drunk driver, or assaulted or menaced during an invasion of their home, the community would call for a stronger message than a sentence of probation with no punitive sanction to effectuate respect for the law, the deterrence of crime, and the protection of the public. Sexual assault should be no different. Murderers go to prison. Armed robbers go to prison. Rapists go to prison. This is what justice requires.

2. Letters that Were Presented in Wilkerson’s Favor Described the Trial as a ‘Traumatic Incident’ for Him

Prior to sentencing, Wilkerson’s friends and family submitted letters of support for the former University of Colorado student. One such letter mentioned that the trial had been a “traumatic incident” for him. While another said that Wilkerson “will go far in this world if not defined by this one incident.”

3. His Victim Says She’s Now Afraid of Going Out In Case She Encounters Wilkerson’s Friends

Wilkerson’s victim told the Guardian in a statement, “Surprisingly, this whole ordeal has been therapeutic. I get to tell my story and not keep it bottled up. Other brave survivors’ eerily familiar stories have inspired me to share my story that rape isn’t always a stranger in the bushes.” She also said, “Although I did have to re-live the trauma multiple times, I would go through this process all over again. Our goal has been to have the rapist not perpetrate again, which hopefully won’t happen even with the light sentence. We get to put a face to the 1-in-4 statistics.” You can read the full statement on the Guardian’s website.

The Executive Director of the Colorado Coalition Against Sexual Assault, Brie Franklin, told the Huffington Post, “We are disappointed to see, yet again, that the impact on the perpetrator, who chose to commit a crime against another person, is being considered over the impact of the victim, who did not have a choice in the matter.”

4. Wilkerson Was One of the Handlers of the University of Colorado’s Mascots

Deputy District Attorney Caryn Datz in speaking to the Daily Camera, compared Wilkerson to Brock Turner, and mentioned their participation in sports teams, saying, “The comparison is natural, I think, because of the very similar demographics. A young man attending an elite university and being a college athlete and perpetrating against a fellow student. The parallels are easily drawn.”

The Guardian reported days before Wilkerson’s sentencing, that the judge in Brock Turner’s case was back in the news. The newspaper says that Judge Aaron Persky handed out a four-day sentence to a man who was found guilty of possessing indecent images in 2015, including one of an infant being sexually assaulted. The suspect’s name in that case is Robert James Chain. 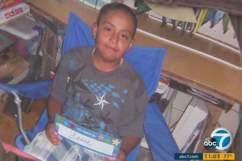 Read More
5 Fast Facts, Breaking News, Crime
wpDiscuz
19
0
Would love your thoughts, please comment.x
()
x
| Reply
A former University of Colorado student could have faced life in prison after he was found guilty of raping a drunk girl on St. Patrick's Day in 2014. Instead, he received a cushy work release sentence.