Hillary Clinton returns to the campaign trail Thursday with a rally in Greensboro, North Carolina. The democratic presidential nominee took three days off to recover from pneumonia after suffering a medical episode Sunday at a 9/11 memorial event.

Clinton has been recuperating at her home in Chappaqua, New York, according to her campaign.

“She has spent the day catching up on reading briefings, making calls, and she watched President Obama’s speech in Philadelphia on TV,” Clinton Campaign spokesman Nick Merrill told CNN.

Clinton will hold a rally in Greensboro on Thursday followed by a speech at a Congressional Hispanic Caucus gathering in Washington in the evening.

In Greensboro, Clinton will deliver a speech on the topic of “how we lift up our children and families,” according to Clinton spokeswoman Jennifer Palmieri.

She “will focus on what has been at the core of who Hillary Clinton is as a person and the mission of her campaign.”

The rally will be held at the University of North Carolina at Greensboro’s Old Student Recreational Center. Clinton’s stop in North Carolina is her fifth since she clinched the nomination on June.

Donald Trump made a jab at Clinton’s stamina during a rally in Canton, Ohio on Wednesday.

“I don’t know folks — do you think Hillary Clinton would be able to stand up here for an hour? I don’t know,” Trump said.

Clinton’s speech in Greensboro is set to begin at 3:45 p.m. Watch a live stream here. 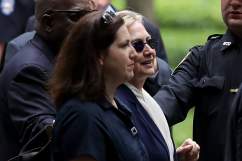