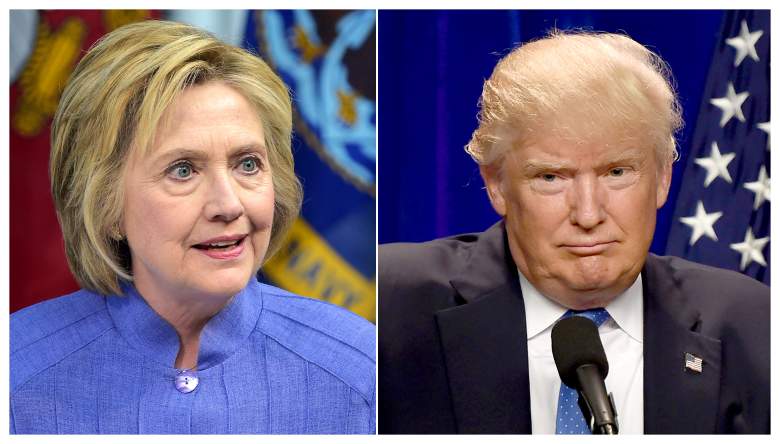 During the one-hour forum, moderated by Matt Lauer, Clinton and Trump addressed an audience of veterans and active military members.

Read on for a recap of the event, and vote in our poll at the bottom of the post.

Characteristics of a President

Here's what Clinton says America should want in a president #NBCNewsForum https://t.co/VhtGF1v60o

Lauer began the forum by asking Clinton, “What’s the most important characteristic of a president?”

Clinton used the opportunity to leverage her foreign policy experience. The former secretary of state brought up that she was present in the situation room during the raid and capture of Osama Bin Laden.

Clinton also said “temperament” is a necessary quality for the president to possess. She has frequently said Trump is temperamentally unfit to be commander-in-chief.

Navy vet asks Clinton how she expects those with access to classified info to trust her as president #NBCNewsForum https://t.co/4vxgBhRqgU

Lauer then followed up with a question about Clinton’s use of a private email server during her time in office as secretary of state.

“As I have said repeatedly, it was a mistake to have a personal account. I would certainly not do it again,” she said. “I make no excuses for it. It was something that should not have been done.”

Clinton went on to say none of the emails she sent or received had a “classified header.”

“The real question here is the handling of classified material, which I think is what the implication of your question was,” Clinton said. “[I] have a lot of experience dealing with classified material, starting when I was on the Senate Armed Services Committee, going into the four years as secretary of state.”

Lauer pressed further, and asked Clinton if some of the emails pertained to the U.S.’s “covert drone program.”

She replied yes, but said there were “no discussions of any of the covert actions in process being determined about whether or not to go forward.”

Lauer followed up, saying “But Director Comey also said this, after reviewing all the information, ‘There is evidence to support a conclusion that any reasonable person in Secretary Clinton’s position should have known that an unclassified system was no place for that conversation.’”

Clinton told him, “I respectfully point to the hundreds of experienced foreign policy experts, diplomats, defense officials who were communicating information on the unclassified system because it was necessary to answer questions.”

A Navy veteran in the audience asked Clinton how she expects those with access to classified info to trust her as president. The questioner said Clinton “clearly corrupted our national security.”

“I communicated about classified material on a wholly separate system…I did exactly what I should have done and I take it very seriously.”

The Democratic nominee responded: “I have been very clear about the necessity for doing whatever is required to move the V.A. into the 21st century, to provide the kind of treatment options that our veterans today desperately need and deserve.”

She then said, “I will not let the V.A. be privatized, and I do think there is an agenda out there, supported by my opponent to do just that.”

According to Politifact, that claim against Trump is mostly false. While he has proposed giving veterans access to private care, he hasn’t indicated he would overhaul the system.

ISIS was the last topic Clinton discussed during her time on stage. The former secretary of state said defeating ISIS is her “highest counterterrorism goal.”

A questioner asked Clinton how she will determine whether American troops should be sent into combat missions.

Trump says "the generals have been reduced to rubble" under the leadership of Obama and Clinton #NBCNewsForum https://t.co/aPozD1hdKN

Lauer asked Trump whether he knows more about ISIS than the generals, referencing a previous statement the Republican nominee made.

Trump said “the generals have been reduced to rubble” under the leadership of Obama and Clinton.

“We have had the worst, and you could even say the dumbest, foreign policy,” he said.

However, he added that he still has “great faith in the military.” He also said that there would probably “be different generals” to advise him on ISIS policy.

Donald Trump: ISIS would not have formed "if we would've taken the oil"#NBCNewsForum https://t.co/06DTRDCz6T

A veteran in the audience asked about the specifics of Trump’s plan to defeat the Islamic State.

“I think you know, cause you’ve been watching me I think for a long time, I’ve always said, ‘Shouldn’t be there! But if we’re gonna get out, take the oil,'” Trump responded. “If we would have taken the oil, you wouldn’t have ISIS. Because ISIS formed with the power and wealth of that oil.”

Trump suggested this move would have blocked Islamic State’s access to oil, which the group used in part to finance its operations.

“It used to be, to the victor belong the spoils,” Trump added.

In response to his strategy to defeat ISIS he said, “I have a substantial chance of winning, and if I win, I don’t want to broadcast to the enemy exactly what my plan is.”

When asked about her vote as a senator to authorize the war in Iraq, Clinton called the decision to go to war a “mistake.”

She said it is “imperative that we learn from the mistakes” so that it never happens again. Clinton then turned her attention to Trump, claiming he was for the war in Iraq.

When Trump took the stage, he denied that claim and said he was against the war in Iraq. He told the audience he stated his opposition to it in an Esquire magazine article published in 2004, after the war began. According to Politifact, Trump only began to publicly oppose the war once it began, which was in 2003.

Here's what Donald Trump says has best prepared him to be president #NBCNewsForum https://t.co/rorQJLjRB8

Lauer asked Trump about his qualifications to serve as president. Trump responded by saying the “main thing” is that he “has great judgement.” He also discussed his experience in international business.

“I’ve built a great company, I’ve been all over the world, I’ve dealt with many countries,” Trump said. “I’ve had great experience dealing with an international basis.”

Lauer asked Trump about his relationship with Russian President Vladimir Putin. Lauer brought up some of his previous comments about Putin including Trump stating, “in terms of leadership, he’s getting an A, our president is not doing so well.”

Lauer also mentioned that Trump said “it’s always a great honor to be so nicely complimented by a man so highly respected within his country and beyond.”

Trump responded, “well, he does have an 82 percent approval rating, according to the different pollsters, who, by the way, some of them are based right here.”

Lauer pressed, “But do you want to be complimented by that former KGB officer?”

In remarks last December, Putin used a Russian word for “brilliant” to describe Trump. Since then, Trump has repeatedly said Putin called him a “genius.”

“Well, I think when he calls me brilliant, I’ll take the compliment, okay?,” Trump told Lauer. The fact is, look, it’s not going to get him anywhere. I’m a negotiator. We’re going to take back our country.”

Sexual Assaults in the Military

Trump was asked what he would do to support all victims of sexual assault in the military by an audience member. He responded by saying it is a “massive problem” and the “numbers are staggering.” The Republican candidate added “we have to come down very, very hard on that.”

Lauer then followed up by asking Trump about a tweet from 2013.

In the tweet, Trump wrote, “Twenty-six thousand unreported sexual assaults in the military — only 238 convictions. What did these geniuses expect when they put men & women together?”

Lauer then asked if that means Trump would take women out of the military. He said, “No, not take them out, but something has to be happened.”

“When you have somebody that does something so evil, so bad as that, there has to be consequences for that person,” Trump continued. “You have to go after that person. Right now, nobody is doing anything.”

Vote in the poll below on who, if anyone, you think had the better performance: 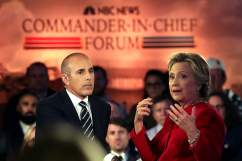 Matt Lauer Under Fire for ‘Softball’ Questions to Trump