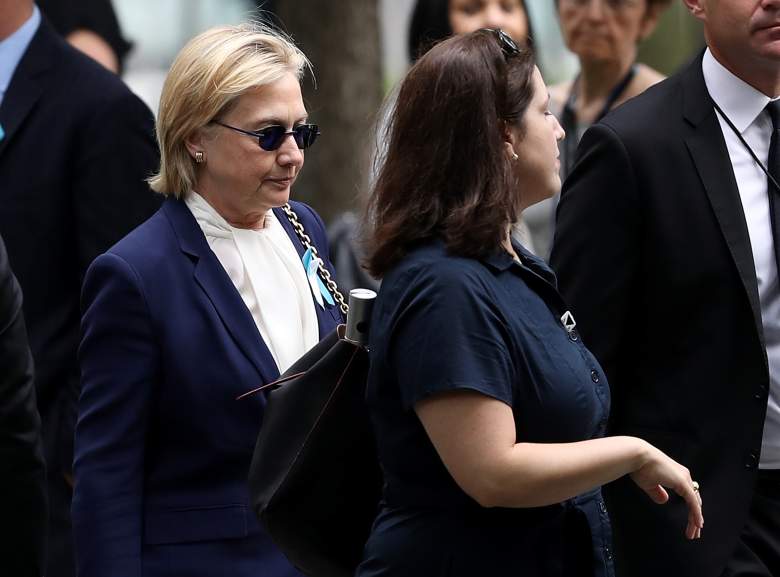 Who replaces Clinton if she has to drop out? (Getty)

Hillary Clinton had a health scare on Sunday morning when she appeared to collapse during a 911 ceremony, prompting questions about whether Bernie Sanders or Joe Biden would replace her if she had to stop her campaign due to health issues. Her doctor later announced that she had been diagnosed with pneumonia on Friday and, as a result, became overheated during the ceremony. Although Clinton later emerged from Chelsea Clinton’s apartment waving to reporters and appearing fine, her medical episode has sparked a lot of questions about who might replace her on the Democratic ticket if she had to drop out of the presidential race.

Hillary Clinton Passed Out from Pneumonia During a 911 Ceremony

Most telling part is flawless calm choreography of her staff and detail. They do this often. #HillarysHealth pic.twitter.com/UOCNH3YQHl

Hillary Clinton appeared to faint or pass out during a 911 ceremony before she could get into her van. You can see one video of what happened above and another angle below.

After she fainted, she went to Chelsea Clinton’s apartment nearby and later emerged, waving at reporters and showing that she was fine. Her campaign released a statement saying that she had become overheated, but they later clarified that she had been diagnosed with pneumonia a few days earlier on Friday.

After the incident, Clinton’s campaign announced that they were heading home to Chappaqua, but press were not allowed to travel with her. 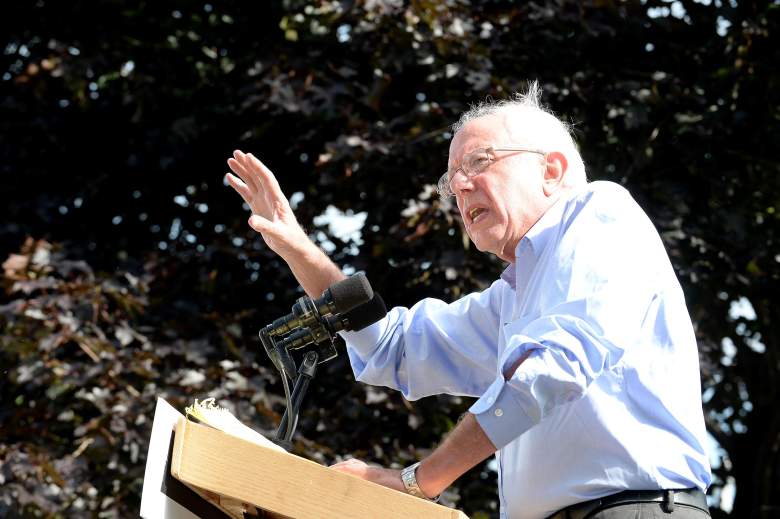 Clinton’s health scare has prompted many questions about who would replace Clinton if she had to drop out of the race because of her health. It’s important to clarify that her campaign has not made any statements about her even considering dropping out. However, this hasn’t stopped people from talking about it. David Shuster, a journalist who has anchored for Al Jazeera America and MSNBC, tweeted that the DNC would likely be looking into who might replace her if necessary:

So who would her replacement be? Even though Bernie Sanders did not assign his delegates to Clinton at the Democratic National Convention and he had the second-highest number of delegates in the Democratic party, the nomination would not automatically pass over to him if she dropped out. The nomination also wouldn’t automatically pass to the vice presidential running mate either.

According to the DNC’s bylaws and charter, the DNC would have the responsibility of picking a replacement. Exactly how this would be done is not spelled out, except that the members of the national committee would choose who fills the vacancy. The rules do not require that any kind of special consideration be given to Tim Kaine or Bernie Sanders. However, if someone besides Kaine were picked to replace Clinton, Kaine would remain in the VP spot.

If you want to study the rules more closely, Ballotpedia addresses them in an article about the Rules and Bylaws of the Democratic Party. (The article also discusses RNC rules too.) In Article 3 Section 1, the rules state that the Democratic National Committee has the authority of “filling vacancies in the nominations of the President and Vice President.” This continues in Article 3, which states that a special meeting of the Democratic National Committee can be held to fill a vacancy on the national ticket. The meeting has to be called by the chair, in accordance with procedural rules, and determined by the majority vote of those present and voting by proxy.

Some are saying that Bernie Sanders suspended these rules somehow during the roll call vote at the Democratic National Convention. During the delegate count at the Convention, Vermont passed on its vote until the very end. At that time, Sanders stood up and said: “I move that the convention suspend the procedural rules. I move that all votes, all votes cast by delegates be reflected in the official record, and I move that Hillary Clinton be selected as the nominee of the Democratic Party for president of the United States.” At that time, the “ayes” outweighed the “nays” and Clinton received the nomination.

Sanders’ delegates’ votes are now recorded. His votes are on the record. However, it is highly unlikely that Sanders’ statement about suspending the procedural rules also somehow suspended all procedural rules from now through the election. (But Heavy is checking with DNC sources to confirm this.) Instead, his suspending procedural rules more likely meant that the roll vote results would be entered into the record, the procedural rules requiring roll call voting suspended, and the nomination completed with a voice vote. By doing this, Sanders did not give his delegates to Clinton by acclamation, like Clinton did for Obama. He kept his delegates, and this would likely give him a stronger argument for being given the nomination if Clinton were to drop out.

The possibilities of who would replace Clinton would likely be either Tim Kaine, Joe Biden, or Bernie Sanders, although with how crazy this election cycle has been, someone else could certainly be considered.  Joe Biden was the top politician rumored to be a pick to replace Clinton back when there were concerns that she might be indicted, so he would likely still be a top choice. But there would also be a lot of damage done against Sanders’ supporters if Biden were picked over their favorite. Sanders supporters would be sure to launch a massive campaign to convince the DNC to pick him, and it wouldn’t be a tough sell considering how well he did in both the primaries and polling against Donald Trump. But considering how the DNC felt about Sanders, as revealed in emails leaked by Wikileaks, there would likely be many people in the DNC who wouldn’t want to pick him.

Interestingly, Carol Gould, an American broadcaster and author based in London, told Heavy that in the U.K., people wanted John Kerry as a replacement for Clinton. She wrote: “Many people on this side of the pond have been mooting John Kerry as a possible HRC replacement. He is recognised around the world as an impressive negotiator as Secretary of State and highly regarded in world capitals.”

Many names are being thrown around as a possible Clinton replacement. What we know for certain is that Sanders would have a strong case. But if Clinton had to drop out because of her health, there is no one person who would definitely replace her. It could be anyone’s position to win. The DNC would likely pick whoever they felt had the best chance of winning against Donald Trump. 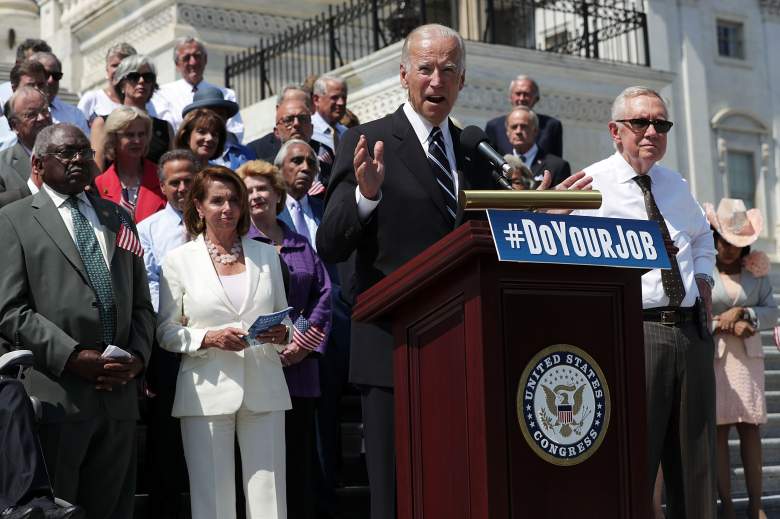 Joe Biden is another possible choice if Hillary Clinton had to step down. (Getty)

No Republican or Democratic presidential candidate has ever died or withdrawn before an election, nor has a President-elect before taking office. Back in 2000, when Slate examined the issue, they reported that if a candidate drops out so close to the election (such as the day of or the night before) that there isn’t time to endorse a replacement, it’s unclear what would happen.

However, it’s important to keep in mind that voters technically choose the states’ electors, who form the Electoral College and then elect the vice-president and president. Voters don’t actually vote directly for the President. And electors aren’t bound by Constitutional or federal law to vote according to the popular vote (although some states require it.) So if a vacancy happened after the general election but before the Electoral College casts their vote, the party can still select a replacement. However, as Slate reported, things can become a little unclear at this point because state laws might affect who electors can vote for.

If a nominee dies or has to step down after the Electoral College voted but before the President is sworn in, the Vice President elect becomes the President elect. But even that can get murky. Slate reported that if the change happens after Congress convened and counted the electoral votes but before the Inauguration, then the candidacy would go to the VP-elect. But if the change happened after the Electoral College cast their vote but before Congress convened, anything could happen. Congress could decide the votes were valid and give it to the VP, or they could throw out the votes and give the win to whoever now has the majority, or they could decide no one has the majority and let the House of Representatives choose.

Pneumonia Can Be Serious in the Elderly, But Clinton’s Doctor Said She Is ‘Recovering Nicely’ 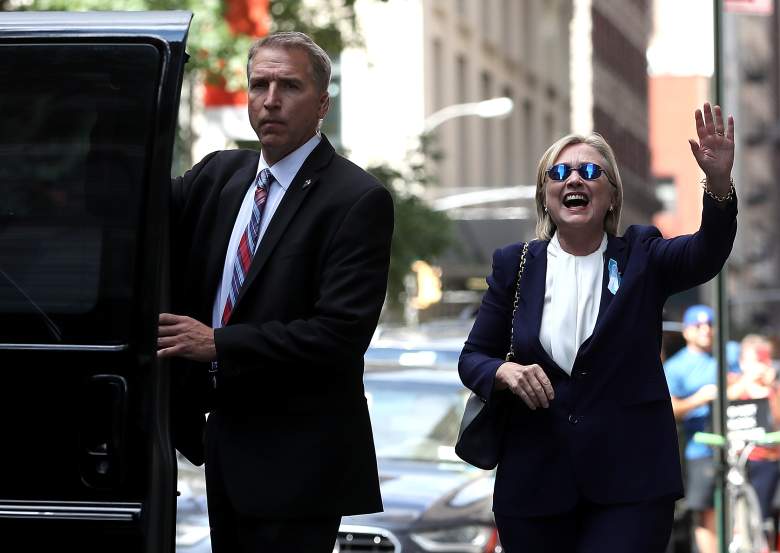 Hillary Clinton waves as she leaves the home of her daughter Chelsea Clinton on September 11, 2016 in New York City. (Getty)

Pneumonia can be far more serious when caught by elderly patients. According to Medscape, several studies confirm that pneumonia has a higher mortality rate in people who are 65 or older, accounting for 90 percent of pneumonia deaths. Clinton is 68 and will be turning 69 in late October.

One reason that pneumonia is so severe in older people is because it can have dangerous complications in people who are suffering other health problems simultaneously, Slate reported. In 2006, James Brown died of congestive heart failure due to pneumonia complications at the age of 73. Even Jim Henson of Muppets fame died of pneumonia in the 1990s when he was only in his 50s. The illness shouldn’t be taken likely.

However, Clinton’s doctor, Lisa R. Bardack, examined Clinton in Chappaqua after she fainted and reported that she was doing well.

She was put on antibiotics, and advised to rest and modify her schedule. While at this morning’s event, she became overheated and dehydrated. I have just examined her and she is now re-hydrated and recovering nicely.”

Clinton’s campaign said she became overheated, and that can certainly happen if someone is suffering from pneumonia and fever, even if the temperatures aren’t stifling hot. During the ceremony, the temperature outside was between 79 and 82 degrees, according to weather reports from that time.

Despite the doctor’s statement, some people are expressing doubts about her health and rumors are swirling about other conditions she could have. But pneumonia by itself can be serious in older people, so hopefully Clinton will take all the rest she needs to recover.

Loading more stories
wpDiscuz
95
0
Would love your thoughts, please comment.x
()
x
| Reply
Hillary Clinton's health scare has prompted questions about whether Bernie Sanders would replace her if she had to drop out. Find out what would happen here.