On Tuesday, a bitter and contentious election will come to a close.

Hillary Clinton and Tim Kaine will both be in New York Tuesday night as the election results come in. Clinton and Kaine will speak to their supporters at the Jacob K. Javits Convention Center in New York City during the “Hillary for America Election Night Event.”

Clinton is capping off a grueling campaign as the first female nominee of a major party.

“Tomorrow night this election will end, but I want you to understand, our work together will be just beginning,” Clinton said during a midnight rally in Raleigh, North Carolina. “We have to bridge the divides in this country. As the Bible says, we have to repair the breaches.”

The Democratic nominee took a dominant lead in October, but the race tightened in the final stretch. 10 days before the election, the FBI announced it was probing new emails related to Clinton’s use of a private email server while she was Secretary of State. The investigation has now been concluded with no charges against her.

Clinton’s lead has fallen to an average of 3.2 points, according the the latest RealClearPolitics average. The drop is significant considering that on Oct. 18, Clinton held an 8-point advantage over Trump. Following the initial announcement of the FBI’s search into new emails, Clinton’s numbers took a hit, but have since slightly rebounded.

Gates for Tuesday night’s event will open at 6:00 p.m. ET although it’s unclear when Clinton will address her supporters.

Those interested in attending the event should enter at 40th ST and 12th AVE. All attendees will go through airport-like security and should bring as few items as possible. No bags, sharp objects, selfie sticks, umbrellas, liquids or signs will be allowed in the venue, according to Clinton’s campaign. Small cameras are permitted. 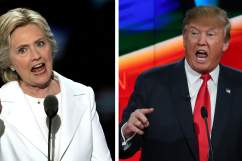