Video of Richard Spencer‘s chilling speech at the National Policy Institute’s annual conference on November 19 shows the group celebrating Donald Trump‘s victory with a “Hail Trump!” chant. As Spencer speaks, his followers give the Nazi salute, and do so repeatedly during the footage.

Spencer is known for his role in coining the phrase “alt-right” to describe his movement. Footage of his speech was posted online by The Atlantic. At the beginning of it, he tells the audience, “Hail Trump, hail our people, hail victory!” His audience gives him a standing ovation and uproarious applause.

In the speech, he calls the mainstream media “Lügenpresse,” which is a Nazi slur that means “lying press” in German.

“America was, until this last generation, a white country designed for ourselves and our posterity,” Spencer said in his speech. “It is our creation, it is our inheritance, and it belongs to us.”

Spencer’s speech was just one of several delivered during the National Policy Institute‘s conference at the Ronald Reagan Building in Washington, D.C. Tila Tequila, a former MTV reality star, was there.

Tequila even shared a photo of herself performing the Nazi salute. “Seig heil,” she wrote in the caption.

In total, the event included 11 hours of speeches, notes The New York Times. It happened as the media has scrutinized Trump’s relationship with the alt-right movement, especially after he chose Steve Bannon, who ran Breitbart News, to be his senior adviser.

“Our definition of the alt-right is younger people who are anti-globalists, very nationalist, terribly anti-establishment,” Bannon said.

Trump has issued a statement on the recent show of white nationalist support for his victory. The statement reads:

President-elect Trump has continued to denounce racism of any kind, and he was elected because he will be a leader for every American. To think otherwise is a complete misrepresentation of the movement that united Americans from all backgrounds.

During his meeting with New York Times journalists on November 22, Trump did say that he disavows the alt-right movement.

Asked point-blank about Nazi conference in DC over wknd: @realDonaldTrump tells @nytimes "of course" "I disavow and condemn them"

William Johnson, a white supremacist and the chairman of the American Freedom Party, sent Spencer an open letter, calling him to stop using symbolism associated with Nazi Germany. The letter was shared to members of the press. 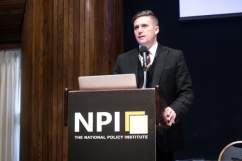 Loading more stories
wpDiscuz
24
0
Would love your thoughts, please comment.x
()
x
| Reply
Richard Spencer, a leader of the alt-right movement, led his followers in a "Hail Trump! Hail Victory!" chant as they responded with Nazi salutes.