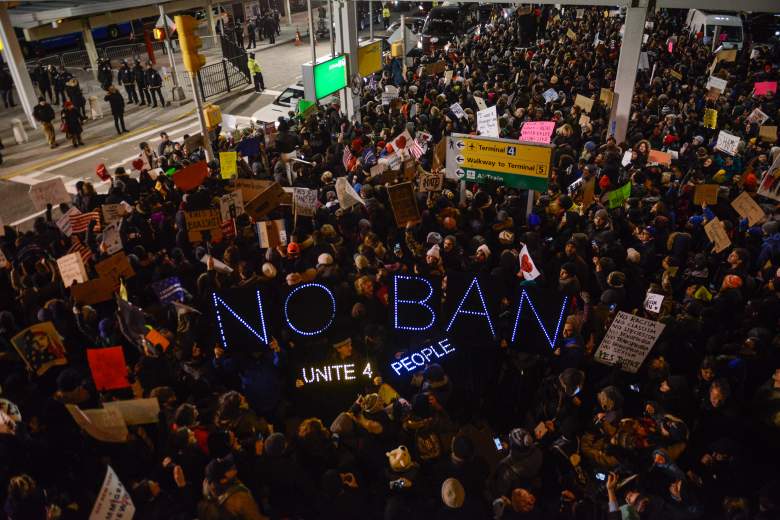 Protestors rally during a demonstration against the Muslim immigration ban at JFK airport January 28 in New York City. (Getty)

In response to President Donald Trump‘s executive orders signed January 27, which restrict refugee travel from seven Muslim-based countries, some are looking back at history and comparing the orders to previous U.S.-issued ‘bans’ on groups of people.

In the wake of the Iran hostage crisis, where more than 60 American embassy personnel were held captive in Tehran, President Jimmy Carter took action. The hostages were held by a group of militants for 444 days from 1979-1981, finally being released hours after President Ronald Reagan was sworn in.

In a post to FrontPage Mag, Daniel Greenfield stated that Carter’s actions are similar to what Trump is looking to do.

Greenfield wrote that following the crisis, “Carter issued a number of orders to put pressure on Iran. Among these, Iranians were banned from entering the United States unless they oppose the Shiite Islamist regime or had a medical emergency.”

The New York Times wrote that Carter’s attorney general, Benjamin Civiletti, ordered all Iranians with student visas to report to U.S. immigration officials within one month or face possible deportation.

The order was ruled unconstitutional initially by federal judge Joyce Hens Green, but was reversed less than a year later in September 1980. By then, almost 60,000 students were registered as requested, 430 were deported and 5,000 left voluntarily, PolitiFact reported.

In addition to the Iranian student situation, Carter ordered officials to “invalidate all visas issued to Iranian citizens for future entry into the United States.”

Carter said in a briefing about the matter, “We will not reissue visas, nor will we issue new visas, except for compelling and proven humanitarian reasons or where the national interest of our own country requires. This directive will be interpreted very strictly.”

But, as The Washington Post wrote, the orders didn’t affect large numbers of people at first because “most Iranian via-holders — students, tourists and businessmen — are already in the country and are thus protected from immediate deportation.”

The ban was temporary and ended after the hostage situation came to a conclusion.

As PolitiFact wrote, the difference between Trump and Carter’s bans on refugees is that Carter acted against nationals from Iran, whereas Trump’s orders target a specific religion.

Kermit Roosevelt, a law professor at the University of Pennsylvania told PolitiFact in an interview:

The difference is that Iranians were citizens of, and owed allegiance to, a country that was acting against the United States. The class of ‘all Muslims’ has no similar connection to ISIS or terrorists. That makes the analogy seriously flawed.

Immigration law experts came to the conclusion that Carter’s actions were taken in an effort to manage a crisis.