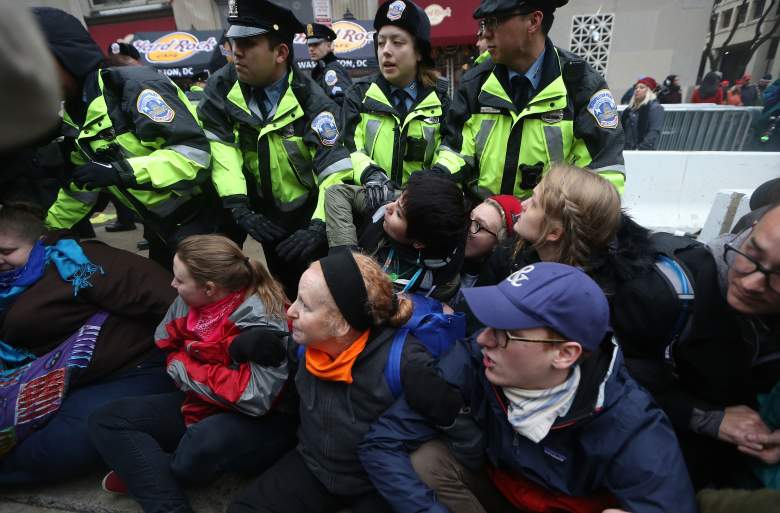 Protesters scuffle with police during an anti-Trump demonstration on January 20, 2017 in Washington, DC. (Getty)

Protests in Washington, D.C. turned violent on Friday as Donald Trump was sworn in as president of the United States.

Although demonstrations started peacefully on the morning of January 20th, they soon escalated as several hundred protesters broke store and car windows and clashed with police.

Most recently, at about 1:50 p.m., police began using pepper spray, firing rubber bullets and throwing flash bangs at a crowd of demonstrators just a few blocks away from the start of the inaugural parade. According to The New York Times’ Nick Corasaniti, this came as protesters threw rocks at police. Protesters are continuing to throw rocks and bricks at law enforcement, and a fire has now broken out after demonstrators set a limo aflame.

The fire is spreading to a second car as police move back protesters and fire fighters move in. pic.twitter.com/FVAD2pkbqw

This guy just got pepper sprayed directly in front of The Washington Post. pic.twitter.com/j3k2o0VluB

Protestors have now started a fire in the middle of K street at 13th pic.twitter.com/aHP3YElbKl

Cops are pushing protesters back up K st w/flashbombs. Protesters have been throwing bricks at the cops, upending mailboxes to stand on pic.twitter.com/WfcpXHVmBp

Anti-trump #Inauguration protesters and "antifascists" and the cops now at 12th and K st pic.twitter.com/bchSeGDWYF

This is the nation's Capitol right now pic.twitter.com/eP36jktAJm

Police firing non-lethal weapons on the corner of 12th and K. pic.twitter.com/UbgHpIJh6U

Police just opened up the pepper spray on the crowd at 12 and L pic.twitter.com/hCicF7LRBX

D.C. police now say they have made 90 arrests and that there has been “significant damage to a number of blocks in our city,” according to Washington Post reporter Peter Hermann.

The Washington Post reports that some of the demonstrators described themselves as “anti-fascist” and “anti-capitalist.”

After making their way to K street earlier today, protesters used hammers to break the windows of a black stretched limo; this is the limo that would later be set on fire. The windows of a a Starbucks and a Bank of America were also shattered.

Cannot overstate contrast between the calm ceremony at the Capitol and the feeling in the streets. pic.twitter.com/057o4H87KL

Aftermath of protests on 13th and I pic.twitter.com/CcO24AFwbN

Workers clean up smashed glass at Starbucks & Bank of America on I st. Anarchy symbols spray painted on businesses pic.twitter.com/RY7W90LJ0P

According to NBC News’ Alexandra Jaffe, an elderly man was knocked over during one of these violent clashes and was taken away in an ambulance bleeding from the back of the head.

An elderly man was knocked over during violent protest on 13th and I. Loaded into ambulance, bleeding from the back of his head pic.twitter.com/M2DiFHz4Xq

The New York Times reports that one woman yelled during the protest, “Police officers are Trump supporters.”

Damage to businesses up & down I st. pic.twitter.com/KLucvivMDX

Activists shout 'Shame' as they protest ahead of Donald Trump's #Inauguration https://t.co/ULZcHQUURT pic.twitter.com/zyvRM3f3ih

There were, however, many peaceful protests in D.C. on Friday; D.C. Interim Police Chief Peter Newsham told CNN this afternoon that there are thousands of people protesting peacefully and just a few hundred involved in the clashes with police.

Some pro-Trump demonstrators also took to the streets to counter the anti-Trump protests, including Bikers for Trump, a group of thousands of motorcyclists who have supported the 45th president since the early days of his campaign.

“Get a job,” Doug Rahm of Bikers for Trump yelled, according to the Associated Press. “Stop crying snowflakes, Trump won.”

You can follow along with the protests live in the embedded stream below.

Loading more stories
wpDiscuz
14
0
Would love your thoughts, please comment.x
()
x
| Reply
Protests in Washington, D.C. have turned violent ahead of the inauguration of Donald Trump. Here are some of the most dramatic videos captured so far.