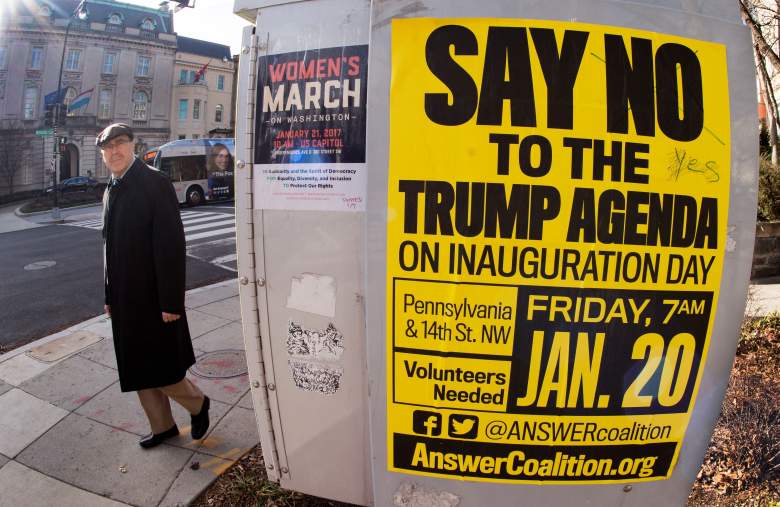 Street posters calling for protests are seen in the Dupont Circle area of Washington, DC. (Getty)

Not everyone is happy about President-Elect Donald Trump’s inauguration. In fact, thousands of people are expected to be protesting Washington, D.C. during the event, before and after. Additional protests are planned in other areas around the country. Here’s a list of some of the bigger protests that are happening, along with all the protests in the D.C. area. If you know of any protests that we missed, please let us know in the comments below.

List of Inauguration Protests in Washington, D.C. on January 20

This protest is open all day on Friday, but a rally will begin at 2 p.m. The “festival of resistance” is a family friendly march and rally that has obtained a permit for McPherson Square, according to their website. The group will also have an “unpermitted Anticapitalistic Bloc” march, along with protests at 12 Secret Service security checkpoints. Participants are encouraged to chat about the event on social media using the hashtag #DisruptJ20. They also plan to protest the “Deploraball” on January 19.

This group will be meeting at Union Station at 6 a.m. on January 20. They will march on the White House at 10 a.m., according to their Facebook page. The march will end at McPhearson Square, a block from the White House.

The Equality Coalition and Occupy Inauguration joined forces to bring a “March on the Inauguration” in D.C. on January 20. It begins at 9:30 a.m. Eastern at Malcolm X Park with a rally, and the march begins at 12:00 p.m. At 2 p.m. they will rally at McPherson Square. The group will have a 7 Year Anniversary event then the next day at Hamilton Crown Plaza Hotel. Speakers will include Jill Stein and Chase Iron Eyes.

This protest begins January 20 at 7 a.m. Eastern at the Navy Memorial on 701 Pennsylvania Ave. NW. The demonstration is focused on speaking out against war, militarism, racism, anti-immigrant scapegoating, and assaults on workers’ living standards and the environment, according to their website. You can RSVP on their webpage. The protest is taking place on the Inaugural Parade route. It starts at 7 and “will continue until after Trump passed at the conclusion of the parade.” Estimated size is 10,000.

Showing Up for Racial Justice: January 20

This event begins at 4 a.m. Eastern and is designed to be an artful, non-violent rejection of Trump’s vision for the country, according to their Facebook page. There will also be additional events, and the group encourages people who are coming to attend a training and action orientation at All Souls Church. The group will also have a contingent taking part in the Women’s March on January 21.

This event begins January 20 at 10 a.m. Eastern on Logan Circle, DC. (Read more on their website here.) They’re asking everyone who comes to wear all black.

It’s unclear exactly what this group is doing on January 20, but they have a Facebook page here. They’re planning on having contingent groups involved in organized protests, including #DisruptJ20 and the Women’s March. You can express interest on the form here.

Not My President: January 20

This one’s more disorganized and appears to not be organized, but is more a group of people interested in showing up to protest. The Facebook page for the event is here, and 20,000 have said they are going and 68,000 have expressed interest. However, the last note on the event, written December 29, reads in part: “Look let us be frank, we don’t have permits. We don’t have safety officers or signs and we only have a vague idea of a route, we are college students who did not expect it to get this big and we don’t know what we’re doing. We are thrilled that so many people want to show up, but we the admins have to face the fact that we alone can’t manage this. So we are relinquishing our control. But that doesn’t mean we’re giving. And neither should you. We are still going to be at the inauguration on the morning of the 20th.”

This group is meeting at McPherson Square Park at 6:30 a.m. on January 20. On Facebook they describe themselves as a “queer anti-inauguration party at a security checkpoint!” They emphasized that they are there to have a good time and dance. They do not want to instigate or provoke arrests.

The Movement for Black Lives: January 20

This protest begins on Friday, January 20 at 7 a.m., according to their Facebook page. They’ll be meeting at MPD Police Headquarters on 300 Indiana Ave. NW. This is a combined movement of Black Lives Matter DC, Baltimore BLOC, and the Movement for Black Lives.

This group is meeting at 7 a.m. on Friday, January 20, according to their Facebook Event page. However, they are not making their meeting location public, but are asking to message their Facebook page for location details.

This group is meeting around 7 a.m., January 20, near the checkpoint at 10th St. & E. St. NW. (Across the street from the Right to Life Headquarters.)

This group is handing out 4,200 joints of legally grown cannabis. At 4 minutes 20 seconds into Trump’s speech, they plan to light up. They’re meeting at Dupont Circle around 8 a.m. and then marching to National Mall.

This is a permitted march, according to their Facebook page. They’re organizing marching bands, drummers, puppets, and tents to display art and culture. They will meet at Columbus Circle at 12 p.m. and arrive at McPherson Square at 2 p.m.

List of Inauguration Protests in Washington, D.C. on January 21

The Women’s March on Washington may be one of the biggest protest events of the inauguration. Currently, 200,000 women may be showing up. The march starts at 10 a.m. Eastern on Independence Ave. and Third St. SW on Saturday, January 21 (the day after the inauguration.) Men can also participate in this march. The Metro is opening up two hours early (5 a.m.) on Saturday and adding up to 24 additional trains to accommodate the March.

A Millennials March will take place on Saturday, January 21. The group is seeking a million millennials to join the march in D.C. You can sign up on their website.

Inauguration Protests Outside of D.C.

Below is a partial list of some of the inauguration protests that are happening in states outside of the D.C. area. There are far more protests than we can list here. For example, the Women’s March on Washington has affiliated protests in many cities and states across the country. This list will give you an idea of what’s going on outside of DC. If you know of an event that should be listed, please include it in the comments below.

More than 600 sister marches to the Women’s March on Washington are taking place on January 21. Here’s a map of where they are all taking place:

You can view the map here.

Quite a few protests are happening in the Chicago area. On January 20, these include a UIC Walkout & Rally at 10:40 a.m., a People’s Assembly at Grace Episcopal Church at 1 p.m., a Resist Trump protest at Daley Plaza, an Art Against Hate night at 9 p.m. at Quenchers Saloon, an Anti-Trump watch party at In These Times at 5 p.m., and a peaceful protest at Trump Tower at 5 p.m.

On Saturday, January 21, events will include a Women’s March on Chicago starting at East Jackson Drive and South Columbus Drive at 10 a.m., and a Defend Planned Parenthood Fundraiser at Red Line Tap at 8 p.m., and a DOJ Investigation Teach-In at Northwestern Law at 11 a.m. (Note: This originally had a typo and said “Defund.” The event is definitely to Defend Planned Parenthood.)

Quite a few events are also happening in Pittsburgh, as you can see in this Reddit thread. These include an Occupy the Inauguration event at Point State Park at 4 p.m. and an Inauguration Day Alternative at the August Wilson Center at noon. A Women’s March on Pittsburgh is happening at 11 a.m. on January 21. You can see more events here.

Lots of things are happening in Seattle, according to this Reddit thread. On January 21, there’s an Inauguration Day General Strike, a Beer Trumps Hate at Red Door event at 11:30 a.m., a Bed-in for Peace at 8 a.m. at KEXP Studios, a Student Walkout at Noon at Seattle high schools and universities with a march to Westlake Park downtown, an All United/None Divided March and Rally at 1 p.m. at Judkins Park, an Inauguration Night Reflection event at The Evergrey at 6 p.m., a Race for our Rights at 6 p.m., and much more. 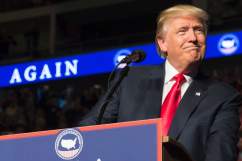 What Time Will Trump Be Sworn In as President on Friday?

Loading more stories
wpDiscuz
61
0
Would love your thoughts, please comment.x
()
x
| Reply
Here is a complete list of all the inauguration protests and marches happening in D.C. Also learn about sister events happening in other states.