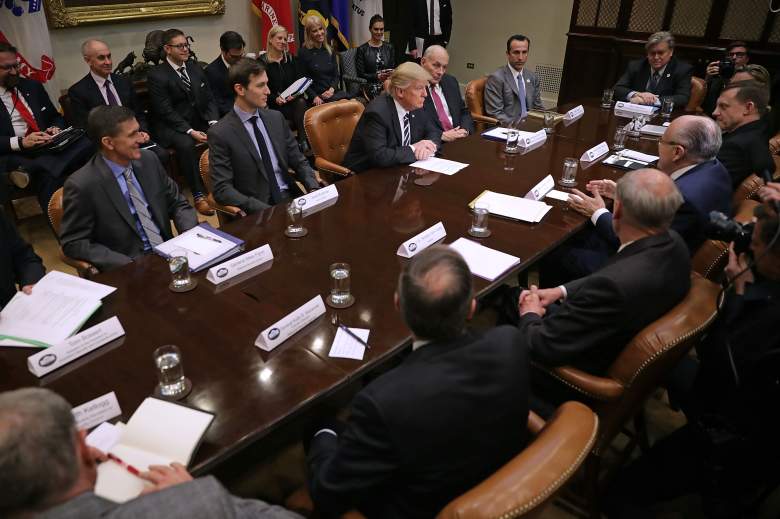 President Donald Trump delivers remarks at the beginning of a meeting with his staff and government cyber security experts in the Roosevelt Room at the White House January 31, 2017. (Getty)

The National Security Council is earning more attention this week following a New York Times report of turmoil among its staff members.

“Three weeks into the Trump administration, council staff members get up in the morning, read President Trump’s Twitter posts and struggle to make policy to fit them,” The Times reported. “Most are kept in the dark about what Mr. Trump tells foreign leaders in his phone calls. Some staff members have turned to encrypted communications to talk with their colleagues, after hearing that Mr. Trump’s top advisers are considering an ‘insider threat’ program that could result in monitoring cellphones and emails for leaks.”

The top advisor on the council, Michael Flynn, is also under fire after The Washington Post reported that Flynn spoke with Russian Ambassador Sergey Kislyak about economic sanctions, despite Flynn repeatedly claiming he has ever done so.

So outside of Michael Flynn, who makes up the National Security Council, exactly?

Assistant to the President for National Security Affairs: Michael Flynn

Michael Flynn has the top job at the National Security Council: assistant to the president for national security affairs.

Flynn is a retired Army lieutenant general and former director of the Defense Intelligence Agency. He left that job about a year earlier than originally planned, and The Washington Post reported at the time that he was forced out due to his chaotic management style.

Throughout the 2016 presidential election, Michael Flynn was a supporter of Donald Trump, sporadically appearing at his rallies and speaking at the Republican National Convention. He has been criticized for his comments about Muslims, as he has described Islam as “a cancer,” and in 2016 he said on Twitter that fear of Muslims is rational. He has since deleted his Twitter account.

McFarland also worked in the Reagan White House, serving as speechwriter for Secretary of Defense Caspar Weinberger and then as principal deputy assistant secretary of defense for public affairs.

In recent years, McFarland has worked as a commentator on Fox News.

Assistant to the President, Executive Secretary of the National Security Council and Chief of Staff: Keith Kellogg

“I am honored to not only be a part of this historic administration but also to be serving with General Flynn and KT McFarland, who are widely respected as some of the most experienced and strategic national security minds,” Kellogg said in a statement when he was hired. “Together, with the incredibly talented Dr. Crowley, the NSC will help lead President-elect Trump’s national security agenda.”

Michael Anton serves as deputy assistant to the president and deputy national security adviser. He had a similar role during the administration of George W. Bush, according to The Weekly Standard.

Throughout the 2016 election, Anton wrote a number of pro-Trump articles under the pseudonym Publius Decius Mus. He was equally critical of those on the left and of traditional, Never-Trump conservatives. With his articles, he portrayed the election as nothing less than a battle to save America, and in one piece, he referred to it as the “Flight 93 election,” referencing the plane that was hijacked on September 11th, 2001 but that crashed after passengers fought back against the hijackers.

“2016 is the Flight 93 election: charge the cockpit or you die,” he wrote in a piece originally published with Claremont Review of Books. “You may die anyway. You—or the leader of your party—may make it into the cockpit and not know how to fly or land the plane. There are no guarantees.Except one: if you don’t try, death is certain. To compound the metaphor: a Hillary Clinton presidency is Russian Roulette with a semi-auto. With Trump, at least you can spin the cylinder and take your chances.”

According to The Weekly Standard, Anton once served as press secretary and speechwriter for New York City Mayor Rudy Giuliani before working as communications aide for the National Security Council in the George W. Bush administration. Anton was one of the national security advisors to argue in favor of invading Iraq. He would later write that the Iraq war was “a strategic and tactical blunder that destroyed a country (however badly governed), destabilized a region, and harmed American interests.”

This is not the business executive who has appeared on Shark Tank and who founded As Seen On TV. Rather, this Kevin Harrington is the former managing director and head of research for Thiel Macro LLC, which manages the personal capital of Peter Thiel. Thiel, of course, was a supporter of Donald Trump during the 2016 election.

According to a White House press release, Harrington is also coauthor of the PayPal business plan, and he once served on the Center for International Security and Cooperation, a foreign policy think tank at Stanford.

Kenneth Juster is in charge of coordinating the president’s international economic policy, and he will also represent the president at the G-7, G-20, and APEC Summits.

Juster previously served as U.S. Under Secretary of Commerce from 2001 to 2005, and before that, he was acting counselor of the Department of State and senior advisor to Deputy Secretary of State Lawrence S. Eagleburger.

In recent years, Juster has worked as the managing director of the global investment firm Warburg Pincus.

As deputy national security advisor for regional affairs, David Cattler is in charge of coordinating the staff’s regional senior directors, according to a White House press release.

Cattler is a graduate of the United States Naval Academy, and he previously served as National Intelligence Manager for the Near East from 2015 to 2017, director of the defense combating terrorism center from 2012 to 2015, and deputy director for intelligence from 2010 to 2012.

John Eisenberg, the new legal advisor to the National Security Council, previously served as a senior national-security official at the Department of Justice from 2006 through 2009.

According to a White House press release, during his time at the Department of Justice, Eisenberg advised the Intelligence Community, the Department of Defense, the National Security Council, and the Counsel to the President “on complex national-security matters.”

Before his time in government, Eisenberg was a partner at the law firm Kirkland & Ellis, LLP.

Special Assistant to the President and White House Coordinator for the Middle East, North Africa, and the Gulf Region: Derek Harvey

A retired United States Army Colonel, Derek Harvey was appointed as the first director of the Afghanistan-Pakistan Center of Excellence at U.S. Central Command in 2009. He is a former senior analyst for Iraq and joint staff directorate for intelligence, serving from November 2004 to December 2005, and he was a personal aide to David Petraeus, according to Salon.

Harvey was a supporter of the 2007 “surge,” the decision of President George W. Bush to increase the number of troops in Iraq. In his online writing, Harvey has argued that Barack Obama is responsible for the rise of ISIS and for the current state of Iraq.

“After President Obama and Secretary Clinton took their respective offices in 2009, I watched the hard-won gains of the surge erode as America disengaged politically and militarily from Iraq,” Harvey wrote in an op-ed for The Weekly Standard. “Even after I moved to the Afghanistan fight in late 2009 to help General Petraeus implement a strategy to stabilize Afghanistan, I heard frequently from Iraqi friends who felt increasingly abandoned by America…These Iraqis came to believe the administration did not want to stay, and American military commanders came to the same conclusion as the White House continually whittled down the size of the residual force they believed necessary to preserve the gains of the surge.”

According to Salon, Harvey also shares President Trump’s view that the United States must declare that it is at war with radical Islamic terrorism.

Special Assistant to the President and Senior Director for Non-Proliferation and Nuclear Issues: Christopher Ford

Ford has also worked in the White House before, as during the George W. Bush administration, he was deputy assistant secretary of state in the Bureau of Arms Control and International Security.

Yael Lempert is a holdover from the administration of Barack Obama; she served in this same position at the Obama White House, and presumably the Trump Administration will soon replace her with their own pick.

During her time as senior director of Israel, Egypt, Jordan and Palestinian issues, Lempert helped negotiate the Memorandum of Understanding with Israel, the largest American military-aid package in history, according to Forward.

Special Assistant to the President and Acting Senior Director for Russia and Central Asia: Jeffrey Edmonds

Another holdover from the Obama Administration, Jeffrey Edmonds is currently the acting senior director for Russia and Central Asia on the National Security Council.

Edmonds previously worked as director for Russia on the National Security Council from November 2014 to January 2017. Before that, he worked for the U.S. Intelligence Community as senior Eurasian military analyst, and he also was a team leader for the Defense Intelligence Agency Sunni Extremism and Counter Terrorism Team, according to his LinkedIn page.

Joel Rayburn has been an intelligence officer in the U.S. Army since 1992. He also served as an adivser to General David Petraeus, and he has written extensively about the Iraq war.

In 2014, after Nouri al-Maliki stepped down as prime minsiter of Iraq, Rayburn wrote in an op-ed for The Washington Post that Iraq had “reverted to the authoritarian muscle memory it developed under Saddam Hussein.”

“The current crisis in Iraq goes far beyond the question of who will lead the next government in Baghdad,” he wrote. “Iraqis have entered into a civil war whose logical conclusion is the breakup of the country. What we are witnessing in Iraq today is the beginning of a process that could become at least as destructive and bloody as the breakup of Yugoslavia. The longer it is allowed to unfold, the less likely it will be stopped, and the more likely it will spill over on a large scale to destabilize the surrounding region.”

Craig Deare since 2010 has worked as the Dean of Administration for the College of International Security Affairs, where he researches security issues in Latin America and the Caribbean.

Prior to his time at the College of International Security Affairs, Deare served for two decades in the U.S. Army, and he was deputy commander of the joint counterintelligence operations element in Honduras.

Special Assistant to the President and Senior Director for Asia: Matthew Pottinger

Matthew Pottinger is a former journalist who covered China for the Wall Street Journal from 2001 to 2005 and for Reuters from 1998 to 2001, according to the Council on Foreign Relations.

Pottinger’s career in journalism ended in 2005 when he began serving as a U.S. Marine; he completed three combat deployments from 2007 through 2010. He has worked with Michael Flynn, as Pottinger and Flynn co-authored the 2010 report “Fixing Intel: A Blueprint for Making Intelligence Relevant in Afghanistan.”

Special Assistant to the President and Senior Director for Strategic Assessments: Victoria Coates

Finally, Victoria Coates is known for serving as the national security advisor to Texas Senator Ted Cruz during the 2016 presidential election. She has previously written about foreign policy for conservative publications like RedState.

Coates has also worked as an advisor to Secretary of Defense Donald Rumsfeld while he was writing his 2011 book Known and Unknown: A Memoir.