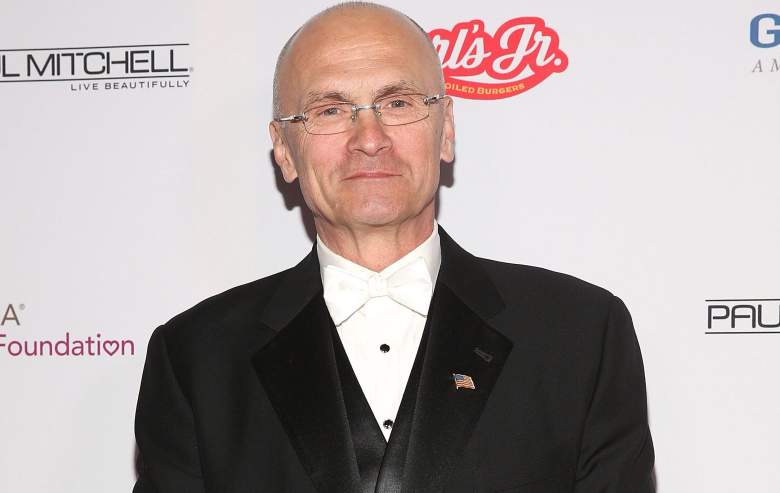 Andrew Puzder has withdrawn his name from consideration to the next labor secretary of the United States.

This comes after Puzder revealed last week that he once employed an undocumented immigrant as a housekeeper, something that in the past has tanked the confirmation of cabinet appointees. There were also the allegations surrounding Andrew Puzder’s ex-wife, Lisa Fierstein, who in the past accused him of domestic abuse but has since taken back her statements and fully backed him as labor secretary. She says she was counseled during her divorce proceedings to say that Puzder abused her and that she now regrets doing so.

Here’s what you need to know about Andrew Puzder and his ex-wife, Lisa Fierstein. 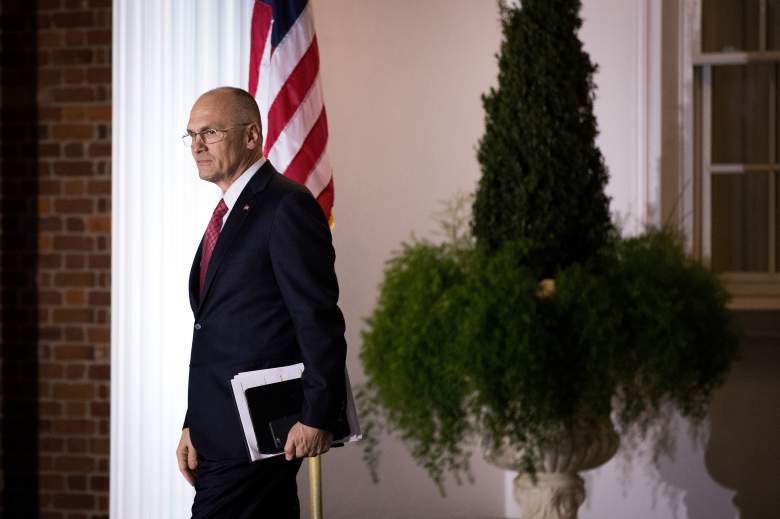 Andrew Puzder married Lisa Henning in 1973, when he was 23 years old. Andrew and Lisa had two children together.

According to the Riverfront Times, Andrew Puzder and Lisa Henning filed for divorce in 1987. They were awarded joint custody of the kids, with primary physical placement going to Lisa. Later, physical placement of the son was changed to Andrew.

Lisa remarried and now goes by Lisa Fierstein. Andrew remarried the same year that the divorce was filed; he has been married ever since to his current wife, Deanna Descher, with whom he had four children.

2. Lisa Accused Andrew of Abuse in Their Divorce Filings 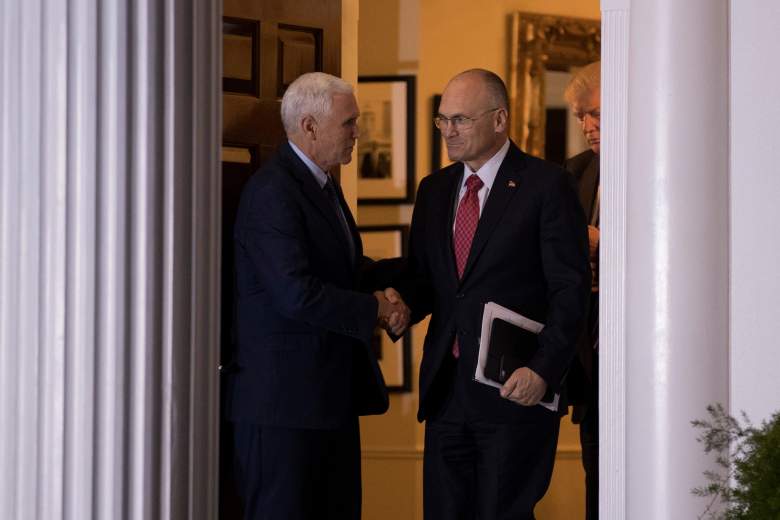 As originally reported by the Riverfront Times in 1989, in Andrew and Lisa’s divorce filings, she accused him of domestic abuse.

Specifically, she said that on one occasion, Puzder hit her, threw her on the floor and unplugged the phone as she was trying to call the police. Two other alleged instances are mentioned in the filing. With one, the couple’s neighbors allegedly called the police after Lisa and Andrew got into a shouting match, and this escalated into both of them throwing plates at each other. On another occasion, Lisa claims that Andrew punched her while they were driving in a car.

In a deposition, Puzder denied his wife’s accusations, saying that she came at him and so he grabbed her and pushed her away to protect himself. He acknowledged that police did respond to one confrontation, though. He also said that that plate-throwing incident happened after an argument about Lisa’s housekeeping habits, but he said that they did not throw the plates at each other. He completely denied the accusation that he punched her in a car, saying, “I recall no such incident.”

Before the divorce was filed, Lisa sought a protective order against Puzder. When asked about this, Puzder told The Riverfront Times, “My ex-wife filed something against me to get me out of the house. Anybody can challenge anything in court. It was dropped. This happens in a lot of divorce cases and it was settled between her and I pursuant to a consent decree. She filed a motion for violation of the consent decree, and we filed a motion for sanctions for a frivolous motion. She dropped her motion.”

A year after their divorce, Lisa sued Andrew, saying that he had inflicted “severe and permanent injuries,” according to Politico.

3. She Has Since Retracted Her Abuse Claims, Saying Her Attorney Had a Political Vendetta Against Puzder 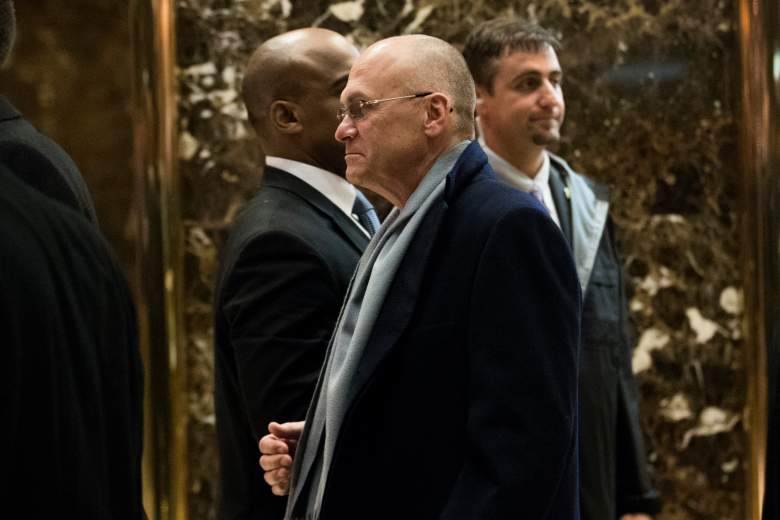 In December, The Riverfront Times reported on an email written by Lisa Fierstein to Andrew Puzder dated November 2016. In this email, Fierstein says that Puzder was not, in fact, abusive towards her and that she was simply counseled to say this during her divorce proceedings.

“You know how deeply I regret many of the rash decisions I made at that time and I sincerely hope that none of those decisions will become an issue for you at this time,” she writes in the email. “I impulsively filed for a divorce without your knowledge and was counseled then to file an allegation of abuse. I regretted and still regret that decision and I withdrew those allegations over thirty years ago. You were not abusive. I will most definitely confirm to anyone who may ask that in no way was there abuse. We had a heated argument. We both said things to one another that we regret to this day. I have always been grateful that we have been able to forgive one another for the hurt we caused caused each other.”

Andrew and Lisa even spent this past Thanksgiving together, according to this email. She concludes the email by saying, “I know you would be an excellent addition to the Trump team.”

According to CNN, Fierstein wrote a letter to the Senate Health, Education, Labor and Pensions Committee recently explaining that her husband was not abusive. She also says that the attorney who counseled her to make these claims had a vendetta against Puzder for political reasons.

Fierstein did not elaborate on who that attorney was or why they had a vendetta against Puzder. At the time of the divorce, Puzder was a well-known anti-abortion lawyer in Missouri.

4. She Appeared on ‘The Oprah Winfrey Show’ to Talk About the Alleged Abuse in 1990

Lisa did not simply make the allegations about her ex-husband in her divorce proceedings, though. Politico reported in early January that Lisa Fierstein once appeared on an episode of The Oprah Winfrey Show to talk about the incidents of alleged abuse between herself and her ex-husband. However, she wore a wig and glasses, and she was only referred to as “Ann” during the program.

For several weeks after the Politico report, nobody seemed to have a copy of this Oprah tape, but recently, Winfrey and her staff handed over the footage to senators on Capitol Hill. In a Washington Post report about Republican senators who were on the fence about confirming Puzder, it was mentioned that Senator Susan Collins “has reviewed footage of an ‘Oprah Winfrey Show’ interview with Puzder’s ex-wife, who once appeared in disguise on the program to discuss the multiple times she says that Puzder physically assaulted her in the 1980s.”

On Wednesday, Politico finally obtained footage from the Oprah Winfrey interview. During the broadcast, Fierstein says that her ex-husband threatened her after she accused him of domestic abuse, telling her, “I will see you in the gutter. This will never be over. You will pay for this.” She sat on a panel with several other women who said they had been abused by their husbands. The episode was an hour long, but Fierstein only spoke for about five minutes.

Although Fierstein did not reveal the identity of her ex-husband on the Oprah episode, she alluded to the fact that he was someone in the public eye. At the time, Puzder would have been known for his work as an anti-abortion lawyer and for authoring Missouri House Bill 1596, a law which prohibited state money from being used for abortions. The constitutionality of this law was upheld in the Supreme Court decision of Webster v. Reproductive Health Services in 1989. Puzder was also known for being chair of the Task Force for Mothers and Unborn Children for Missouri Governor John Ashcroft, a Republican.

In a recent letter to senators on Capitol Hill, Fierstein says that she went on Oprah because she wanted a free trip to Chicago.

“They asked me to appear as a panel member to discuss the issue of adult abuse,” she says in the letter, according to CNN. “I was hesitant but encouraged by friends and became caught up in the notion of a free trip to Chicago and being a champion of women and women’s issues.”

5. Puzder Withdrew From Consideration on Wednesday

Puzder officially withdrew his name from consideration to be labor secretary on Wednesday, February 15th. His confirmation hearing was scheduled for February 16th.

“After careful consideration and discussions with my family, I am withdrawing my nomination for Secretary of Labor,” he said in a statement. “I am honored to have been considered by President Donald Trump to lead the Department of Labor and put America’s workers and businesses back on a path to sustainable prosperity.”

This came as it was reported that at least four Republicans in the Senate planned to vote against Puzder, meaning that, assuming Democrats all voted Puzder down, he would not be confirmed. Cabinet nominees who do not appear to have support in the Senate tend to withdraw from consideration rather than actually going through with the vote. When asked why Puzder had made this decision, a source told CBS, “I think he’s very tired of the abuse,” referring to the negative media coverage over the past few weeks.

A number of factors contributed to the rejection of Puzder by those on Capitol Hill. The situation involving his ex-wife was certainly among them, and Democrats would have likely raised Fierstein’s allegations during Puzder’s hearing.

But some Republicans were also against Puzder’s nomination because he has supported comprehensive immigration reform and is further to the left on the issue than President Trump. On Wednesday, the conservative website National Review published an op-ed from the editorial board opposing Puzder for this reason.

“We have our disagreements with President Trump’s economics, but the emphasis on the interests of lower-income workers who are in competition with immigrant labor is important,” they wrote. “Trump should find a labor secretary who agrees with it and can be trusted to try to vigorously effect policies reflecting it. Surely this is a job that some American besides Andy Puzder is willing to do.”

Although some Trump cabinet nominees like Betsy DeVos and Jeff Sessions have faced tough confirmation hearings, Puzder is the first to not make it through.

Read More
Breaking News, Donald Trump, Politics
Andrew Puzder's ex-wife Lisa Fierstein once accused him of domestic abuse, appearing on the Oprah Winfrey Show, but she has since retracted her statements.