Luther Strange replaced Attorney General Jeff Sessions in the U.S. Senate and is now hoping to get a full term to represent Alabama in the U.S. Senate. He’s earned the endorsement of President Donald Trump, who has repeatedly tweeted his support for Strange. Trump also pushed for Strange on Friday.

Strange previously announced that he would be running for Sessions’ vacant seat in 2018. He was appointed to the seat by Governor Robert J. Bently. On August 15, Republicans in Alabama headed to the polls. A runoff election between Strange and Roy Moore, a former Chief Justice of the Supreme Court of Alabama, will take place on September 26. The general election is scheduled for December 12.

The 64-year-old Strange is from Homewood, Alabama, where he lives with his wife, Melissa when he’s not serving in Washington. They have two sons, Luke and Keehn.

Here’s what you need to know about Strange, the newest member of the U.S. Senate.

1. He Is the Former Attorney General of Alabama

Until February 2017, Strange served as the attorney general of Alabama.

He was elected to this position in 2010, defeating the incumbent attorney general, Troy King, in the Republican primary. He then beat Democrat James Anderson in the general election with 58 percent of the vote. Strange raised much more money than Anderson, spending $1.47 million on his campaign, compared to Anderson’s $374,000, according to AL.com.

During the campaign, Strange promised to fight public corruption and join a federal lawsuit challenging the legality of the Affordable Care Act, a promise he kept during his tenure as attorney general. Strange won re-election in 2014.

Strange had previously run for lieutenant governor of Alabama in 2006, but lost to Jim Folsom, Jr. Prior to becoming the state’s attorney general, Strange worked as a private attorney. He founded the law firm Strange LLC. 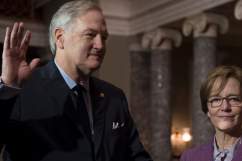 2. He Sued the Obama Administration Over Its Birth Control Mandate

Enjoyed visiting with my friends @Robert_Aderholt and @RepByrne in Mobile at @realDonaldTrump victory rally! pic.twitter.com/0cnkx0iihB

In 2012, while he was attorney general, Strange joined in on a lawsuit filed by EWTN Global Catholic Network against the Obama administration over the Affordable Care Act’s contraceptive mandate.

Strange said that this violated the religious freedom amendment in the Alabama state constitution, which states that “[g]overnments should not burden religious exercise without compelling justification.”

“The freedom of religion, and to believe as one sees fit, is our ‘first freedom’ under the United States Constitution,” Strange said at the time, according to WBTV. “The people of Alabama have recognized the importance of this freedom and have enshrined it in their Constitution as well.  Alabama law does not allow anyone to be forced to offer a product that is against his or her religious beliefs or conscience.”

This case ended up stretching on for a few years, but in 2016, The 11th Circuit U.S. Court of Appeals ruled against the Catholic television network. The Trump administration has hinted that it will not drop cases challenging the contraceptive mandate, which disappointed the Becket Fund for Religious Liberty. The non-profit has represented the non-profits in several lawsuits over the mandate.

“The government has a chance to do the right thing here. It got it wrong for five years in these cases, almost six years,” Eric Rassbach of the Bucket Fund told the Catholic News Agency. “And they can do the right thing by dropping their appeals that are in favor of the mandate, and admitting that they were wrong on the issue of the contraceptive mandate, as applied to religious non-profits.”

3. He Sued the Obama Administration Over Its Transgender Bathroom Order

I spent some time exercising my 2nd amendment rights during lunch today. pic.twitter.com/iNNIuQG1vI

“President Obama does not have legal grounds to rewrite the law,” Strange said at the time, according to AL.com. “Congress was absolutely clear that federal law allows schools to have separate facilities based on the ‘sex’ of the individual, not their gender preference.  This disturbing attempt to transform America’s classrooms into laboratories for the Obama administration’s social experiments will not stand up to the test of law.”

That same year, Alabama also filed a lawsuit against the federal government as Governor Bentley said he would refuse to take in Syrian refugees.

“As your governor, I will not stand complicit to a policy that places the citizens of Alabama in harm’s way,” Bentley said, according to AL.com.

4. He is Nearly Seven Feet Tall

Wishing you a #MerryChristmas from our family to yours! #blessed pic.twitter.com/sickxZXd95

For this reason, Strange earned himself the nickname of “Big Luther” in Alabama. While attending Tulane University Law School, Strange played basketball, attending the school on a basketball scholarship.

The nickname “Big Luther” was embraced by Strange in many of his political advertisements during his campaigns. Team Big Luther” t-shirts were also printed.

5. Strange Was Appointed By Governor Robert Bentley, Who Faced Impeachment 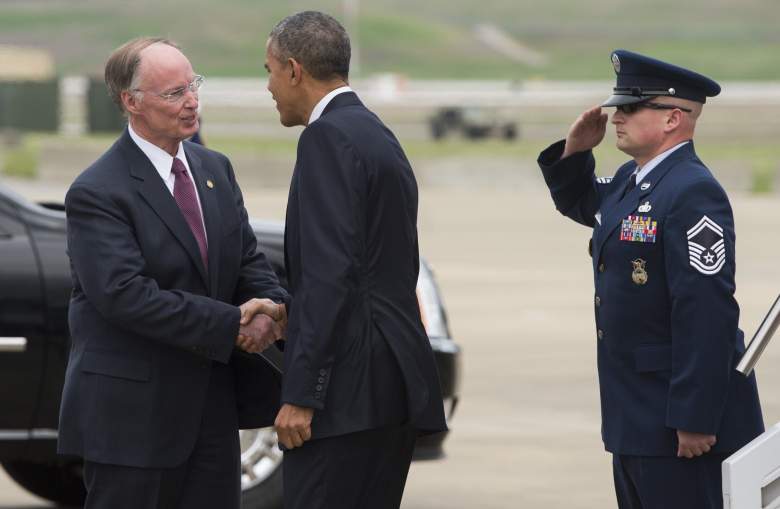 Alabama Governor Robert Bentley, who appointed Strange to the Senate, faced potential impeachment. In April, NBC News reported that Bentley decided to resign rather than be impeached.

In March 2016, Bentley fired Alabama Law Enforcement Agency secretary Spencer Collier, saying that Collier had misused state funds. Collier then held a press conference telling reporters that Bentley had engaged in an extramarital affair with an aide, Rebekah Caldwell Mason. Bentley admitted to making inappropriate comments towards Mason but denied having a physical affair with her.

The state auditor of Alabama then filed an ethics complaint, saying that Bentley and Mason had used “state property and resources in furtherance of their personal relationship.” He also alleged said Mason violated the law because she did not register as a lobbyist when she should have; Mason was being paid through a nonprofit organization that advances the governor’s agenda and was not on the governor’s payroll, according to AL.com.

State Representative Ed Henry officially filed a resolution calling for Bentley’s impeachment in April 2016. In November, the Alabama state legislature put these impeachment proceedings on hold, saying that the attorney general’s office was conducting their own investigation, according to The Washington Post.

The fact that Bentley just gave a Senate job to the man who was reportedly conducting an investigation into his affair raised conflict of interest concerns, but that didn’t stop Strange from receiving enough votes to make the runoff.

Loading more stories
wpDiscuz
1
0
Would love your thoughts, please comment.x
()
x
| Reply
Luther Strange is running for a full term in the U.S. Senate after replacing Jeff Sessions and he has President Donald Trump's endorsement.