A plane crash in Cuba is thought to have killed 8 people. The crash involved an Aerogaviota flight on April 29. The incident happened close to the town of Las Terrazas which is in the city of Pinar del Rio. The incident is so far being reported by Cibercuba and has not been confirmed by official sources. It was a domestic flight that took off from Baracoa Airport.

The number of fatalities was initially thought to have been as high as 39. The Miami Herald, citing a government source, has said that the number of dead is thought to be around 8. Those killed are thought to member of Cuba’s military.

1. ‘There Are No Survivors’

PLANE CRASH #Aerogaviota Antonov AN26 reported crashed in remote are of Cuba. Local media reporting 39 on board. #PinarDelRío pic.twitter.com/rmQpNYMPNj

The Cibercuba report says that “there are no survivors.” That report is based on a source who is a relative of a crew member. That source said, via Google Translate, “Although it’s nothing official, members of a commission came to my house to let me know what happened.”

2. The Flight Was Not Picked Up by Flight Radar

We’re following reports of a crash of an Aerogaviota An-26 in Cuba, however it does not appear we have data for this flight.

Online flight radar tracking service Flight Radar 24 has tweeted they are looking into reports that the plane is missing.

3. Aerogaviota Is a Mainly Domestic Airline With One International Route

Aerogaviota was originally started by the Cuban army in the 1990s. The fleet consists of 22 planes including Antonov An-26, ATR 42-500 and Mil Mi-8 aircraft. The only international route flown is to Kingston and Montego Bay in Jamaica. That airline’s hub is at Jose Marti International Airport in Havana.

4. This Incident Would Be the 5th Fatal Aviation Crash in 2017

According to Plane Crash Info, this is the 5th major fatal aviation crash in 2017. The last occurred in Zimbabwe on March 27 when six people were killed while traveling in a Britten-Norman BN2 Islander.

The most recent incident involving an An-26 was a fire which caused a South Supreme Airlines to crash in South Sudan on March 27. Nobody was killed buy 37 people were injured.

5. The Area Where the Aircraft Was Located Is ‘Difficult to Access By Land’

ABC Miami reports that the aircraft is in Las Lomas de San Cristóbal. While Cibercuba calls the area “difficult to access by land.” 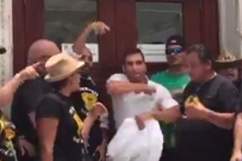 Loading more stories
wpDiscuz
3
0
Would love your thoughts, please comment.x
()
x
| Reply
It is thought that multiple people have been killed in a Cuban plane crash.