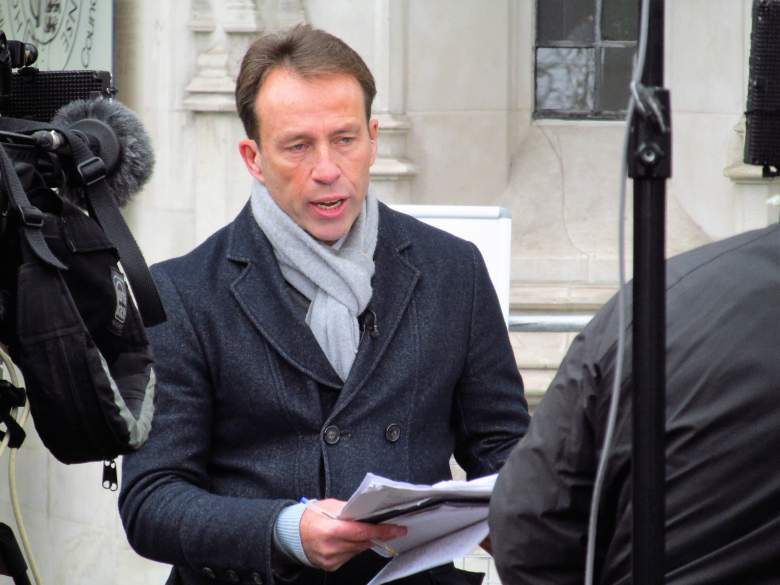 BBC journalist Ben Brown was involved in an on-air incident earlier today, where he made contact with a woman’s breast. The woman had walked into a live shot and interrupted an interview Brown was conducting. Brown was trying to get the woman out of the shot when the contact occurred.

Here’s what you need to know about the incident and Brown:

1. The Incident Took Place During a Live Interview

In the video, available above, Brown is conducting an interview with BBC’s assistant political editor Norman Smith in Bradford, when a woman walks into the middle of the shot saying “absolutely fantastic.” Brown can be heard saying “sorry” and “thank you”, as he reaches out and puts his hand on the woman’s breast and pushes her out of the way. The woman, who seemed slightly surprised, responded by slapping Brown on the shoulder before she walked away.

Brown was conducting the interview with Smith to get his reaction to the Labour Party’s election manifesto, according to the New York Post.

Brown had posted on Twitter that he was going to be in Bradford for Corbyn’s launch of the manifesto.

In Bradford for Corbyn's launch of the #LabourManifesto – talking to Sarah Champion at 12.30 – send me your questions to #BBCAskThis

2. Brown Said the Incident Was Unintentional

Brown posted the message below on Twitter after the incident. He says the contact was “completely unintentional.”

According to The Guardian, the BBC would not confirm if there had been any complaints about Brown’s actions but said that no further action would be taken against Brown as it was “clearly an accident”.

The incident with the woman wasn’t the first time Brown has had to deal with an uninvited guest during live broadcast. In the video below, Brown gets stuck with a ‘FUCK” sticker during a broadcast that took place during a protest near the Treasury and Supreme Court buildings. A women then jumps into the shot, and Brown can be seen pushing her out of the frame.

Not all Twitter users thought Brown’s actions were unintentional and harmless. Several users posted comments about the incident on their own pages and on Brown’s response to the incident.

One Twitter user, @F1grimreaper, called the incident a “sexual assault.”

@WestYorksPolice will you be following up this sexual assault carried out by @BenBrownBBC in this clip live on @BBCNews ?? #BenBrown https://t.co/l075mQKVwz

Another user, @PhilBird10, said “you’ll find it hard to justify physically moving someone away, let alone by grabbing an intimate area”.

Other users came to Brown’s defense, sharing the sentiment that the move was unintentional.

@PhilBird19 @BenBrownBBC Oh please, the silly woman shouldn't have been there. If it hadn't have been boob it wouldn't even be a story.

4. Brown Has Been a Special Correspondent with BBC News Since 1998 and Is an Award-Winning Journalist

According to Brown’s bio page on BBC, Brown is one of BBC’s most experienced war correspondents. Recently, he also covered domestic events for BBC News such as the Queen Mother’s funeral and the firefighters strike.

He joined BBC TV News in 1998 and was a foreign affairs correspondent until 1991. He reported on the fall of the Berlin Wall and the Gulf War, from Saudi Arabia and Kuwait, according to BBC News.

His coverage in Chechnya for the start of the civil war won him several awards including the Bayeux War Correspondent of the Year Award and the Golden Nymph Award from the Monte Carlo Television Festival. In 2000, Brown won a Royal Television Society award for his report he did while trapped inside a farm in Zimbabwe that was invaded by armed militants. In 2001, he won the Bayeux war correspondent award again. This time, for his coverage of the intifada in Israel, according to BBC News.

Brown is married and has three children.

5.Brown Worked in Radio News Before Joining The BBC.

Brown was born in 1960 and raised in Ashford, Kent. He was educated at Sutton Valance School and Keble College, Oxford. Next he went to the Cardiff Centre for Journalism Studies and received a diploma with distinction, according to BBC News.

After college, Brown took a job with Radio Clyde as a reporter, before becoming a reporter for Radio City Liverpool in 1985. In 1986, Brown joined Independent Radio News, covering major stories from superpower summits to the Hungerford massacre.

Loading more stories
wpDiscuz
1
0
Would love your thoughts, please comment.x
()
x
| Reply
BBC journalist Ben Brown appeared to touch a woman's breast while trying get her out of a live shot. Find out more about the incident and Brown here.