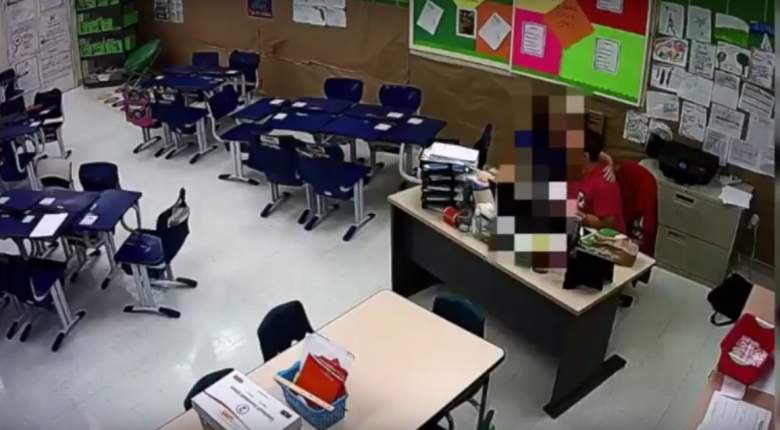 Surveillance video showing teacher Brian Kornbluth kissing a 10-year-old boy on the lips has been released just days after he pleaded guilty to a battery charge.

The 28-year-old teacher at Somerset Academy charter school in Boca, Florida was accused of trading candy for kisses inside of the school and was arrested back in February.

On May 16, Kornbluth pleaded guilty to the battery charge and was sentenced to one year of probation. In exchange for the guilty plea, the state agreed to withhold a finding of guilt, which means that the teacher can eventually have the conviction expunged from his record.

Following his arrest, police said that they caught Kornbluth on camera saying he lured one of the students into his room using gummy bears.

Kornbluth’s attorney Kristine Rosendahl said to NewsChannel 5 that Kornbluth and the male student did kiss, but it was the student who initiated the kiss, explaining that the boy had “familiarity” with the teacher. Kornbluth had been the boys’ babysitter for some time.

Watch the disturbing video released by the court below. The victim’s face and body have been blurred out.

The video came out after one teacher at the school told the principal that Kornbluth requested certain students to be part of his class.

Authorities said that the boy’s sister told officers that she and her brother walked into Kornbluth’s classroom to get some gummy bears when he kissed them both on the lips. The arrest report shows that Kornbluth admitted to kissing the boy, but not his sister.