Morning Joe hosts Mika Brzezinski and Joe Scarborough revealed in a Washington Post op-ed that President Donald Trump‘s top staffers told them the National Enquirer would publish a negative story about them unless they “begged” Trump to have the story dropped. It’s not the first time Trump has used the tabloid against his enemies.

In a recently published New Yorker interview, American Media Inc. CEO David Pecker said the success of the National Enquirer since January 2016 has largely been because of Trump. The tabloid frequently ran negative stories about Trump’s opponents, from the infamous story that linked Senator Ted Cruz’s father to President John F. Kennedy’s assassination, to the constant stories about Hillary Clinton’s health.

Trump even once wondered why the Enquirer has never won a Pulitzer Prize. “I’ve always said, ‘Why didn’t the National Enquirer get the Pulitzer Prize for Edwards?'” Trump said during a news conference in Ohio during the 2016 presidential campaign.

Here’s what you need to know about Trump’s relationship with the National Enquirer, which goes back decades.

Photo by: Nathan Congleton/MSNBCMika Brzezinski on the set of Morning Joe.

In their Washington Post op-ed, which was a direct response to Trump’s Twitter insults of Brzezinski, the Morning Joe hosts revealed that the National Enquirer was planning to run a negative story about them. Brzezinski and Scarborough wrote:

This year, top White House staff members warned that the National Enquirer was planning to publish a negative article about us unless we begged the president to have the story spiked. We ignored their desperate pleas.

During the show, Scarborough and Brzezinski gave more details about it. Scarborough said they got a call about the tabloid’s plans to run a negative story. White House staff told them to apologize to Trump for the negative comments they made about him recently, or the story would be published.

“Three people at the very top of the administration calling me, and the response was like, are you kidding me? I don’t know what they have,” Scarborough said. “Run a story. I’m not going to do it. The calls kept coming. and kept coming.”

Brzezinski said the tabloid was “pinning the story” on her ex-husband, journalist Jim Hoffer. They were even calling her two children, she claimed. Brzezinski said that whatever the National Enquirer had was a “lie.”

For his part, Trump had a different story. He tweeted after Morning Joe ended:

Watched low rated @Morning_Joe for first time in long time. FAKE NEWS. He called me to stop a National Enquirer article. I said no! Bad show

On June 2, the National Enquirer did publish a story about Scarborough and Brzezinski, claiming that they were behind the couple’s “rush” into an engagement after their reporters “threatened to expose their illicit affair.”

The National Enquirer also issued a statement, denying any White House involvement in the story. They also denied threatening the Morning Joe hosts or their children.

New York Magazine and The Daily Beast reported that Jared Kushner, Trump’s son-in-law and a senior White House advisor, had a role in the drama. Scarborough texted Kushner in mid-April about the National Enquirer story and Kushner told Scarborough that he needed to apologize to Trump to get Pecker to kill the story, New York Magazine’s sources say.

Scarborough tweeted that Trump’s tweet was a “lie” and that he had text and phone records to prove that he spoke with Trump staff. Scarborough added that he hasn’t spoken with Trump personally in “many months.”

Yet another lie. I have texts from your top aides and phone records. Also, those records show I haven't spoken with you in many months. https://t.co/TZWiElo6Gs

2. The National Enquirer Paid $150,000 for a Story on Trump’s Affair With a Playboy Model & Didn’t Publish It

In November 2016, The Wall Street Journal reported that American Media, which owns the National Enquirer, paid a former Playboy centerfold model $150,0000 to tell her story about an affair with Trump. However, the tabloid never published the story. The Journal story was published just days before the 2016 election.

The Playboy model was Karen McDougal who was the 1998 Playmate of the Year. She claimed to have had an affair with Trump in 2006 and 2007, which he was married to eventual First Lady Melania Trump.

The tabloid claimed the $150,000 was for McDougal to write a fitness column for two years, as well as the rights to any stories she might have about a relationship with a married man. Trump’s campaign called McDougal’s claims “totally untrue.” 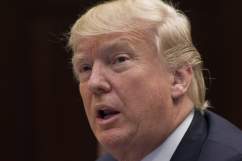 3. Trump Was Often an Enquirer Source Himself & Wrote Columns for the Tabloid

As the New Yorker noted in its recent profile of Pecker, Trump himself would often act as an anonymous source for the Enquirer.

“When there was something going on in New York, David would talk with Trump about it. Trump provided David with stories directly,” an American Media (AMI) employee told the New Yorker. “And, if Donald didn’t want a story to run, it wouldn’t run. You can put that in stone.”

Trump was often the star of National Enquirer headlines during the 1980s and 1990s, but not because of positive stories. When Pecker became CEO of AMI in 1999, the negative Trump stories started disappearing.

“David thought Donald walked on water,” a former Enquirer employee told the New Yorker, adding that Pecker used Trump’s private plane for trips to Florida. “Donald treated David like a little puppy. Donald liked being flattered, and David thought Donald was the king. Both have similar management styles, similar attitudes, starting with absolute superiority over anybody else.”

During the early days of the 2016 campaign, Trump was even wrote columns for the Enquirer. The Washington Post noted that one column – “Donald Trump: The Man Behind The Legend!” – looked awfully similar to a 2011 one with the exact same headline.

During the 2016 presidential campaign, the Enquirer ran story after story that put Trump’s competition in a negative light. Texas Senator Ted Cruz was a frequent target, with the tabloid trying to link his father to Lee Harvey Oswald, the man who killed President John F. Kennedy.

In March 2016, the Enquirer ran a list of five Cruz “mistresses.” There was so much speculation that Trump planted the “mistresses” story that his campaign issued a statement denying it (while also calling the senator “Lyin’ Ted Cruz”).

However, New York Magazine reported in October 2015 that Trump was behind the “Bungling Surgeon Ben Carson Left Sponge in Patient’s Brain!” story. In that story, the tabloid claimed Dr. Ben Carson (now Trump’s Housing And Urban Development Secretary) even “left a sponge” in a patient’s brain.

Trump spokesperson Hope Hicks told New York Magazine that there was “absolutely no truth” to the idea that Trump provided the story. Pecker also called it “utterly false,” telling the magazine, “We did what the National Enquirer has always done, our investigative reporters went back and poured through numerous legal documents to discover the details that led to our exclusive coverage of malpractice claims against Ben Carson.”

The Enquirer also often ran stories about Hillary Clinton’s health, once reporting that Clinton had a “crippling killer virus” and a “troubling addiction.” In May 2017, they published a story claiming that Clinton was closer to being arrested after Trump fired FBI Director James Comey.

The Enquirer endorsed Trump for president, with a headline in March that read, “Trump must be Prez!” It was the first national publication to endorse Trump.

5. In 2013, Trump Suggested Pecker Would Make a ‘Brilliant Choice’ for Time Magazine CEO

All of this extra attention to the Enquirer comes as speculation swirls over AMI’s interest in buying Time Inc. Back in January, The New York Post reported that the company was interested in buying the publisher, which includes Time Magazine, InStyle, People and Sports Illustrated. The New Yorker notes that Pecker would need a partner in order to buy Time Inc. and he’s looking for one.

David Pecker would be a brilliant choice as CEO of TIME Magazine — nobody could bring it back like David! http://t.co/lLMjQh2iz9

Time magazine should name David Pecker of American Media to be its top guy…but they are not smart enough to do that!

“David Pecker would be a brilliant choice as CEO of time Magazine—nobody could bring it back like David!” Trump tweeted. “@time Magazine should definitely pick David Pecker to run things over there—he’d make it exciting and win awards!”

Pecker’s friend Ron Burkle told the New Yorker that Time Inc. was “considering” Pecker, “but the boards of companies like Time Warner can be very political, and they weren’t going to turn the company over to the guy who runs the Enquirer.”