California resident Dale Pearson was near his home when he looked into the ocean and saw something thrashing about. He decided to get a closer look, grabbing his cell phone to capture some video — and, now that he has shared that video, it has gone viral.

Pearson and one of his friends rushed down to the ocean, thinking they could be of assistance to whatever may have needed help. Pearson told the Huffington Post that he first thought that he was seeing a beached whale or struggling hammerhead shark, however he got quite the surprise as he got closer. It turns out, it was a great white shark, about 14 feet in length, swimming in water that was about 3 feet deep.

Pearson and his friend actually went into the water, able to get a pretty incredible vantage point. Pearson made sure to stay behind the shark and to keep himself in water that was just knee-deep where the shark couldn’t swim.

As for why the shark may have been struggling, you can probably see two open wounds on its back. Pearson believes the injury may have been caused by a boat propeller. The injury was not believed to be life-threatening and Pearson noted that the shark was not stuck. Within a couple of days, the shark had swam off. Pearson believes that the shark came into the shallow waters searching for food. Stingrays are very popular in the area — and even stung Pearson and his friend, causing the bloody injuries seen at the end of the video.

Pearson added a message to beachgoers in the Baja, California area.

“If you’re wondering if there’s great white sharks here in the Sea of Cortez the answer is absolutely,” he said. 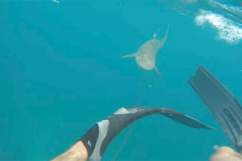 Loading more stories
wpDiscuz
2
0
Would love your thoughts, please comment.x
()
x
| Reply
A great white shark thrashing around in shallow water was caught on video. The shark had been injured and may have been trying to find food.