Sofia Magerko and Dasha Medvedeva were live streaming on Instagram when their car crashed into a light pole. (YouTube)

A 16-year-old beauty queen from Ukraine live streamed her own death on Instagram when she filmed herself and a friend drinking and driving in the early morning June 29.

Sofia Magerko, who won a local beauty contest in Izyum, was killed when the BMW her 24-year-old friend Dasha Medvedeva was driving rocketed into a lamp post at a high rate of speed in the Kharkiv region. After hitting the post, the vehicle then “flew into a tree,” media reports say.

Magerko died immediately from the force of the crash while Medvedeva died on her way to the hospital from severe injuries.

In the video, Magerko and Medvedeva are seen laughing, screaming and singing to music inside the car while drinking out of a bottle of an unknown liquid while the car is stopped. One of them says “hi boys” to the stream’s audience as the pair continue to joke and laugh while listening to the music. Suddenly, Medvedeva pulls away in the BMW with the light inside the car still on.

Only a few seconds after pulling away from the stop, the loud sound of the car crashing into the post can be heard and the voices turn silent before the video goes black. Moments later, the voice of at least one bystander can be heard tending to the two girls as he arrived at the scene and realized there was at least one fatality.

“F**** there is a dead body there, another one fell out of the car,” the male’s voice is heard saying. The voice is then heard pleading for assistance from what would seem to be emergency personnel.

Watch the video of the live stream below:

NOTE: The video below may be disturbing to some.

According to local media reports, police have not yet confirmed a cause of the accident, saying that experts are still working on it. 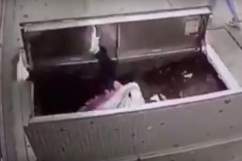 Loading more stories
wpDiscuz
26
0
Would love your thoughts, please comment.x
()
x
| Reply
Sofia Magerko and her friend were drinking alcohol and driving in a BMW when it crashed head-on into a light post. She live streamed the ordeal on Facebook.