A PenFed Credit Union blimp advertising at the US Open national golf championship has caught fire and gone down in flames in Erin, Wisconsin. Nobody watching appeared to be hurt in the crash, which happened beyond the spectators watching the tournament. However, one Twitter user there who also posted a video of the crash said that the pilot “appeared to bail out.” According to the Milwaukee Journal Sentinel, “One person – presumably the pilot – was transported by Flight for Life from the area of the crash just after noon.”

A manned blimp unaffiliated with FOX Sports or the #USOpen crashed near the course today. We will provide more details as they're available. pic.twitter.com/QEAk8tiU0K

A cause is not yet known, but witnesses say the blimp appeared to be deflating before crashing. Australian golf journalist Evin Priest said about the crash, “The US Open blimp has crashed in the woods outside the course. Smoke seen.” The Milwaukee Journal Sentinel adds, “There were no immediate details of what happened but some reported that the blimp apparently was on fire before it hit the ground near Highway 83 and Highway 167.”

Just got to the #USOpen and the blimp caught fire and crashed. People parachuted out. pic.twitter.com/1lDi3VkXCu

A nearby Erin resident, Alex Grimm, tweeted that the blimp crashed in his grandmother’s farm field. Earlier today, the company hired to fly the blimp tweeted this:

The US Open was founded in 1895 and runs this year from June 12 to June 18 with a prize of $12 million. To learn how to watch the tournament without cable, click here. 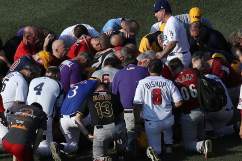 Read More
Fire, Golf, US Open
Follow Heavy ↓
A PenFed Credit Union blimp advertising at the US Open national golf championship has caught fire and gone down in flames in Erin, Wisconsin.