The massive “Detwiler Fire” near Yosemite National Park in California has burned through 48,000 acres and is 7% contained.

The fire had doubled in size overnight on July 18, reaching 45,724 acres and was 7% contained. Its pace slowed considerably though, and, by 9 p.m. July 19, in the latest update, the fire had reached 48,000 acres with 7% contained. Twenty-nine structures were destroyed with 5 damaged.

The night before, the blaze had burned 25,000 acres and was continuing to grow, threatening an entire town and hundreds of structures and turning skies orange.

The blaze in Mariposa County, California led to “thousands of evacuations” from the Town of Mariposa not far from Yosemite National Park as the flames drew near the community, imperiling the historic Gold Rush town.

The fire grew during the night:

Videos and posted on social media documented the size of the threat. “This is just insane,” wrote one Twitter user who posted a dramatic photo of the fire.

Update 8:25 PM. Sorry to blow everyone's feed up but this is just insane. pic.twitter.com/l4DQEIVkdB

1. The Fire Was Called ‘Very Dynamic’ & Extreme By Fire Officials

This just in – #DetwilerFire is now 25,000 and 5% contained. Air and ground resources continue to fight this massive blaze in Mariposa Co. pic.twitter.com/pzn8BECz6F

According to Cal Fire, the Detwiler fire started on Sunday, July 16 at about 4 p.m. As of 8:30 p.m. on July 18 on the west coast, 1,500 structures were threatened, eight were destroyed and one was damaged. Things became worse by the morning of July 19.

#Breaking the #DetwilerFire is now 45,724 acres and is 7% contained. Nearly doubled overnight pic.twitter.com/eihtgYhkqW

The number of structures destroyed – eight – had remained the same overnight, though.

You can see the list of road closings, evacuations, and shelters here.

This made my heart drop to my stomach. Prayers for our town needed tonight?? #DetwilerFire pic.twitter.com/TWe3o3yLaw

Amazing helmet-cam video from one of the helicopters fighting the #DetwilerFire. Video: Jacob Barber pic.twitter.com/fTxNOAycVV

That wasn’t all. “Traffic along HWY 149, 49N and 49S will be impacted as a result of road closures. The fire continues to threaten power lines to the south of the incident, which supply power to Yosemite National Park. Firefighters on the ground as well as aircraft are actively working to contain and suppress the fire,” reported Cal Fire. 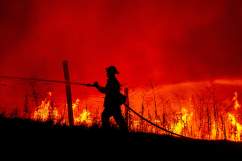 2. Mariposa, a Historic ‘Gold Rush Town,’ Was Threatened by the Fire

Churches, schools, and community halls welcomed evacuees from the Town of Mariposa as the Detwiler Fire approached. Mariposa, “first settled in 1849, is the southernmost in the Gold Rush chain of towns,” according to Yosemite.com.

Only vehicles we are seeing are fire personnel going through #Mariposa to #DetwilerFire , we are live on @CBS47 until 7 pic.twitter.com/dxr8eUnTyl

Evacuees coming to Oakhurst EV Free Church. They had no power and were evacuated from homes in Mariposa #Detwilerfire pic.twitter.com/C8SoHoNLrg

Firefighters were working hard to protect the town.

Novato firefighters are protecting the town of Mariposa from the advancing Detwiler Fire. pic.twitter.com/wVEz2p53zy

Traffic earlier in the day was confined to a narrow, winding road.

This was how some people trying to enter #Mariposa earlier had to do it — using the narrow, winding Old Highway Road. #DetwilerFire pic.twitter.com/WbRnZtVAjv

Downtown Mariposa looks like an eerie ghost town because of the #DetwilerFire pic.twitter.com/D37yplOn0d

Mariposa lies in the shadow of Yosemite. “Mariposa has retained the small town charm of a bygone era, so you won’t see strip malls or chain stores, and Mariposa remains one of a handful of California towns without a stop light,” Yosemite.com reports.

Found a cabin w/o power in Yosemite after evacuating the #DetwilerFire. It doubled in size again overnight to 45k acres. Time to move again pic.twitter.com/9ljKxQEyEQ

“With Yosemite National Park in Mariposa’s backyard, tourism played a role as far back as the 1870s, though it didn’t really take off until automobile travel did too. Nowadays, about four million people visit Yosemite National Park each year. Over the years, the county has become host to a wide variety of popular annual festivals. Whichever month you arrive in, you’re bound to find something fun going on.”

People posted prayers for the town and its people on Twitter. “Hoping my family in Mariposa is going to be ok tonight ?? #DetwilerFire,” wrote one woman on Twitter.

3. Dramatic Photos & Videos Captured the Extent of the Blaze

Photos and videos captured the fire’s eerie orange glow and haze. “Firefighters executed an all out air attack on the massive flames from the Detwiler Fire, ripping across hillsides, and over mountain tops near the community of Mariposa,” reported CBS Sacramento.

DEVELOPING: California Gov. Jerry Brown declares state of emergency in Mariposa County due to #DetwilerFire, which has grown to 25,000 acres pic.twitter.com/jAXbbIzuR7

#DetwilerFire close friend just told us fire is at the hospital and their house is next #tragic #MariposaCounty fortunately they are safe. pic.twitter.com/Dil8RMLkf6

8 structures destroyed, 1,500 threatened in the #DetwilerFire. #Video from our crew on the scene shows ash falling like snow. pic.twitter.com/g5atjpdksi

#DetwilerFire is dangerous because of this. This is what it looks like near Mariposa. Drought killed Millions of trees. pic.twitter.com/PsYDG8CVPU

California Governor Jerry Brown has declared a state of emergency as a result of the fire.

Cal Fire’s spokesman told ABC30 the fire was a “full on challenge.”

The fire’s cause remains under investigation.

July 18, 2017 Factsheet for the #DetwilerFire – the latest evacs, road closures and conditions. pic.twitter.com/AFQkvtQNk3

Here are some facts on the Detwiler Fire from Cal Fire, as of July 18:

You can see a map of the Detwiler Fire here:

#RedFlagWarnings in effect for central & northern parts of CA for high winds & low humidity Use caution outside: https://t.co/3Or0ygzF3r pic.twitter.com/u56dBUiqyH

“Can’t say enough thanks to the brave firefighters that are part of the strike team to help fight the #DetwilerFire @CALFIRE_PIO,” wrote one man on Twitter, echoing the words of many.

5. The Detwiler Fire Is But One of Many California Wildfires in 2017

You can see above that the Detwiler Fire is only one of a series of wildfires in California in 2017, but it’s a major one.

“I have many friends affected by the #DetwilerFire. I am hopeful that the firefighters can get this under control soon. :(!!!” wrote one distraught Twitter user.