President Donald Trump will be speaking before another group of young leaders, this time to the American Legion Boys Nation and Auxiliary Girls Nation. The speech began at 3:00 p.m. ET and follows a highly-controversial speech delivered at the National Boy Scout Jamboree earlier this week.

During the speech, Trump told the students to realize their potential, while also inserting a few lines about how “historic” his election victory in November was and how good job numbers have been since he took office. At one point, Trump asked the students if they were upset that they were there. The students said “No,” and Trump asked, “But you’re all really happy that you’re here, right?”

The speech was delivered hours after Trump announced on Twitter that he is reversing President Barack Obama’s decision to lift a ban on openly transgender individuals from serving in the military. The move was criticized by lawmakers on the left and right, and it was reported that the Pentagon was surprised by the news. Reuters reported that the Pentagon referred questions about the ban to the White House.

The address to the American Legion Boys Nation and Auxiliary Girls Nation groups comes two days after Trump’s Surprisingly political speech at the Boy Scouts Jamboree. Typically presidents use the speech to offer leadership advice or make nonpolitical statements. But Trump delivered a speech that was similar to the messages delivered at his rallies.

The Boy Scouts Jamboree speech included boasts about Trump’s victory in November 2016 and how he wants to see the end of Obamacare. The speech also included a story about yachts.

“You know, after seven years of saying repeal and replace Obamacare we have a chance to now do it. They better do it. Hopefully they’ll do it,” Trump told the Boy Scouts, referring to the promises made by Republican Senators.

Many parents and past Boy Scouts members were surprised by the speech, and critics compared it to a Hitler Youth rally.

“As a Scout leader, my stomach is in knots about what Trump did today. If you haven’t watched it yet, don’t. It’s downright icky,” Connecticut Senator Chris Murphy tweeted.

The American Legion Boys and Auxiliary Girls Nation are two youth groups whose members represent their states as “senators” and attended mock lawmaking events in Washington, D.C. this week.

Here is the full transcript of the president’s speech:

THE PRESIDENT: We actually just met, for the audience. We just met. (Laughter.) We took pictures, right?

THE PRESIDENT: That’s right. Well, thank you very much. It’s my great honor to officially welcome Boys and Girls Nation to the White House. Really special place, isn’t it though? Isn’t it great? (Applause.) Great.

And I want to congratulate you — what a job you’ve all done — basically on all you’ve achieved at a very young age. It’s incredible. For decades, the American Legion has brought the best and brightest to the White House. This has taken place for many years.

Each of you were chosen out of the many thousands of people, that — you know, they’re all calling in, they want to get into the White House. Is anybody upset that you’re here?

THE PRESIDENT: Okay, but you’re all really happy that you’re here, right? (Applause.)

But you represent your state, and that’s a very, very important element too. And a very important factor in getting here. You all share incredible talent and drive.

Most importantly, you have each other to really work with and to help. And you help each other, you’re teammates, you love our country — that’s something we all have in common, right? We love our country, right? (Applause.)

While you come from all corners of our great landscape, you are all united by your devotion — total devotion — to our great American flag, our freedom, and the principles that bind us together as one people and one nation.

For more than a century, the American Legion has taught young citizens about the importance of patriotism and loyalty to our country. And through it all, there’s nothing like what you’re doing today and what you’ve achieved over a very, very short period of time. We want to thank you, and we want to thank the national chapters and everybody else.

We have to really give a special thanks to Commander Charles Schmidt. Where’s Charles? Where is Charles? (Applause.) Come here. Come here, Charles. Come on up here, Charles. What a great job. Come on. See, he wants to give you all the credit. (Laughter.) Who served in the Air Force for 28 years and now advances the Legion’s proud legacy. Thank you, Charles. (Applause.)

I want to thank you for your commitment to these incredible students and to our country. Thank you. (Applause.)

THE PRESIDENT: Wow. That’s pretty good, Bob. That’s as good as I’ve ever heard. (Laughter.) That’s fantastic. Come on over here, Bob. Be careful. We don’t want to see Bob go down. Do you agree with that? (Laughter.) Because he will never forget that. Come on, Bob.

This year, Bob is celebrating his 35th year helping to lead Boys Nation — all as a volunteer. Thank you very much, Bob. That’s so great. (Applause.)

And, Bob, I know everyone here today agrees when I say thousands of young Americans are better patriots because of your incredible and steadfast service. Right, fellas? Right? (Applause.)

Through this program, countless young people like you have been inspired to protect American interests and to promote American values. Right? Many of those who have been in your place have gone on to become governors, members of Congress, generals, and one even became a President. You know who that one was?

Our nation had just welcomed home our brave heroes whose spirit and courage achieved victory over tyranny in World War II. Just over twenty years later, young men and women like you watched a man land on the moon and dreamed of new frontiers in space.

In 1987, Americans all across this nation joined their hearts with President Ronald Reagan in the hope, the prayer, and the conviction that the Berlin Wall would crumble in the face of truths, justice, and freedom. You know all about that.

THE PRESIDENT: In each of these moments, and so many others, America triumphed. We win. We know how to win, right?

THE PRESIDENT: And we win because of the spirit of our people. Believe me, that’s a big part of it.

THE PRESIDENT: Because you have what it takes to be the leaders that will shape this future. Some of you may want to come back to the capital — someday, you’re going to be back, many of you — and help make the laws that will guide this nation and govern our land.

Being successful is about finding your purpose in life and never ever giving up. Do you ever give up? No. Does anybody here give up?

THE PRESIDENT: What about here?

A PARTICIPANT: Yes, sir, they mean it.

THE PRESIDENT: You were chosen for this program because you believe in America’s future and because you have the ambition and the heart to ensure that America will always be victorious and will always prevail.

Through Boys and Girls Nation, you are learning the values that are necessary for a nation to endure and for a nation to thrive — pride in our history, loyalty to our citizens, and allegiance to our great American flag.

In the decades to come you will help our nation reach new heights — we’ll be so proud of you — discover new frontiers, and strengthen the bonds of loyalty between our country and its people.

It is my honor to meet with you all today, and it was my greater honor to come out here early before the press got here to take all of those pictures that we took, and I hope they send you the right pictures. (Laughter and applause.) And they will.

As I look out at the audience, I see the next generation of American leaders. I see the promise of our future. I see the strength and love of the American spirit. And because of young people like you, I am more confident than ever in the future of the United States.

Together, we will make America greater than ever before. I mean that. We’re going to make America greater than ever before, and we’re on our way. You see what’s going on. We’re building up military. We’re getting great job numbers — best in 17 years. Best job numbers in 17 years. The enthusiasm for manufacturers and business is at just about the highest point since they started taking those tests.

So I just want to tell you: Go out there. Go get them. I have no doubt you’re going to — every one of you — be successful.

Never quit. Never give up. Always do what you love. Take great care of your family and your parents because we love your parents. You probably wouldn’t be here without your parents, right? (Laughter and applause.)

So thank you again to the American Legion, and congratulations to you all. God bless you, and God bless America. And thank you for being at the White House. 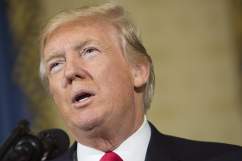