With more rumors of ISIS leader al-Baghdadi's death, I decided to see if @CJTFOIR had any indications. This response made me LOL. pic.twitter.com/wb7lFu4EFD

The Islamic State has allegedly confirmed the death of its leader, Abu Bakr al-Baghdadi, according to reports. United States Central Command has not confirmed it, but has given a cheeky response. After reporter Chad Garland inquired with CENTCOM’s press office about the rumor about Baghdadi’s death, CENTCOM responded, “We strongly advise ISIS to implement a long line of succession.”

Rumors of Baghdadi’s various “deaths” have circulated for years, but the latest comes from an unnamed source with Al Sumaria TV, who said the Baghdadi died in the Iraqi province of Nineveh.

The Syrian Observatory For Human Rights has also “confirmed the information.”

ISIS has allegedly announced plans to announce a new leader, but the ISIS-linked Amaq News has not released any statement on the issue.

Late last month, images alleged to be of the dead leader circulated online, released by an Iranian media outlet. However, the images were traced to those already circulating online in 2014 video below when the reports about another death of Baghdadi proved to be untrue.

In May, Russia claimed to have killed Baghdadi in an airstrike in Raqqa, Syria.

In January, the Popular Mobilization Forces intelligence claimed that Baghdadi may have been killed or injured in an airstrike west of Mosul, Iraq. This was proven false. 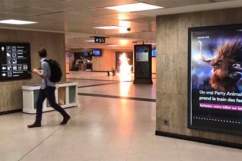 Read More
Iraq, Terrorism
The Islamic State has allegedly confirmed the death of its leader, Abu Bakr al-Baghdadi, according to reports. United States Central Command has not confirmed it, but has given a cheeky response.