A Heavy video contributor was attacked by protesters while recording the G20 “Welcome to Hell” demonstration Thursday in Hamburg, Germany.

Journalist Marcus DiPaola was recording video when he was attacked by a group of men. You can watch his video of the incident above.

“I was confused. The right side of my face hurt,” DiPaola said after covering the protests in downtown Hamburg. “I was kneeling on the ground and a guy said he’d piss on me, then kicked me out of my kneeling position and on to my side.”

One man in particular, seen in a blue shirt in the video, kept calling DiPaola a Nazi, and continued to harass him while others in the crowd decided to step in and push the man away. DiPaola was already on the ground when others joined the man in the blue shirt and continued to hit him.

DiPaola left the scene with scrapes and a few bruises.

The G20 Summit, hosted by German Chancellor Angela Merkel, is making climate change and migration some of the main subjects of the event, and causing tensions to rise all over the city and the world. Leaders of the world’s top 20 emerging economies are gathered, including President Donald Trump, Russian President Vladimir Putin, and Chinese President Xi Jinping.

The G20 group accounts for 85 percent of the world’s GDP and two-thirds of it’s population. Most G20 business takes place in informal meetings, and 17 years ago when the summit started only finance ministers and central bank governors were in attendance. Now politicians from around the globe will hold meetings to decide who will be the next global economic leader.

GettyDemonstrators gather at Hamburg harbor prior to the ‘Welcome to Hell’ anti-G20 protest march on July 6, 2017 in Hamburg, Germany.

The “Welcome to Hell” protests are expected to draw about 100,000 people by Saturday, the second day of the summit, including a group of about 8,000 who police believed were a threat to cause violence, Reuters reported. More than 20,000 German police officers in riot gear were expected at the Thursday demonstrations, authorities said.

You can watch some of the other footage recorded by DiPaola at the link below: 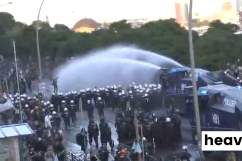