Hurricane Harvey, now downgraded to a tropical storm, has already left a path of destruction in its wake. Buildings were leveled in Rockport and other regions are still faced with life-threatening flooding.

Here are photos and videos showing the sheer strength of Harvey.

In Corpus Christi, waves pound the shore as Hurricane Harvey approached on Friday:

Before Harvey’s arrival, a man in Corpus Christi got hit by an unexpected high wave.

A poor, windblown seagull looks for food as he fights the rain and winds of Hurricane Harvey.

In Corpus Christi, a street light is knocked off its base by hurricane winds.

In Corpus, a street light falls onto the ground after being blown over by Harvey.

A car is partially submerged from high rains that came when Harvey hit Corpus Christi.

When Hurricane Harvey hit Corpus Christi, cars and a house caught on fire. The remains can be seen below.

In Rockport, Donna Raney makes here way out of the wreckage of her home, after Harvey destroyed it. Donna was hiding in the shower after the roof blew off and the walls of her home caved in.

Daisy Graham reacts to the news that a friend of hers might be trapped in an apartment complex that was destroyed by Hurricane Harvey. The friend was later found alive, hiding in a shower stall.

Jacque McKay walks through an apartment complex partially destroyed by Harvey in Rockport. She was able to rescue her dog but lost almost everything else.

In Rockport, a firefighter goes door-to-door on a search and rescuemission.

A damaged home is seen after Hurricane Harvey passed through.

Jaque McKay walks through her apartment complex, which was partially destroyed by Harvey. She was able to rescue her dog.

Valerie Brown walks through a flooded area after leaving her apartment in Rockport.

A car lies abandoned after heavy damage from Hurricane Harvey in Rockport.

Harvey demolished part of a hangar in Rockport. A light plane lies in ruins.

Homes were destroyed as Harvey passed through Rockport.

Vehicles lie decimated after a building was destroyed by Harvey in Rockport.

Harvey demolished part of a hangar in Rockport. A light plane lies in ruins.

Water drains from a flooded street in Galveston after Harvey passed through.

Residents in Galveston walk along flooded streets that reached their calves.

Vehicles drive through flooded streets in Galveston after Harvey.

A passerby tries to pick up a fallen McDonald’s logo, left behind by Hurricane Harvey. 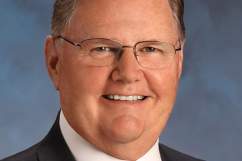 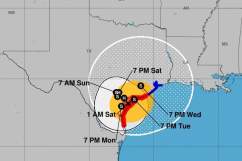