Getty Melania Trump released a statement on the op ed.

Melania Trump will be heading to Canada to attend the Invictus Games in Toronto next month, and some people are already criticizing the First Lady’s upcoming trip. Mrs. Trump’s anticipated presence at the event has been called an “insult” to disabled veterans by Brad Fraser at Torontoist.

For those unfamiliar with the Invictus Games, it is an international Paralympic-style event in which disabled, wounded, injured, or sick military service members and veterans compete in different sporting competitions. The event was created by Prince Harry in 2014 and was first held at at London’s Copper Box arena.

“Melania Trump coming to Canada as an emissary of the Invictus Games is exactly the kind of hypocrisy we don’t need in Canada—or anywhere—at any time,” Fraser wrote in a recent article for Torontoist.

The premise of Fraser’s remarks stems from President Trump’s previous mocking of a disabled reporter. The incident took place on the campaign trail back in 2015. The ensuing uproar marked one of the low points of the Trump campaign, evidenced by its echoes in the months that followed — and even now, two years later.

“For the 100th time, I never ‘mocked’ a disabled reporter (would never do that) but simply showed him … ‘groveling’ when he totally changed a 16 year old story that he had written in order to make me look bad. Just more very dishonest media,” President Trump tweeted in January.

In addition to Fraser’s post, many other Canadians have voiced their concerns about the First Lady’s first solo trip. The Toronto Star published a reader letter that insisted Mrs. Trump’s presence would “tarnish” the Games.

“Not only will the games be tarnished by her presence, but her trip may undo much of the goodwill our government has actively pursued to get a fair trade deal for Canada,” wrote Jayne Rees of Uxbridge.

The 2017 Invictus Games will be held in Toronto on September 23 through September 30. They will be held at the Air Canada Centre. There are currently 550 enrolled competitors for the 12 adaptive sporting events. 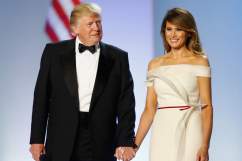 Loading more stories
wpDiscuz
1
0
Would love your thoughts, please comment.x
()
x
| Reply
Melania Trump's upcoming visit to the Invictus Games is being slammed by various people in Canada -- and around the world.