Getty A woman buys wine across from the empty water shelf in a supermarket in Riverview, Florida on September 9, 2017.

Hurricane Irma has already cut power to nearly 25,000 people and Florida Gov. Rick Scott warned that those ordered to evacuate must “leave now.”

“The storm is here. Hurricane Irma is now impacting our state,” he said at a news conference. “If you’ve been ordered to evacuate, you need to leave now…not tonight, not in an hour, you need to go right now.”

The outer bands of the storm has began to affect the Florida Keys as of Saturday, as well as create a strong surf in Miami.

The governor warned those in evacuation areas should leave the state “right this minute.”

“It’s going to be very difficult to survive this if you’re in the Keys,” he said during an interview with The Weather Channel on Saturday morning. “I’m begging you to get out.”

As residents of the “sunshine state” departed, officials in Miami were taking no chances with the homeless population either, the Associated Press reported.

According to the Associated Press, the estimated 1,100 homeless people in Miami were directed to enter storm shelters, and were warned that they would be detained and receive a mental health evaluation if they refused.

“We’re going out and every single homeless person who is unwilling to come off the street, we are likely going to involuntarily Baker Act them,” Ron Book, chairman of the Miami-Dade Homeless Trust, told the AP.

Hurricane Irma weakened slightly to a Category 4 storm early on Saturday, according to the US National Hurricane Center, after making landfall hours earlier in Cuba with maximum-strength Category 5 winds. 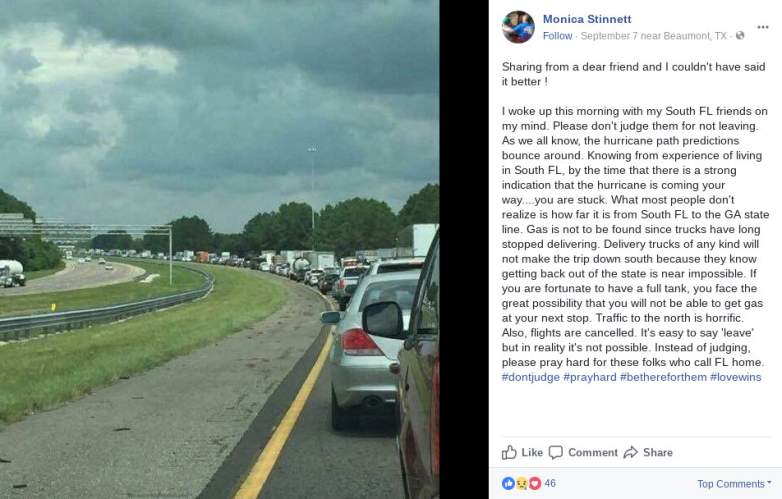 It isn’t an easy trek for Floridians to evacuate. (Facebook/monica.stinnett)

For some who want to leave, the trek seems dire, scary and nearly hopeless. “…I woke up this morning with my South FL friends on my mind,” Monica Stinnett posted to Facebook. “Please don’t judge them for not leaving.” She continued:

As we all know, the hurricane path predictions bounce around. Knowing from experience of living in South FL, by the time that there is a strong indication that the hurricane is coming your way….you are stuck. What most people don’t realize is how far it is from South FL to the GA state line. Gas is not to be found since trucks have long stopped delivering. Delivery trucks of any kind will not make the trip down south because they know getting back out of the state is near impossible. If you are fortunate to have a full tank, you face the great possibility that you will not be able to get gas at your next stop. Traffic to the north is horrific. Also, flights are cancelled. It’s easy to say ‘leave’ but in reality it’s not possible. Instead of judging, please pray hard for these folks who call FL home.

Gov. Rick Scott tweeted that help is available for those who are not able to get out due to traffic. “If you are in an evacuation zone & do not have a way to evacuate due to traffic- call 1-800-342-3557,” he stated. “We will do all we can to get you out.”

Loading more stories
wpDiscuz
0
0
Would love your thoughts, please comment.x
()
x
| Reply
Governor Rick Scott warned Floridians in evacuation zones on Saturday that they should "leave now." However there are major roadblocks for those who wish to leave.