A Salt Lake City police detective is under fire after surveillane and bodycam video was released of him forcibly arresting a nurse at a hospital after she refused to draw blood from an unconscious patient.

The video, which was released by nurse Alex Wubbels and her attorney August 31, has gone viral and shows Detective Jeff Payne getting into an altercation with Wubbels inside of University Hospital on July 26.

Frantic screams from Wubbels are audible throughout the video as Payne attempts place her under arrest with her refusal.

“You’re assaulting me!” Wubbels screams as she’s put into handcuffs inside of the hospital.

Wubbels claims she was assaulted and illegally arrested by Payne after he requested a blood sample from a truck driver who was involved in a collision in northern Utah. The crash left another motorist that was fleeing police dead, The Salt Lake Tribune reported, and the truck driver was severely burned after the incident and left unconscious.

Payne said he wanted a blood sample from the driver to see if he was under the influence of any substance when the fiery crash occurred, and Wubbels refused to do so because of an agreement with the hospital. She said blood can’t be drawn from a patient that’s unconscious unless the person in question is under arrest.

“This was something that you guys agreed to with this hospital,” Wubbels said, citing a policy that blood isn’t able to be taken without consent, a warrant or unless the patient is under arrest.

At one point during the video, Wubbels is on the phone with her boss and asks Payne once more if the patient it under arrest. Payne says “no” to the inquiry, and continuously insists he has the authority for the blood to be drawn. When Wubbels refuses to draw the blood again, the male on the phone can be heard saying to Payne, “You’re making a huge mistake.”

At that point, Payne reaches toward Wubbels and threatens her for “interfering with a criminal case,” threatening to send her to jail if she doesn’t draw the blood.

“I either go away with blood in vials or body in tow,” Payne says in the video.

Payne pulls Wubbels outside of the hospital to handcuff her as she screams that she’s done nothing wrong.

“This is crazy,” a visibly upset Wubbels screams. “Why is he so angry?”

As Wubbels is being taken into the squad car, she screams that Payne is “hurting” her.

“Then walk,” the detective screams before placing her into the front seat of his squad car.

Wubbels said she was detained by officers in the car for about 20 minutes before being released.

Wubbels appeared at an August 31 press conference alongside her attorney and said she wants people to see what happened so it doesn’t happen again.

“The only job I has a nurse is to keep my patients safe,” Wubbels said. “A blood draw gets thrown around like it’s some simple thing, but blood is your blood. That’s your property.” 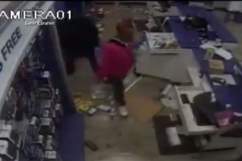 WATCH: Looters in Houston Steal From Stores During Floods

Loading more stories
wpDiscuz
6
0
Would love your thoughts, please comment.x
()
x
| Reply
Alex Wubbels, a nurse in Salt Lake City, was arrested for refusing to draw blood from an unconscious patient. Watch the dramatic video of her arrest.