A new video has surfaced showing actress Gwyneth Paltrow talking about her relationship with media mogul Harvey Weinstein on David Letterman on November 25, 1998. In the interview, Paltrow tells Letterman about Weinstein, “Oh, he’ll coerce you to do a thing or two, haha.”

The topic about coercion comes up with Letterman jokingly alleging that Weinstein was a “mob guy” who was doing so well in the movies because of “coercion.”

Paltrow’s answer takes on a whole new meaning given the latest revelations and comes after the release of a slew of videos showing subtle, Hollywood jabs at the “open secret” about Weinstein’s alleged predatory ways.

One of the videos shows Seth MacFarlane, creator of Family Guy, calling out Weinstein in 2013, at an Oscars nominee reveal with Emma Stone.

The other was a subtle joke made on 30 Rock by Jenna Maroney, played by Jane Krakowski.

The latest Paltrow video comes after she revealed that Weinstein came onto her when she was a burgeoning, 22-year-old actress during a meeting about Weinstein’s Emma at his suite at the Peninsula Beverly Hills, reports The New York Times.

Paltrow was told to keep quiet. 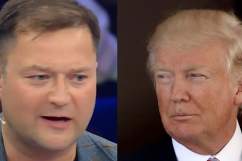