Meghan McCain is married! Just a few weeks after an insider revealed the news to Us Weekly, saying that McCain and her fiance are “well into wedding planning,” McCain and her man, Ben Domenech, tied the knot. According to People Magazine, the two exchanged vows at the McCain family’s ranch in Sedona, Arizona, on November 21.

“Meghan McCain and Ben Domenech were married today at the McCain family lodge in Sedona, Arizona. The bride’s father, Senator John McCain, gave her away and they were married by John Dickerson. Following the ceremony, McCain and Domenech celebrated with dinner and dancing surrounded by their family and close friends,” a rep told the outlet.

There seems to be an increased interest in McCain’s personal life since she joined The View this month. She made her official debut on October 9, talking about her dad’s recent brain cancer diagnosis publicly for the first time. McCain, 33, did not make mention of the other guy in her life, however.

1. McCain Has Made Mention of Her ‘Boyfriend’ on Social Media & He Loves to Cook

Watch #TheFederalist publisher #BenDomenech and the panel discuss radical Islam on the season finale of #RealTimeHBO. Now available on #HBOGO and #HBONOW. #RealTalk

Previously, McCain hadn’t revealed much about the man she is dating — not even his name — but on November 1, Page Six spilled the details: McCain’s “bae” is 35-year-old Ben Domenech, writer of The Transom. According to the site, Domenech “is a former speechwriter [and] also co-founded the RedState conservative blog.” On November 1, Domenech confirmed Page Six’s report by retweeting the article and giving a shoutout to McCain, writing “Love you bae.”

The ultra-private daughter of John and Cindy McCain has given away a few hints about her man, but has been very careful when it comes to being spotted out in public with him.

Although she has not shared any photos with her guy, she has made mention of “my boyfriend” on several occasions and has given him a lot of credit for being a great cook.

McCain has shared quite a few Instagram photos of food that Domenech has prepared for her. Lately, he has been perfecting the art of brunch, but has also made McCain quite a few photo-worthy dinners.

You can see some of McCain’s posts about her boyfriend’s cooking skills in the photos below.

Boyfriend made a salmon dinner! ???

Jet lagged and worn out from 16 hours of travel and my boyfriend still is able to cook my favorites in this NYC blizzard! ❤❄️??

In November 2016, McCain posted the following tweet about watching Home Alone with her man.

My boyfriend & I are watching Home Alone and are in agreement Kevin did nothing wrong in the beginning, he was just mad a jerk ate his pizza

Other than that, however, McCain has stayed mum on her personal life. She hasn’t done any interviews in which she talks about Domenech in depth, nor has she made it a point to make mention of him on The View.

2. McCain Enjoyed a Vacation in Greece this Summer & Fans Think She Went with Domenech

McCain enjoyed a once-in-a-lifetime kind of vacation in Greece this summer, visiting the islands and having some serious fun in the sun. Although McCain did not write about being on vacation with her one and only, fans were quick to pick up on the major detail, especially once McCain shared the above photo that showed her shoes next to a pair of men’s shoes.

“Awww I think love is in the air when you take his and hers shoe pictures. It’s the little things in life,” wrote one Instagram user.

And this is not the first romantic getaway that McCain has taken with Domenech. For New Year’s last year, McCain spent time in Bora Bora with her special someone. She posted a few photos of the trip on her Instagram account, but the only proof of a boy was a photo of his hand around a champagne glass, which you can check out below.

The two enjoyed some various water activities, such as snorkeling, and even got to see some sharks while ringing in the New Year.

3. McCain Previously Said She’s ‘Not Ready to Settle Down’ & She Has Never Taken a Relationship Public

Thank you for having me Pittsburgh and #Thrival Festival. Enjoyed speaking on the panel with Eugene Robinson and Council woman Maritta Garrett!

A few years ago, McCain made it clear that she wasn’t ready to settle down. She was happily single and focused on her career. At that time in her life, McCain said that she wasn’t even sure if she wanted to do the whole marriage-and-kids thing.

“I am 30. I am still dating and love my job and not ready to settle down at all. I spend a lot of time dancing in gay bars and want my gay friends to be able to get married, but I don’t know if I ever want to get married and have kids. And I think that’s a common struggle,” McCain told the Los Angeles Times back in 2015.

In 2012, she shared a similar outlook on her future. Getting candid with Playboy Magazine, McCain opened up about her personal life and admitted to being “a bit of a commitment-phobe.”

“I can do whatever the hell I want all the time. I have no one to check in with. When you’re in a serious relationship, you kind of have to check in before you go out with your friends or do whatever. I think I’m a bit of a commitment-phobe. Or maybe it’s just that I haven’t met the right guy. Dating’s okay, but guys can be weird. They think if they Google you and talk about stuff you’ve said, they get to make out with you at the end of the first date,” McCain told the publication, according to Us Weekly. McCain’s full interview with Playboy is no longer available on their website.

4. McCain Previously Said That ‘Dating Is a Battle’ & Shared the 1 Thing She Looks for in a Guy

McCain previously admitted that dating isn’t easy — and that could be the reason that she stayed single into her 30s (and perhaps it’s one of the reasons why she isn’t married).

“I think dating is a battle. Dating is war. It’s all about game-playing: texting at the right time, saying the right thing. My whole entire life is built on the fact that I am incapable of bullsh*t and bullsh*tting anyone. I mean what I say, and I say what I mean and I’m not gonna jerk anybody around in any capacity of my life: friendships, relationships, work, politics. I am never gonna bullsh*t anybody, and that doesn’t bode well for dating. So for me, I haven’t had great dating experiences, but one expert we talked to said ‘Romance isn’t dead; it’s just dormant’ and I think that’s probably a better way to put it,” McCain told Glamour in 2013.

When it comes to what McCain really looks for in a guy, she is very clear about one thing in particular: She wants to be with someone who has a great sense of humor.

“If he can make me laugh, I don’t care if he looks like Zach Galifianakis; it’s an instant turn-on,” McCain told Playboy, according to Entertainment Weekly. Based on this information, it’s safe to assume that McCain’s boyfriend keeps her laughing.

5. McCain Is Not a Lesbian Despite Rumors to the Contrary

Since McCain has chosen to keep her relationship out of the tabloids and away from the mainstream media, her name has circulated around the gay rumor mill over the years. It seems as though her not having a boyfriend — or wanting one — made some people question her sexuality. When you couple that with her being friends with Rachel Maddow and Tila Tequila (and you take it one step further and pay too much attention to McCain saying that she hangs out at gay bars), you don’t have to wait long for the lesbian chatter to begin.

However, McCain told Playboy that she loves men — and having sex with them.

“Honey, you’re nobody unless you have a gay rumor about you. I’ve been hit on by women from time to time, and it might simplify my life if I were gay, but no. Rachel and Tila are just great people. … I’d be the first person to tell the world I was gay. I’m not private about anything. I think you should live how you should live. But I’m strictly d—ly. I can’t help it. I love sex and I love men,” McCain told Playboy, according to Entertainment Weekly. 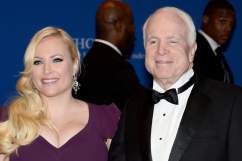 Loading more stories
wpDiscuz
0
0
Would love your thoughts, please comment.x
()
x
| Reply
Meghan McCain has a boyfriend but has managed to keep him out of the public eye. She has talked about him on social media and vacationed with him this summer.