A train transporting several members of Congress and their families was on its way to the 2018 GOP retreat when it hit a truck on Wednesday, January 31, around 11:30 a.m. Eastern.

The train was traveling through Albemarle County, Virginia, on its way to West Virginia, when it collided with a garbage truck that appeared to be stuck on the tracks.

“We are on our way to our annual GOP retreat, the train carrying members and spouses hit something. Laina and I are ok, I am helping those that are injured, I will have Laina keep you updated as I know more,” Congressman Roger Marshall tweeted.

Marshall’s wife then tweeted from his account, “The train hit a garbage truck, they’re asking for doctors on the trains to help. Right now Dr. Marshall is helping people who are injured.”

1. At Least 5 People Have Been Injured & 1 Person Has Died According to Senator Jeff Flake

Emergency crews have worked to clear all of the cars and have confirmed five injuries thus far.

According to Sen. Jeff Flake, one person has died. That person was believed to be riding in the truck. Additionally, two others in the truck were injured. The extent of their injuries is unknown at this time.

According to Fox News, some train passengers were “thrown from their seats.” People on the train suffered minor “bumps and bruises.”

Rep. Jason Lewis was transported to a nearby hospital for a potential concussion.

“I’m fine compared to tragically the truck driver and thankful for our first responders,” the Minnesota Congressman told CNN by phone.

Amtrak has released a statement claiming that there weren’t any injuries on board the train.

“An Amtrak train came into contact with a vehicle that was on the tracks at 11:20 a.m. in Crozet, Virginia. There are no reported injuries to passengers or crew members. Local law enforcement is investigating the incident and crews are inspecting equipment for damage. The train originated in Washington, D.C. Updates will be provided as new information becomes available,” Amtrak spokesperson Beth Toll said in a statement.

However, Congressman Marshall’s wife, Laina, tweeted that her husband, who is a doctor, performed CPR on the train’s conductor. Laina Marshall also said that her husband assisted two people who had been riding in the garbage truck. She added that those two people were transported to the hospital via ambulance and were “injured badly.”

The University of Virginia Health System has confirmed that three patients are being treated there and that the hospital is expecting two more patients.

“At this time, after the train crash in Crozet, three patients have been transported to UVA Medical Center, and two additional patients are being transported here. One patient is in critical condition; the remaining patients are still being evaluated,” UVA Health System tweeted.

2. There Were 380 People on Board, Including House Speaker Paul Ryan

We're fine, but our train hit a garbage truck. Members with medical training are assisting the drivers of the truck. pic.twitter.com/0I9jOwHTmb

The train was carrying 380 people in its 10 cars, according to the police scanner.

Several members of congress were on the train, including House Speaker Paul Ryan, who is “okay,” according to CNN. Vice President Mike Pence was not on the train.

“We’re fine, but our train hit a garbage truck. Members with medical training are assisting the drivers of the truck,” tweeted Rep. Greg Walden.

“Well, it certainly shocked everybody on the train. It was a pretty hard collision. Really thankful that the train was able to stay on the tracks, came to a halt within, it looks like, maybe about a quarter mile or so. I’m happy that I don’t have whiplash. Once the adrenaline goes down, there might be some people who are feeling an ache or a pain they didn’t feel as soon as the accident happened,” GOP Rep. Lee Zeldin told CNN by phone.

3. President Donald Trump Has Been Informed of the Accident

President Trump has been briefed on the accident and was meeting with his security team shortly after the accident occurred.

“The President has been fully briefed on the situation in Virginia and is receiving regular updates. There is one confirmed fatality and one serious injury,” White House press secretary Sarah Sanders said.

“There are no serious injuries among members of Congress or their staff. Senior Administration officials are in regular contact with Amtrak and state and local authorities. Our thoughts and prayers are with everyone that has been affected by this incident,” Sanders added.

4. The GOP Retreat Will Continue as Scheduled

According to CNN, the GOP retreat, which will take place Wednesday through Friday, has not been cancelled.

“After discussions with leadership in the House and Senate and the Congressional Institute, we will return to Charlottesville and proceed via bus caravan to West Virginia,” an unnamed congressman told the outlet.

On Wednesday night, a two-hour dinner with Vice President Mike Pence was scheduled. On Thursday, there is supposed to be a two-hour lunch with President Trump, according to Politico.

Politico also outlined some additional plans that the Congressman will take part in over the next 72 hours.

“GOP lawmakers will also hear about Republicans’ ‘Big Vision’ for 2018 from Senate Majority Leader Mitch McConnell (R-Ky.) and House Speaker Paul Ryan (R-Wis.) on Wednesday afternoon, as well as receive a briefing from pollster David Winston and House Majority Leader Kevin McCarthy (R-Calif.) on how to sell the new tax law during the midterm campaigns. On Thursday, Republicans will hold a working breakfast with Secretary of State Rex Tillerson and Secretary of Defense James Mattis, then pivot to a joint session on infrastructure with committee leaders, Transportation Secretary Elaine Chao and top Trump economic adviser Gary Cohn. Other sessions will focus on workforce development and government reform before a reception and dinner on Thursday with U.S. Ambassador to the United Nations Nikki Haley.”

5. Some Social Media Users Have Been Posting Jokes & Memes Following the Crash

NOW: Amtrak train collides with garbage truck in Crozet. Nurse on scene reports at least one fatality and at least one in critical condition. NBC29 is on scene and will bring you more details as we get them. pic.twitter.com/eU0uYL0JQx

Quite a few social media users have been posting jokes and memes about the crash, using the “Trump train” as the punch line. Some have even called this crash a “metaphor.”

Daily Beast writer and frequent MSNBC guest Sam Stein was one of those people. He tweeted — and then deleted — a comment about the crash.

“Cmon. Did they stage this metaphor?” Stein tweeted in response to the news of the train crash. You can see his post below.

When asked about his comment, Stein said, “I erased it a while ago because I thought more about it and thought it was insensitive.”

“A train carrying Republican members of Congress hits a truck near Charlottesville. Or is this a metaphor for American politics today?” Boykin wrote. His post also appears to have been deleted. 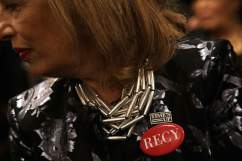 Who Is Recy Taylor & What Do the Red State of the Union Pins Mean?