Nick Foles’ wife, Tori Foles, is sick with a dual diagnosis of Postural Orthostatic Tachycardia Syndrome and Lyme disease. What are these illnesses and what problems do they cause the spouse of the Jaguars’ quarterback?

Tori Foles wrote a lengthy blog post about the ailments for a site called The Increase Women. Although she described some of the challenges caused by the health problems, she also credited them with reinforcing her family’s faith. Tori, and the couple’s only daughter, Lily, who was born in June 2017, were captured on camera at Super Bowl 2018 cheering Nick Foles on.

In May 2019, concerns were raised about Foles’ family when it was revealed he would miss the Jacksonville Jaguars’ offseason program “indefinitely after the team excused him for personal reasons,” according to Philly Voice. Our thoughts and prayers are with Nick and his family,” said Jaguars’ HC Doug Marrone.

It later turned out that Tori Foles had gone into labor and miscarried the couple’s second child, a boy.

From Nick Foles’ wife Tori on Instagram a short while ago. Heartbreaking. He’ll be back with the #Jaguars soon. It’s clear he had to take care of his family the past few days. Wish the Foles family nothing but the best. https://t.co/bwg6j0rQ9W pic.twitter.com/eASkcRcH7d

After the Eagles won, Nick Foles held Lily in his arms as he addressed the crowd.

“My life was altered in 2013 when I was diagnosed with an unexpected illness. A year after working at Nike Inc. and living an active lifestyle in Portland, OR, everything changed. I suddenly became ill and had no idea why. I was diagnosed with Postural Orthostatic Tachycardia Syndrome (POTS),” Tori wrote. “Eventually, this would lead to an underlying diagnosis of Lyme Disease.” Tori described the illness as something that brought her and husband, Nick, closer to God. Nick Foles has been very open about his faith, even saying that he hopes to become a pastor after leaving the NFL.

Cool to see Nick Foles wife & daughter at the game after their journey https://t.co/oY9wT7GG35 pic.twitter.com/6fE1adIZVS

According to the Gwinnett Daily Post, Tori and Nick “were married during a time Tori was undergoing tests at Mayo Clinic in Rochester, Minn., which is around the time Foles felt his focus and priorities shift from football. In 2013, Tori was diagnosed with Postural Orthostatic Tachycardia Syndrome (POTS) and later diagnosed with Lyme disease. Her heart rate could raise 30 beats per minute just from sitting and standing.”

GettyTori and Nick Foles have been outspoken about the importance of their faith.

Nick Foles wears his faith on his sleeve. “I want to be a pastor in a high school,” Foles said shortly before Super Bowl 2018 commenced, according to Fox Sports. “It’s on my heart. I took a leap of faith last year and signed up to take classes at seminary. I wanted to continue to learn and challenge my faith. It’s a challenge because you are writing papers that are biblically correct. You want to impact people’s hearts.”

Postural Orthostatis Tachycardia Syndrome, often called POTS, is “a malfunction of the patient’s autonomic nervous system” that affects patients differently. “Some patients have fairly mild symptoms and can continue with normal work, school, social and recreational activities. For others, symptoms may be so severe that normal life activities, such as bathing, housework, eating, sitting upright, walking or standing can be significantly limited,” reports Dysautonomia International.

According to the Centers for Disease Control and Prevention, “Lyme disease is caused by the bacterium Borrelia burgdorferi and is transmitted to humans through the bite of infected blacklegged ticks. Typical symptoms include fever, headache, fatigue, and a characteristic skin rash called erythema migrans.”

Tori filled the blog post with statements of faith. “For me, this illness has been a journey of faith, hope, and trust in the process that God has set out for me. Through my writing and my blog, I hope to be able to give some perspective on how to view difficult situations and help inspire people to find purpose in what they are going through. Most of all, I hope to lead people closer to the source of my hope and strength, Jesus Christ,” she wrote.

She had a separate blog that was devoted to her journey with the illnesses, but it is no longer active. Nick Foles, 29, was born and raised in Austin, Texas. He and Tori met at Arizona, where he was a quarterback for the football team after transferring there from Michigan State, and she played on the volleyball team. They started out as friends, but their relationship blossomed into a romance.

Tori and Nick married in 2014. In June 2017, Tori gave birth to the couple’s first child, Lily James Foles. Nick grew emotional when speaking about his wife and daughter before Super Bowl 2018. “That’s the most important thing,” Foles said. “When I think about this journey and everything, I get home and I, uh … I get to see her. I get to see my wife. I see her and my wife, just in her face and in her mannerisms, that’s what it’s about. I know that every time I step on the field, every single thing I do, there’s going to be some days she looks and wants to know who her daddy was and what he did.”

You can watch the emotional moment here:

Nick Foles tears up when talking about playing well for his daughter and setting an example pic.twitter.com/4ctCQj2FsK

In one cute moment, Lily tried to grab the microphone after her dad was speaking following his big victory. 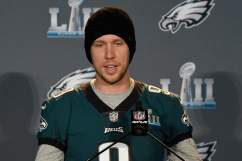 Nick Foles’ Religion: The Eagles’ QB Wants to Be Pastor