The student killed after being shot Wednesday at Huffman High School in Birmingham, Alabama, has been identified as 17-year-old Courtlin Arrington, Al.com reported.

Arrington, along with a 17-year-old boy who was critically injured, were the victims of an apparently accidental shooting at the school.

1. Arrington Died While En Route to a Hospital & Metal Detectors Weren’t in Use That Day

According to Al.com, Arrington died while being transported to a hospital after she was unable to be saved via CPR.

The 17-year-old boy was shot in the leg but later released from the hospital, the publication reported. He was later questioned by authorities at police headquarters. The boy was a junior and played on the school’s football team.

Birmingham City Schools Superintendent Lisa Herring said at a press conference Thursday that the school had metal detectors, but they were not in use the day of the shooting. Herring went on to say that the district will examine their procedures after Arrington lost her life.

Birmingham City Schools Superintendent Dr. Lisa Herring confirms although Huffman High School has metal detectors, they were not in use Wednesday when a 17 year old student was shot and killed inside a classroom. pic.twitter.com/kdAug7rNWy

“We have lost one of our brightest and best scholars,” Herring stated at the conference, adding that a “person of interest” was in custody.

2. She Was an Aspiring Nurse & Was Geared Up to Graduate in May

Arrington was set to graduate from the school in May, and had already been accepted into a college to follow her dreams of becoming a nurse.

“We’re not just talking about some person, we’re talking about losing a part of our future,” said Birmingham Mayor Randall Woodfin, according to Al.com. “Our hearts are heavy.”

Arrington’s Facebook account, where she went by the name of “Courtlin La’shawn,” showed a happy teen who enjoyed posting selfies and Snapchat photos.

A day before she would die, the beauty shared a chilling post that read, “Thank u god in advance for what’s about to happen ???.”

Arrington talked about attending the school’s upcoming prom in another heartbreaking post:

Loved ones took to Facebook to express their sadness over the teen’s passing.

Mya Lá Shunn wrote: “I can’t believe this my court dawg they took you away nobody kno the pain and hurt behind this fr she was the hype man Stayed smiling i love you so much Courtlin La’shawn ??just hml one last time tell me some good ??? every memory we shared will be cherished ?it don’t even feel ight saying rip Long live Court foreverrrr? ?.”

“it’s so sad how our parents can’t even send us to school in the morning & know we are coming back home that afternoon,” Ka Ron captioned the above video featuring Arrington. “this is so sad it’s heart breaking ? #RIP Courtlin La’shawn ? I’m praying for your family ,your friends & our graduating class you will be missed #C/O18❤️??‍???‍?”

5. Students Hid Under Desks After the Gunfire Erupted

A photo obtained by WBRC-TV shows students hiding under desks during the incident. A mother whose daughter is in the school said she was waiting outside to pick her up and her daughter texted her to say, “Mom we’re on lockdown,” according to Al.com.

The mother said she heard the victims are a male and a female, but police have not confirmed that. “I was just hoping my baby was OK, that everybody was OK,” the mother told the newspaper. “I was nervous. This is so sad.”

A student told WVTM-TV, “I heard the shot and it’s more like, ‘I gotta fear for myself now.’ And I need to get out of the school. That basically what went through my head and to make sure that my friends that they alright. 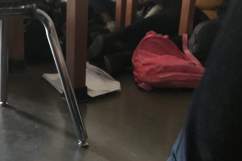 Read More
5 Fast Facts, Alabama, Breaking News, school shooting
Courtlin Arrington has been identified as the student killed after an apparent accidental shooting that took place at Huffman HIgh School in Alabama. Read more about the beautiful aspiring nurse who was set to graduate high school in May here.