March for Our Lives happened today, with hundreds of thousands of people participating all around the country and the world. More the 800 sister rallies took place just across the United States, and at least 500,000 people are attending the main rally in Washington, D.C. But who is funding these huge events? And how were they organized so quickly across the country? Read on for more details.

Celebrity & Entrepreneur Donations Funded Much of March for Our Lives

Much of the March for Our Lives event is being funded by donations. Celebrities like George and Amal Clooney, Steven Spielberg, Kate Capshaw, Jeffrey Katzenberg, and Oprah Winfrey all pledged to donate $500,000 each to the rally. John Legend and Chrissy Teigen donated $25,000. More celebrities may have donated less publicly, since many were tweeting about the event and talking about it on social media. Even the dating app Bumble donated $100,000 to the cause. Those donations can really add up and help with a lot of costs associated with the massive D.C. rally.

It’s not just celebrities who donated. Philanthropist and businessman Eli Broad pledged $1 million to the cause, Deadline reported. In a statement he said, “This must stop. I’m personally donating $1 million to Everytown and joining the courageous students of Parkland and millions of Americans demanding commonsense solutions to end the gun violence crisis.” Eli Broad, 84, is described as the only person to ever build two Fortune 500 companies in separate industries. In October, he announced that he was stepping down from public life. He made most of his money in homebuilding through his Kafuman and Broad Home Corporation (KB Home). He was the first homebuilder listed on the NYSE. He stepped down as CEO in 1974. He also earned money from buying Sun Life Insurance in 1971 and transforming it into a retirement savings company called SunAmerica, which he sold to the American International Group in 1999 for $18 billion.

Board members for March for Our Lives help determine how to use the funds. According to The Huffington Post, these board members include “George Kieffer, chair of the Board of Regents of the University of California; Jeri Rhodes, who is with the Friends Committee on National Legislation, a Washington-based lobbying group founded by Quakers; Aileen Adams; who served under former Los Angeles Mayor Antonio Villaraigosa; Nina Vinik, an attorney who has a background in gun violence prevention; Vernetta Walker from BoardSource, an organization that provides support for nonprofit leaders; and Melissa Scholz, an attorney who has expertise in nonprofit law.” Deena Katz, co-executive director of the Women’s March Los Angeles Foundation, is president.

Not all donors may be known, since March For Our Lives registered as a 501(c)(4), which allows them to keep donor identities secret. Some sister rallies are self-funding and held GoFundMe campaigns to help raise money. 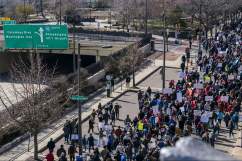 ‘March for Our Lives’ Crowd Size: How Many Attended Today? [PHOTOS]

#NeverAgain, a Group of Students, Started March for Our Lives

The events were organized by #NeverAgain, a group of students who survived the shooting at Stoneman Douglas High School. Never Again’s social media focus also helped the group grow so fast, Vanity Fair reported. Emma Gonazalez has 1.2 million Twitter followers now. David Hogg, Cameron Kasky, and Sarah Chadwick have more than 1 million followers combined. Kasky began the #NeverAgain movement by bringing about 20 classmates to his house and have a “day-long slumber party over the first weekend,” Vanity Fair reported. In addition, recent graduates Dylan Baierlein and Matt Deitsch treat Never Again like a full-time job, helping reach out to others through memes and social media. Their next step, they said, will be to create YouTube content that keeps people engaged.

The #NeverAgain group eventually had to get a small office space once they grew, donated by a supporter. They don’t reveal the office’s location because of death groups. They  have a group-text chat for sharing and vetoing ideas. Rules include not using profanity, no violence (either actual or symbolic), and no personal attacks. They even pulled a meme that showed a politician flailing while trying to defend gun laws, to the music of Curb Your Enthusiasm, because they felt it was too mean. 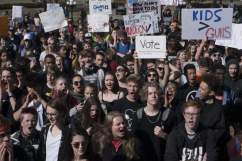 ‘March For Our Lives’ Live Stream: Watch 8 Streams From D.C. & Around the Country

GettyDemonstrators participate in a March for Our Lives rally on March 24, 2018 in Pflugerville, Texas.

If you’re wondering how March for Our Lives got nationwide and global attention so fast, it’s because it had help from a group who already had nationwide contacts. March For Our Lives was planned by #NeverAgain in coordination with Everytown for Gun Safety, BBC reported.

The gun control advocacy group, Everytown for Gun Safety, helped the #NeverAgain students plan and promote March for Our Lives. Everytown is a nonprofit group formed in 2014 that advocates for gun control. It combined two separate groups, “Mayors Against Illegal Guns” and “Moms Demand Action for Gun Sense in America.” Everytown was the source of the erroneous “18th school shooting of the year” quote, not #NeverAgain, that gained circulation after the Parkland shooting. This statistic was later determined to be inaccurate, because it included events such as a 31-year-old man’s suicide in a parking lot of a Michigan school that was closed. Time estimated the number of school shootings so far that year as being four.

Everytown was founded and originally funded by Michael Bloomberg, who gave $50 million to the group when it first launched. Bloomberg is the founder, CEO, and owner of Bloomberg LP, a financial services, mass media, and software company, and the former mayor of New York City. The Washington Post described Everytown this way: “Everytown is seeking to disrupt the debate with a richly funded, rapid-action and unconventional lobbying campaign that is starting to reap some results at the state level, though federal action is stalled.”

Everytown has a “Survivor Network” of 1,000 activists in 46 states (as of June 2016), composed of people who survived gun violence or knew someone who was killed in gun violence. They also have an email and social media list of 3 million followers, making it quick to get the word out about events to a large group of people. After every mass shooting, they send postcards to friends and family members affected, sharing their condolences and offering their resources.

Everytown’s primary legislative goal, according to The Washington Post, is more comprehensive background checks, especially in places where there are loopholes, such as gun shows. The group also partners with celebrities and major retailers to reshape the debate in popular culture, The Washington Post shared. It pushed retailers like Chipotle and Target to prohibit customers from bringing in guns. And it partnered with the NBA to create commercials about gun violence. In February 2016, it partnered with Julianne Moore to launch Everytown Creative Council, a group of celebrities, comedians, actors, and directors.

Giffords Courage to Fight also played a role in organizing the sibling marches around the country and helping provide logistics for the main event, Politifact reported. Moms Demand Action, whom you may also have seen, is party of Everytown. Move On and Planned Parenthood also supported the events.

If you’re wondering about the Women’s March’s involvement, they were the organizers for the March 14 National Walkout event. They promoted today’s event to their followers, since the two events ended up coordinating and helping each other since they happened just 10 days apart. In addition, Deena Katz, co-executive director of the Women’s March Los Angeles Foundation, is president of the board that helps March for Our Lives determine how to spend its donations. 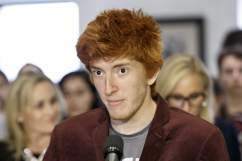 Loading more stories
wpDiscuz
0
0
Would love your thoughts, please comment.x
()
x
| Reply
Who funded and paid for the big March for Our Lives event today? And who helped organize it so fast on a national scale? Learn more here.