Mike Lee is reportedly the top nominee considered to replace Justice Kennedy on the Supreme Court.

Mike Lee is reportedly at the top of the list of people that Donald Trump is considering to replace Justice Anthony Kennedy on the Supreme Court, later this year. Earlier in the week, Justice Kennedy announced his intent to retire on July 31. Now, Lee and 24 others are being considered to replace Kennedy’s seat on the highest bench of law in the country.

Kennedy was known as the “swing voter” of the Supreme Court. Though he was traditionally conservative, he often swung to the left in landmark cases, such as the right or same-sex couples to marry and the overturning of a Texas law that restricted access to abortion members.

With Kennedy retiring, and with four established liberals and four staunch conservatives on the bench, the question of the next Supreme Court nominee’s political aptitude is on everyone’s minds–and it seems pretty unlikely that Mike Lee will be anywhere close to a swing voter, if elected to the Supreme Court.

Here are a few examples for why Mike Lee, a former tea party member, isn’t likely to be a swing voter any time soon.

Lee is a staunch conservative on every issue

He was one of a handful of Republicans who wrote a letter asking Trump to withdraw from the Paris Agreement, he believes that gun rights have little to do with “guns” and everything to do with “fundamental rights”, and he is a staunch pro-life politican (an issue that’s especially relevant, given the high possibility that Roe v. Wade will be overturned, if another conservative member joins the court).

Lee was also a significant member of the 2010 tea party movement, and was heavily involved in it through to around 2014.

According to CBS, the tea party movement is a collection of predominantly white older males who identify as conservatives and align with the strictest set of values in the conservative agenda: they usually vote Republican, they’re more likely than the average American to attend a religious service, they make a higher than average household income, and more than half of them keep a gun in the household.

The New York Times best explains the tea party movement, which gained momentum in 2010 but failed to hold onto any true staying power as a political entity, as an “incohesive mixture of libertarianism and social conservatism, of opposition to federal power and support for tearing down the wall of separation between church and state.”

Lee Has Acted Upon Tea Party Principles Throughout His Political Career

Over the course of his career as a politician, Lee has acted on behalf of the beliefs of the tea party in many of his attempts to dismantle government control over states. For example, when he was first running for Senate in 2010, Lee proposed an end to the Department of Education and the Department of Housing and Urban Development.

What’s more, in the past he has reportedly also vowed to eradicate social security, claiming that “the Constitution doesn’t give Congress the power to redistribute our wealth”, and he even proposed repealing the 16th amendment that authorizes the federal income tax.

In other words, Lee wants as little government interference with the American individual as possible. He is so against any form of universal healthcare that he was one of the key Republican players who led to the government shutdown in 2013 over Obamacare.

At the five year anniversary event for the tea party, Lee spoke about the values that he aligned with the tea party on.

Given that the role of the Supreme Court is often to determine whether or not a matter should be decided federally or left to state jurisdiction, Lee’s emphasis on state legislation could lead the overturning of Roe v. Wade, as well as the right for same-sex couples to marry.

As a staunch and traditional conservative, Lee has earned the respect and admiration of fellow conservative Ted Cruz, who has been his biggest supporter during Lee’s bid for nomination. Of Lee, Cruz said to Fox News, “I think the single best choice President Trump could make to fill this vacancy is Sen. Mike Lee.”

Cruz added, “Democrats have batted about 1,000 [with their Justices] voting the way they wanted on every single issue. Republicans at best bat five hundred…about half of the nominees Republican presidents have put on the court have turned into train wrecks, into liberal activists. The reason why I think the best choice that President Trump could make is Mike Lee is because I know beyond a shadow of a doubt that Mike Lee would be faithful to the Constitution and the Bill of Rights.” 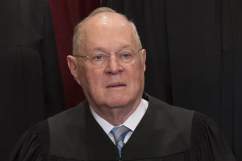 Loading more stories
wpDiscuz
0
0
Would love your thoughts, please comment.x
()
x
| Reply
Mike Lee is the current Senator of Utah and a former tea party member, currently considered by Trump officials to be the top nominee to replace Justice Kennedy for the Supreme Court.