Meanwhile, on Saturday night after midnight on the East Coast, 10 p.m. in Calabasas, Star hit the 10 million subscriber mark on YouTube which a a humongously big deal. Read more abut it here.

Anyway, the 29-year-old Alabamian lost more than 120,000 followers on YouTube in less than a week.

Lee, a celebrated make-up YouTuber with previously more than 5 million subscribers and millions more eyes on her channel, was recently embroiled in a racism scandal based on tweets unearthed from 2012. And though Jeffree Star had his own racism controversy, the brouhaha over Lee and other beauty-Tuber’s and their alleged racism has the video beauty community of billions dropping pallets and tea enough to fill a harbor. And Star’s comments on the matter may, in part, be the reason Lee’s follower count is dropping hourly, per Social Blade. Which can not be a good thing financially for the cosmetics vlogger on the beauty scene for more than five years.

Shortly before 8 p.m. Sunday, Laura Lee posted a tearful, sobbing “I’m sorry. I’m sorry you guys.” video called ‘My Apology,’ addressed to her subscribers and fans, something many had been asking for. And she apologies to Jeffree Star. (And he responded. Sort of. That shortly.)

“Six years ago I decided to retweet things that were so vile and hurtful …I have no excuses. I’m only here to say I’m sorry. I can’t even look at myself.”

She said her mother and niece have been threatened and begs for people to take out their anger on her not her family.

1. In a 15-Minute Video, ‘Racism,’ Jeffree Star Comes Clean About Racist Comments he Made

“I owe it to all of you to be brutally honest about my past, and I’m here today to discuss old videos of me that have been resurfacing lately. I want to clear the air about drama, rumors and being accused of being “racist”… I love and respect all of you for allowing me to be honest and real with you guys. I may not always be understood, but you get ME. My message has always been about self expression and loving yourself. I’m learning that still but it’s been a long journey.

With having such a huge social media platform, I’ve decided to start being 100% OPEN and talk about some serious subjects and my mistakes.”

In the video now seen by 20 million, ‘The Secret Life of Jeffree Star,’ Dawson goes inside and among myriad other scandals, controversies and in getting to the bottom of Star’s enormous wealth, his net worth is $20 million, they talk about the racism accusations and Star’s response. 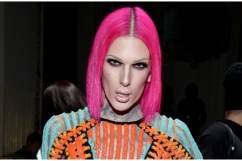 Laura Lee has been on YouTube since 2009 but would start to be known as a beauty influencer in 2013 with Instagram makeup glam shots. Her tutorials, hacks and reviews took off on YouTube and soon she was an official beauty guru who did makeup collaborations with brands Too Faced, and Violet Voss, did a lipstick shade for MAC Cosmetics and repped the Benefit brow pencil. This time last year, she was on the Today show promoting her ‘Laura Lee Los Angeles’ make-up line and launched two pallets, one called “Nudie Patootie.”

From Alabama, Laura Ann Lee, 29, was a preschool teacher’s aid and worked for a dermatologist’s office before taking to social with her makeup chops. She moved to Los Angeles and within a few years, Lee would be known as a highly successful beauty influencer with a collective roughly 7 million followers across her platforms: Instagram, Twitter and YouTube. Social Blade estimated her annual earnings as high as $840,000.

Then, On Aug. 13, a 2012 tweet from Lee surfaced. It’s blatant racist suggestion stunned fans and subscribers, detractors and aficionados.

“…tip for all black people, if you pull up your pants you can run from the police faster. Your (sic) welcome.”

That day, Lee stopped posting on Instagram; the last image was of her in Ibiza, Spain.

By Aug. 19, Social Blade reported that Laura Lee’s earnings average was $68 a day down from her peak of $3,700 a day just two days before the racist tweet was revealed.

4. Lee Tweeted an Apology Written on Notepad Blaming Her ‘Bama Upbringing. It Did Not Go Well, She Deleted Her Account & Then Came Back Promising a Video Explainer. She Delivered it Sunday

A video from a vlogger is what people want to see. A candid, open apology and discussion on video, on YouTube, her platform. Fans and foes called out Laura Lee for instead, posting one of the usual makeup videos ignoring the scandal.

The comments were brutal like, “Ain’t no amount of makeup is going to cover up your two faces,” and hundreds more along those same lines.

Hey guys,
I wanted to let you all know It’s taking me some time process and reflect on this situation. Just know a video will come soon

Lee, who lives in L.A. posted a video apology at around 4:45 p.m. Pacific time. The 4-minute edited video has her weeping, wailing, bellowing and pleading. And in some parts, she’s more stoic like when she says her family has been targeted and when she apologizes to Jeffree Star. (Almost there.)

Lee apologizes to “you guys.” It’s clear she is speaking directly to her fan base and followers. She says she’s sorry for anyone who was hurt by her racist tweets but does not speak to the racism directly rather says she was “ignorant” when she retweeted “vile” comments, she reminds viewers, six years ago. She says she’s a different person. The viewer will be the judge.

But despite Lee’s plea, her subscriber count continued its fall. That could change. But an hour after her apology was uploaded, her numbers kept falling.

When people stay silent, they're guilty. Let that show you who someone's true character really is.

Imagine trying to bully me but you actually end your own career instead ✌? pic.twitter.com/JZCYBjbpI3

Star took to Snapchat to further call out what he said was Lee’s hypocrisy and the karma in effect now.

But Lee posted Sunday night a crying video where she says the a photo of her her beauty-Tubers giving the middle finger and subsequent comments directed at Star were taken out of context and she said she was sorry.

Jeffree responded on Twitter in a now deleted tweet that was captured as a screenshot. He did followup with a side-eyes emoji and let his followers go from there.

So now that there’s a video out, albeit many days after the racist tweet was outed. But one commenter on Lee’s Twitter notepad ‘apology’ post found it ironic, saying Lee had attacked Star last year when he posted his Racism video apology and ended up being embroiled in her own racism scandal.

So what about Jeffree and how bad you tried to sabotage him? Doesn’t feel good to be on the other side of the window does it?Don’t ever bring up someone else’s mistake when you’ve clearly made the same. Smh it’s always the ones with the dirty hands pointing fingers. @JeffreeStar