Google Labeled for Reuse Perseids Meteor Shower - when, where and how to watch.

Perseid meteor showers are visible every year between August 9 and 14, depending on the particular location of the stream. It is one of the most spectacular and highly anticipated meteor showers of the year, and this year the shower will appear on a particularly clear night.

The Perseids occurs as Earth passes through the debris trail left by the Comet Swift-Tuttle, according to Space.com. NASA reports that Comet Swift-Tuttle is the largest solar system object that repeatedly passes close to Earth, and it completes a full orbit every 133 years. “The meteorites from the comet’s trail appear to come from the constellation Perseus, which lends the shower its name,” Space.com reports.

According to Dr Morgan Hollis of the Royal Astronomical Society, the shower will peak on the night between Sunday, August 12 and Monday, August 13. He said: “The best time to look will be on the night of August 12 when the sky is darkest, around midnight and in the early hours of the morning, at the peak of the shower.

Where & How to Watch The Meteor Shower

Time-lapse of the peak of the 2016 Perseid meteor shower over Noble CanyonMount Laguna, California. Cleveland National Forest. Epic fireball at 00:41 I produced the video by shooting 493 frames shot from 1:19 AM PDT to 4:55 AM PDT on August 12, 2016 with my Canon 6D and Sigma 15 mm at f/2.8 25 sec ISO 3200. I stayed up until dawn this morning and the night before shooting the Perseids. While the show didn't put out 200 meteors an hour, it was the best meteor shower I've seen in a long time. Also, beginning a few hours earlier the humidity got over 80% up here and started fogging up the lens. Fortunately I had a battery-powered lens heater ( Dew-Not ) that came to the rescue. Audio track is "Space Wind 01" by Ed Prosser https://onthenatureofthings.com/2016-08-13T09:20:55.000Z

According to Sky and Telescope, an astronomy magazine, viewers may be able to see around 60 meteors an hour during the peak and should be able to see some in the sky until the last week of August.

If you’re in the Northern Hemisphere, you should be able to spot the Perseids rising in the northeastern sky. “It’s best to wait until 11 pm or later, when the constellation Perseus will be higher in the sky,” according to Vox. It may also take up to an hour for your eyes to fully adjust to the darkness to view the meteors, NASA reports.

Last year, there were reports that viewers may have a hard time seeing the meteor shower due to light from the moon, but this year the meteor shower falls on a night with a new moon, allowing for excellent viewing conditions, according to Space.com.

Find The Darkest Area Possible, Away From City Lights 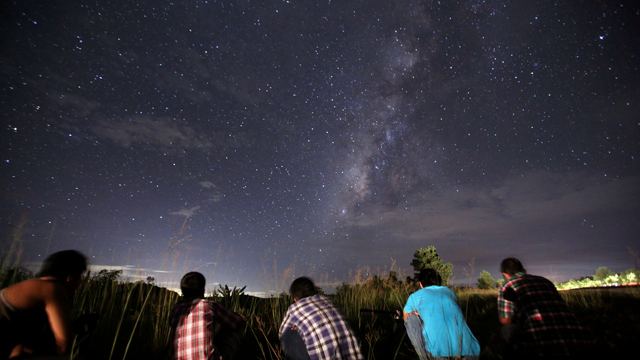 The shower is expected to be visible from across the country, but Space.com recommends viewers find the darkest place they can find to view the shower, to avoid light pollution from ruining the spectacle. Traveling even a few miles away from bright, urban city centers can make a huge difference in the visibility of the Perseids shower.

For viewers in Idaho, the best place to watch the meteor shower will be from the Central Idaho Dark Sky Reserve, which became the nation’s first gold-tier dark-sky reserve in December, 2017, according to Space.com. 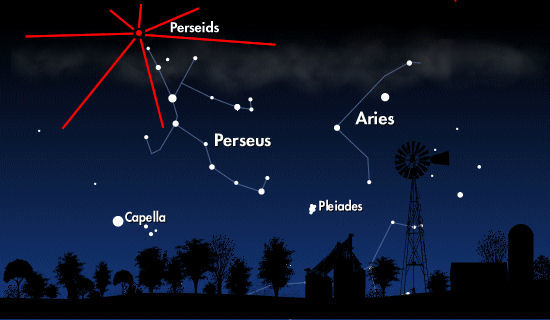 Accuweather recommends viewers “Lay on your back and watch the whole sky, not just the radiant point, and avoid looking at your phone and other light sources,” when viewing the meteor shower.

Space.com also recommends that users get to a dark destination early, as it takes approximately 30-60 minutes for your eyes to adjust to the dark. Bring some bug spray, set up a comfortable chair or blanket, relax and wait for the celestial show.

However, if you would rather stay indoors during the shower’s peak, the Virtual Telescope Project in Italy will be live streaming the 2018 Perseid meteor shower online.

Read More
Breaking News, Space
Perseid Meteor Shower: when, where and how to watch the spectacular celestial show this weekend.