Racist and other controversial right-wing rhetoric is part of Rick Shaftan’s style as a “conservative pollster and media consultant.” Or at least he’s employed sexist, homophobic and racist verbiage and continues to perhaps now feeling emboldened, in his role as top adviser for the Corey Stewart campaign in Virginia.

Shaftan has been advising conservative candidates for years and has a You Tube channel chock-a-block with vintage videos he’s produced for Tea Party and extreme wing right candidates.

Here’s what you need to know about Shaftan:

There's a lot of parallels between the "House Negro" and the GOP Establishment. http://t.co/EZMFKHAZ5u

2. Shafton Said Predominantly Black Cites Are ‘Shit-Holes’ & Has Not Shied Away From Racist Commentary, Although He Deletes Many of His Controversial Tweets. The Internet Doesn’t Forget

“I must have said something worse than that in all these years! They need to look harder,” Shaftan wrote on Facebook about his comment that cities including Baltimore, .

Shaftan suggested staunch conservative activist Phyllis Schlafly was a better honoree than Rosa Parks. He also said Rep. John Lewis has not accomplished anything but to have gotten “beat up.”

Phyllis Schlafly was a stalwart conservative who was an anti-feminist and fought against the Equal Rights Amendment, who once said that once a woman marries she consents to sex on demand, said to ignore Hispanic voters and focus on white voters, opposed civil unions, abortion, same-sex marriage and shortly before her death at 92 in 2016, published a book that made the case for a Trump presidency.

Rosa Parks was also an activist. Parks’ participation in the Civil Rights Movement and Montgomery Bus Boycott where she refused to take a seat in the back, is noted by historians as a pivotal moment in the movement.

Rep. John Lewis, D-GA, also was a key leader during the Civil Rights Movement and has been a member of Congress since 1987. Shaftan called him a “pompous ass.”

3. Spokesman for GOP Senate Candidate Corey Stewart, Shaftan Does Not Appear Unlike His Boss Who Has Cozied up to White Supremacists

There’s no shortage of derogatory statements made by Shaftan, many that can only be seen as being racist in nature. CNN reported that Shaftan ” …referred to Michael Brown, the black teenager shot by white police officer Darren Wilson, as a ‘thug’, saying that he ‘received justice at the hands of Officer Wilson’ in August 2014.”

“In response to the unrest in Ferguson, Missouri, following Brown’s shooting, Shaftan tweeted, “Animals. #Ferguson” in November 2014. In June 2017, he posted an article on Facebook about Michael Brown’s family settling a wrongful death lawsuit against the city of Ferguson for a reported $1.5 million with the remark, ‘This is what is known in ‘the community’ as ‘hitting the lottery.’ #Cash4Thugs.’

Shaftan’s candidate Stewart is reported to have aligned himself with white supremacists, is a staunch supporter for keeping Confederate monuments in place, and has refused public services for immigrants.

4. In 2013, Shaftan Was Fired From a NJ Senatorial Campaign for Expletives-Laden Rant. In a Video, he Referred to Now-Sen. Cory Booker’s ‘Crackhouse’

As a top aide to Republican New Jersey Senate hopeful Steve Lonegan, the Tea Party conservative who ran unsuccessfully against now-Sen. Cory Booker, Shaftan was thrown off the campaign team after in an interview he used expletives and questionable language and comments related to the then quasi-scandal involving Booker and an exchange with a stripper. Shaftan’s point was that Booker, in a Twitter exchange with a woman who posted suggestive images and said she worked at a strip club, said things “like what a gay guy would say.”

In a phone interview with Talking Points Memo, Shaftam said,

“It was just weird. I mean, to me, you know, hey, if he said, ‘Hey, you got really hot breasts man, I’d love to suck on them.’ Then like, yeah, cool. But like, he didn’t say that. It was like kind of like, I don’t know, it was like what a gay guy would say to a stripper. It’s the way he was talking to her. It’s just like like there was no sexual interest at all. I don’t know. To me, if I was single and you know like some stripper was tweeting me, I might take advantage of the perks of the office, you know?”

Oh, hey, Rick Shaftan is in the news again. It reminds me of this bananas interview @hunterw had with him back in 2013. https://t.co/PqnMtAB6xL

Booker and his aides said the exchange between Lynsie Lee, an Oregon-based adult club dancer, made headlines for what Booker said to the topless woman who reached out the the then-Senate hopeful via Twitter. His comments and her replies: “And the East Coast loves you and by the East Coast, I mean me.” Lee replied, “Well now I’m blushing.” Booker said, “Its only fair.”

Booker and his campaign downplayed the curious conversation. One aide said the most interesting part of the story was that the strip club where Lee worked was vegan, it was reported.

But Shaftan had other thoughts and shared them with TPM:

“This is strange. It’s just weird. … It’s like, ‘I don’t know who she is. I don’t know anything about her.’ Get the fuck out of here dude. You can’t follow her Twitter page and not know she’s got those great breasts. How do you fucking not know?” Shaftan said. “It’s just too odd and people they just wonder, like, who does this guy really want to work for? Who’s he representing?”

– Struck a trade deal with EU.
– Brought back US soldier remains from NKorea.
– GDP growth hit 4.1%.
– Americans are going back to work.

Shaftan earned a bachelor’s degree in philosophy from Manhattanville College, whose alum includes Kennedy’s. He earned his law degree in in 1985 spent a year as a Bronx newspaper editor. Shaftan then moved on to a couple of years doing admin work for regional and state Republican elected officials and want-to-be elected officials, including Florida’s GOP member of Congress Connie Mack.

In 1988, he founded his consulting business Mountaintop Media, and has been at it ever since: “Highly targeted strategies to maximize limited budgets. We handle polling from our in-house facilities and produce hard-hitting TV, radio and mail. Our aggressive approach to campaigns is reflected in our strong winning record. We are not interested in making nice. We play to win. Specialties: Polling and media for conservatives with the guts to win.”

Shaftan produced an ad for Paul Neheln, the self-described white nationalist and anti-Semite running aanst Paul Ryan in Wisconsin. Shaftan dismisses Neheln in an quote in the Daily Beast as having gone “Wacko.”

Shaftan-produced ads include local New Jersey candidate’s campaigns as well as national campaigns. And he even created an ‘ad’ on Steve Bannon. 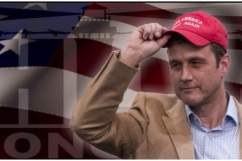