To cope with the worrisome situation, the internet has seen fit to take Tropical Storm Gordon and provide comic relief through a series of memes and gifs.

i have been waiting all hurricane season for tropical storm @GordonRamsay pic.twitter.com/OjpGckRif5

Naturally, these memes aren’t referencing the damage that Tropical Storm Gordon is predicted to inflict on the Gulf Coast, but rather the puns and pop culture references that Twitter and Instagram users have concocted. The most prominent of these references is that of celebrity chef and restauranteur Gordon Ramsay, who shares a first name with the impending hurricane. Ramsay is best known for presenting the reality cooking shows Hell’s Kitchen and Ramsay’s Kitchen Nightmares.

Many have been quick to point out that Ramsay’s famous temper is perfectly suited to convey the hectic nature of the hurricane. “Tropical Storm Gordon blowing through Florida like an episode of Kitchen Nightmares like, ‘this whole state is sh*te! Shut it down!'” wrote one user.

Another tweeted directly at Ramsay to alert him of the namesake storm. “@GordonRamsay have you heard there is a tropical storm named sfter [sic] you?,” they wrote. “At least it isn’t doing as much damage to people as you do to chefs.”

Florida is getting sandwiched by #Gordon. pic.twitter.com/hwCjun3W1U

Tropical depression seven is heading toward the Gulf Coast, forecast from Natl Hurricane Cntr. This will become Gordon. Tropical storm watch now from LA to AL. Related…I’d like to hear Gordon Ramsay get frustrated trying to forecast a tropical system. pic.twitter.com/Kc0lGu1nxU

Tropical Storm Gordon has quite the temper. (cc @GordonRamsay) pic.twitter.com/RoH0rHEqF7

In an interview with Esquire, Ramsay, 51, spoke about his infamous temper. “I don’t have a temper, I have passion. I get frustrated and f*cked off and wound up with idiots quickly, so I get straight to the point,” he said. “Cut the bullsh*t. That’s healthy. I’ve been on my a*se before, but I have a lot of determination, and I’m not weak.”

“Next day, it’s sunrise, you’re at the bus stop again, and you’re back to work. I’ve never been one for pondering or questioning and thinking,” he continued. “Waste of time. Dust yourself down and get back up. Because that journey of coming back to the very top is better than actually being at the top. You find out so much about yourself and who your friends are. Do that several times across 25 years, and you end up a wise old f*cker.” 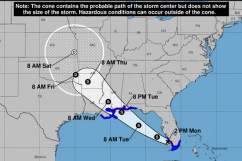 Read More
Memes
Check out all the memes inspired by the impending tropical storm.