Facebook/Hunt County Jail Shaun Lucas, right, has been charged with murder in the shooting of Jonathan Price, left, in Wolfe City, Texas.

Shaun Lucas is a white police officer in Wolfe City, Texas, who has been charged with murder in the shooting of Jonathan Price, who was Black. The 31-year-old Price was shot and killed by Lucas, 22, on Saturday, October 3, after Price intervened in a domestic fight between a man and a woman at a gas station in the small northeast Texas city, his family says.

The shooting was investigated by the Texas Rangers, a statewide police agency and part of the state’s Department of Public Safety, and Lucas was charged with murder on October 5, according to a press release from the DPS obtained by Heavy.

Lee Merritt, an attorney who is working with Price’s family, said on Twitter after Lucas’ arrest, “This didn’t happen quickly. It should happened the day he murdered JP. John should still be here. This is step one. Let’s see it through to justice.”

Price, a Wolfe City native, former high school sports star and a city public works employee who also ran his own personal training business, was beloved in the community, according to his family and friends. He has received an outpouring of support on social media and at a vigil held Monday night before Lucas’ arrest, with many calling for justice for Price.

“In Wolfe City, he was known as a hometown hero. Motivational speaker, trainer, professional athlete and community advocate— he was dearly loved by so many,” Merritt said on Facebook about Price. Wolfe City is is home to about 1,400 people and is located about 15 miles north of Commerce, Texas, and about 70 miles north of Dallas. City and police department officials have not commented beyond a brief statement saying the Texas Rangers were investigating and the officer, now identified as Lucas, had been placed on administrative leave.

Here’s what you need to know about Officer Shaun David Lucas and the shooting of Jonathan Price:

1. Price’s Family Say Lucas Used a Taser on Him While His Hands Were Raised & Then Shot Him as He Walking Away When His Body Reacted to Being Stunned

According to the press release from the Texas Department of Public Safety, Lucas responded about 8:24 p.m. to a “disturbance call” in the 100 block of Santa Fe Street for a “possible fight in progress.” Witnesses have said the shooting occurred at the Exxon gas station and Kwik Chek convenience store.

The Texas Rangers said in the statement, “Lucas made contact with a man, later identified as 31-year-old Jonathan Price, who was reportedly involved in the disturbance. Officer Lucas attempted to detain Price, who resisted in a non-threatening posture and began walking away. Officer Lucas deployed his Taser, followed by discharging his service weapon striking Price. EMS was notified and PRice was transported to Hunt Regional Hospital, where he later died.”

According to the press release, “The preliminary investigation indicates that the actions of Officer Lucas were not objectionably reasonable.” Police said the investigation led to the murder charge. “No additional information is being released at this time.” It is not known if the shooting was recorded on video, either surveillance video at the gas station or by police dashboard cam or body cam.

Merritt, the attorney working with Price’s family, said on Facebook on Sunday that Price, “noticed a man assaulting a woman and he intervened. When police arrived, I’m told, he raised his hands and attempted to explain what was going on. Police fired tasers at him and when his body convulsed from the electrical current, they ‘perceived a threat’ and shot him to death.”

Two witnesses, Price’s friends, told WFAA’s Alex Rozier the couple involved in a domestic dispute were both white. Price’s friends told Rozier the three of them went with to the gas station convenience store for cigarettes and saw the couple fighting outside. According to Rozier, the two men said Price intervened and stopped the man from “beating” the woman.

They said by the time Lucas arrived, the incident was over, but the officer “went right to Jonathan, the officer did not go after the man fighting the woman” in the domestic violence incident, Rozier tweeted. The witnesses told Rozier the officer used his Taser on Price and then shot him while Price was about 8 yards away. The officer then handcuffed Price after he was shot, Rozier tweeted.

#NEW I just spoke with the two men who arrived at the gas station with #JonathanPrice when he was shot and killed by a #WolfeCity Police Officer.

They did not want their names released but this is their account of the incident. pic.twitter.com/KVqh1n64qd

According to eParisExtra News, Price was shot in the chest. His mother, Marcella Louis, told WFAA she went to the scene after being called about the shooting. 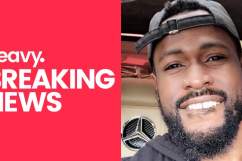 2. Lucas, Who Has 4 Traffic Offenses on His Record, Is Being Held at the Hunt County Jail on $1 Million Bail

This didn’t happen quickly. It should happened the day he murdered JP. John should still be here.

This is step one. Let’s see it through to justice. pic.twitter.com/ydC124MYbG

Lucas is being held at the Hunt County Detention Center on $1 million bail after being booked into the jail Monday night, October 5. It is not clear when Lucas is scheduled to appear in court for the first time. It is not also clear if he has hired an attorney who could comment on his behalf and he could not be reached for comment by Heavy prior to his arrest.

Online records show Lucas has had four prior run-ins with the law. In June 2018, Lucas was stopped in Hunt County and issued a misdemeanor for use of window reducing matter on windows (glass coating material) and paid a fine. In January 2016, he was charged with speeding above 85 mph in a 65 mph zone in Rockwall, Texas, and was fined $227. He was also cited in Rockwall in February 2016 for another misdemeanor, violating a driver’s license restriction, and was fined $177. In July 2017 he was cited again with a misdemeanor in Rockwall for speeding and again paid a $227 fine.

Price’s father, Junior Price, spoke out at a vigil Monday night before Lucas’ arrest, according to CBS DFW, and said, “I want to see what the man gets… what he has coming to him for killing my son.”

3. Lucas Is 1 of 3 Officers Working for the Wolfe City Police Department & Residents Say He Is Not From the Small Texas Town

FacebookShaun Lucas is the Wolfe City police officer who shot and killed Jonathan Price in Texas.

Lucas is one of only three police officers working for the. tiny Wolfe City Police Department. The other two officers are the city’s police chief, Matthew Martin, and Sergeant Jarred Hayes. It is not clear how long the 22-year-old Lucas has worked for the Wolfe City Police Department. Details about his personnel record while on the force have also not been released and it is not clear if he has previously faced complaints or been involved in use-of-force incidents.

Unlike Price, Lucas is not well known in the small town of Wolfe City, according to social media posts from residents. Lucas did not grow up in Wolfe City. Jail records show he lives in Greenville, Texas, about 20 miles away from where the shooting occurred. Public records show he has lived there since 2018.

Lucas has previously lived in Lone Oak, Forney, Corpus Christi and Rockwall, Texas, according to public records. He lived in Rockwall from 2007 to 2016.

Martin has not commented about the shooting, but Merritt told CBS DFW he talked to the chief, who told him he saw video of the shooting and “wasn’t happy with what he saw.”

4. Price Is Being Remembered as a ‘Pillar of the Community’ in Wolfe City

Price, who would have turned 32 in November, grew up in Wolfe City and graduated from Wolfe City High School, according to his Facebook profile. He studied at Hardin-Simmons University, where he played football for one season, and Sam Houston State University, before returning to his hometown and working for the city in its municipal works department. He also started a personal training company, Repetitive Reps, and was known in the community as “Coach Price.”

Wolfe City resident Kyle Sanders told WFAA Price was a “pillar of the community.” He added, “We all love him and think so highly of him and just the nicest guy you could ever meet. We’re all devastated, shocked, we don’t really know what to do or where to go from here.”

Middlebrooks wrote on Facebook that Price’s death was “purely an act of racism.” He said in his post:

See this face? This is the face of one of my childhood friends. The face of my first ever favorite teammate. The face of a good man. But unfortunately it’s the face of a man whose life was taken away from him last night with his hands in the air, while a small town East Texas cop shot him dead. Why? Bc he was trying to break up a fight at a gas station… for some reason he was singled out. I’ll let you do the math. There’s no excuses this time…’he was a criminal’… Nope, not this time. ‘He resisted arrest, just comply with the cops’.. Nope that one doesn’t work this time either. This was purely an act of racism. Period. So, for all of you that think this is all bullshit, you need to check yourselves.

Middlebrooks added on Twitter, “My friend tried to break up a fight between a man and a woman at a gas station, bc that’s how we were raised. Don’t put your hands on a woman. Yet he was singled out in the fight, shot and killed… unarmed… no weapon… just his skin color. … I am certain of it… so is everyone else in that predominantly white, country town of 1400 people… including my friends, who are white, that were with him when it happened… now is not the time to come at me with bs like this. Take a step back.”

5. Lucas Faces 5 to 99 Years in Prison if Convicted

MORE: Statement from DPS Texas Rangers in their arrest of Wolfe City police officer Shaun Lucas for the murder of #JonathanPrice. pic.twitter.com/TI0KY1LAlO

Lucas has been charged with murder and faces 5 to 99 years in prison if convicted.

According to the Department of Public Safety press release, “The investigation is being conducted by the Texas Rangers, with the cooperation of the Wolfe City Police Department and the Hunt County District Attorney’s Office.”

The Texas Rangers have investigated other high-profile cases involving police shootings in Texas in recent years. The Rangers led the investigation into the shooting of Botham Jean, a Dallas man who was killed in his own apartment by off-duty Dallas police officer Amber Guyger in 2018. Guyger, Jean’s neighbor, was found guilty of murder and was sentenced to 10 years in prison in October 2019. She will be eligible for parole after serving 5 years.

Another Dallas-area officer, Roy Oliver, who worked for the Balch Springs Police Department, was charged with murder in the April 2017 shooting of Jordan Edwards, a 15-year-old boy who was killed by Oliver when the officer responded to a loud party. Oliver was found guilty of murder in 2018 and was sentenced to 15 years in prison.

Read More
5 Fast Facts, Breaking News, Crime, Police, Texas
wpDiscuz
0
0
Would love your thoughts, please comment.x
()
x
| Reply
Shaun Lucas is a police officer in Wolfe City, Texas, who has been charged with murder in the shooting of Jonathan Price.