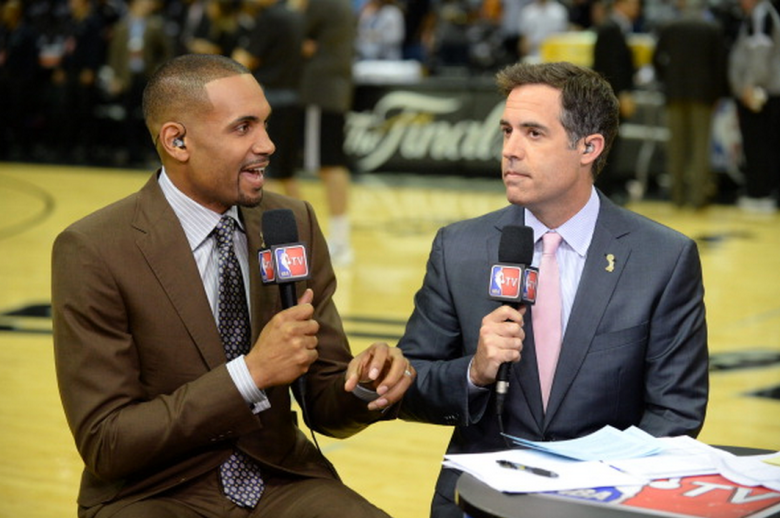 NBA analysts Grant Hill and Matt Winer before the game between the Miami Heat and San Antonio Spurs during Game Five of the 2014 NBA Finals at AT&T Center on June 15, 2014 in San Antonio, Texas. NOTE TO USER: User expressly acknowledges and agrees that, by downloading and/or using this photograph, user is consenting to the terms and conditions of the Getty Images License Agreement. Mandatory Copyright Notice: Copyright 2014 NBAE (Getty)

Grant Hill used to grace the hardwood and our TV screens with his playing skills, and for the past two years his stage has been the same, but his role has changed. Hill once again will be joining CBS’ NCAA March Madness broadcast team for his second straight year to bring you all the latest updates and analysis of the games as they unfold in the next three weeks.

And here’s what you need to know about Grant Hill: 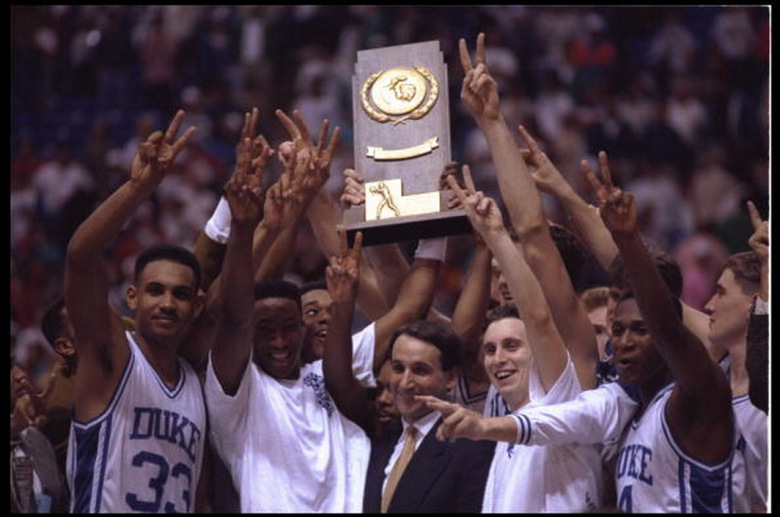 Head coach Mike Krzyzewski and his Duke Blue Devils revel in their glory after winning their second consecetive NCAA basketball championship by beating the Michigan Wolverines on April 6, 1992 at the Hubert H. Humphrey Metrodome in Minneapolis, Minnesota. The Blue Devils defeated the Wolverines 71-51. Second two the left is Grant Hill #33. (Getty)

In 1990, despite his mom wanting him to attend Georgetown and his dad pushing for UNC, Hill enrolled at Duke University to play ball for under Coach K. In his four-year career with the Blue Devils, Hill reached multiple milestones and had a major impact on the success of the program.

Hill’s first two seasons at Duke both ended in being crowned the NCAA national champions. The Blue Devils’ 1991 and 1992 national championships were the first time a Division I program won back-to-back titles since UCLA in 1973.

Although Duke lost two major players – Christian Laettner and Bobby Hurley – to graduation and the NBA, Hill did not skip a beat his junior and senior years. In 1993, he won the Henry Iba Corinthian Award as the nation’s top defensive player and was a second team All-American. And as a senior, Hill was named ACC Player of the Year, first team All-American and led Duke to the NCAA championship game, but the Blue Devils fell to Arkansas, 76-72.

In his four-year career, Hill became the first player in ACC history to amass more than 1,900 points, 700 rebounds, 400 assists, 200 steals and 100 blocked shots. With his success, Hill became the eighth player in program history to have his jersey number, 33, retired. Hill graduated with a double major in Political Science and History.

2. Hill Was a Seven-Time NBA All-Star

Following his career at Duke, Hill was the third pick in the first round of the 1994 NBA Draft. The 6-foot-8 forward was selected by the Detroit Pistons.

As a rookie, Hill averaged 19.9 points, 6.4 rebounds, 5.0 assists and 1.8 steals per game, was named to the NBA All-Rookie First Team and shared the NBA Rookie of the Year Award with Jason Kidd. Hill also became the first Pistons’ rookie since Isiah Thomas in 1981–82 to score 1,000 points. In his second year with the Pistons, his 10 triple-doubles led the NBA in triple-doubles, and he won the gold medal in the 1996 Olympics with the U.S. Men’s Basketball Team.

And these are just a few accomplishments during Hill’s 19-year NBA career. During his NBA tenure, Hill was a seven-time NBA All-Star, a 1997 All-NBA First Team selection, a four-time All-NBA Second Team selection and a three-time recipient of the NBA Sportsmanship Award.

Hill’s accomplishments are spread out over four teams. He played for the Pistons until 2000. Then Hill played for the Orlando Magic until 2007, the Phoenix Suns until 2012 and finished out his career with the Los Angeles Clippers – he retired in 2013 after playing just one year in L.A. 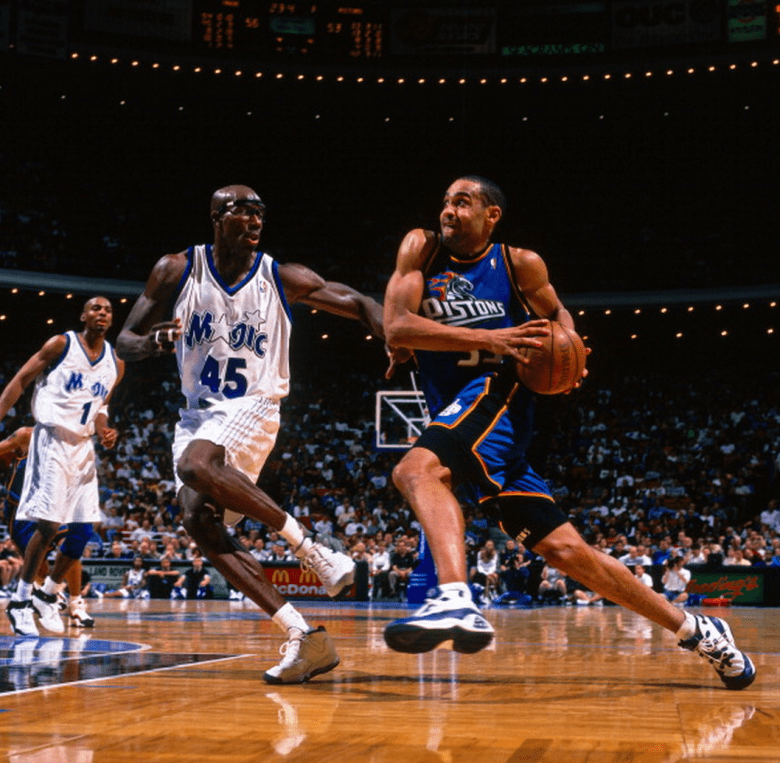 Grant Hill #33 of the Detroit Pistons dribbles against Bo Outlaw #45 of the Orlando Magic during a game circa 1999 at the Orlando Arena in Orlando, Florida. NOTE TO USER: User expressly acknowledges and agrees that, by downloading and or using this photograph, User is consenting to the terms and conditions of the Getty Images License Agreement. Mandatory Copyright Notice: Copyright 1999 NBAE (Getty)

During his nearly 20-year career in the league, Hill was one of the highest paid basketball players of all-time. He earned a $140 million salary and additionally received roughly $80 million in endorsements.

Hill’s endorsements included advertisements for McDonald’s, TAG Heuer watches, a shoe line for Fila, apparel for Nike and Adidas. He was also the focus of one of Sprite’s longest-running advertising campaigns – “Grant Hill Drinks Sprite.” And in 2014, Hill and his wife Tamia were recently featured in an AT&T ad.

4. Hill’s Father Was a NFL Running Back 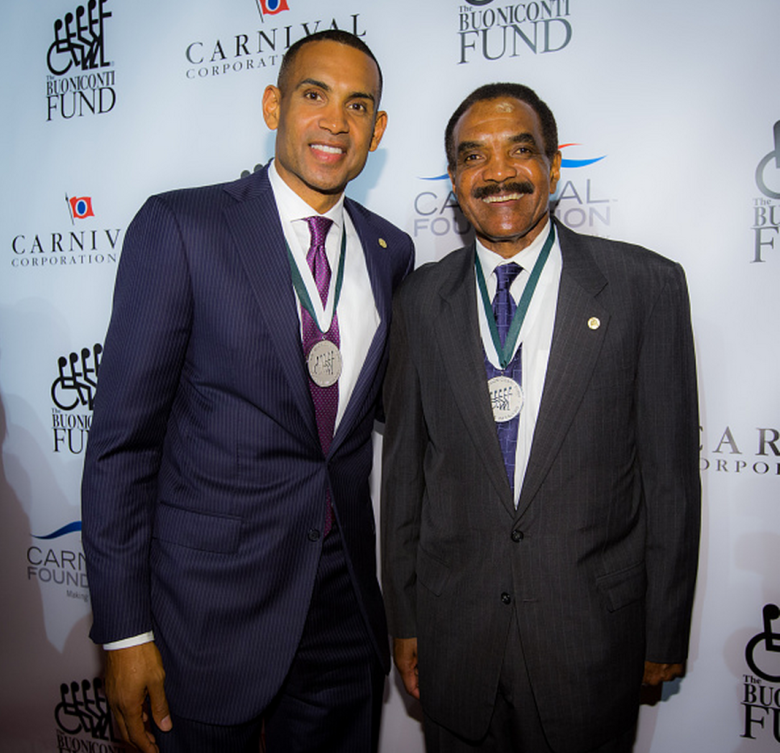 Grant Hill and Calvin Hill attend the 29th Annual Great Sports Legends Dinner to benefit The Buoniconti Fund to Cure Paralysis at the Waldorf Astoria on September 29, 2014 at New York City New York. NOTE TO USER: User expressly acknowledges and agrees that, by downloading and/or using this photograph, user is consenting to the terms and conditions of the Getty Images License Agreement. Mandatory Copyright Notice: Copyright 2014 NBAE (Getty)

Playing at the professional level runs in Hill’s blood. His father Calvin is a retired NFL running back who played from 1969-1981. Calvin played for four teams including the Dallas Cowboys, Washington Redskins, Cleveland Browns and spent the 1975 season with The Hawaiians of the World Football League.

Calvin went to Bronx Riverdale Country High School in New York before taking his football skills to Yale. Calvin was the 24th pick in the first round of the 1969 NFL Draft and was selected by the Cowboys. In his fourth season in Dallas, he became the first Cowboy running back to have a 1,000-yard rushing season, he totaled 1,036 rushing yards that season. And Calvin turned around and exceeded his own mark the next year – compiling a total of 1,142 yards rushing. He also helped the Cowboys to a Super Bowl VI Championship.

In his 12-year career, Calvin was selected to the Pro Bowl four times, a two-time All-Pro selection and the 1969 NFL Offensive Rookie of the Year.

5. Hill Wife Is a Singer-Songwriter 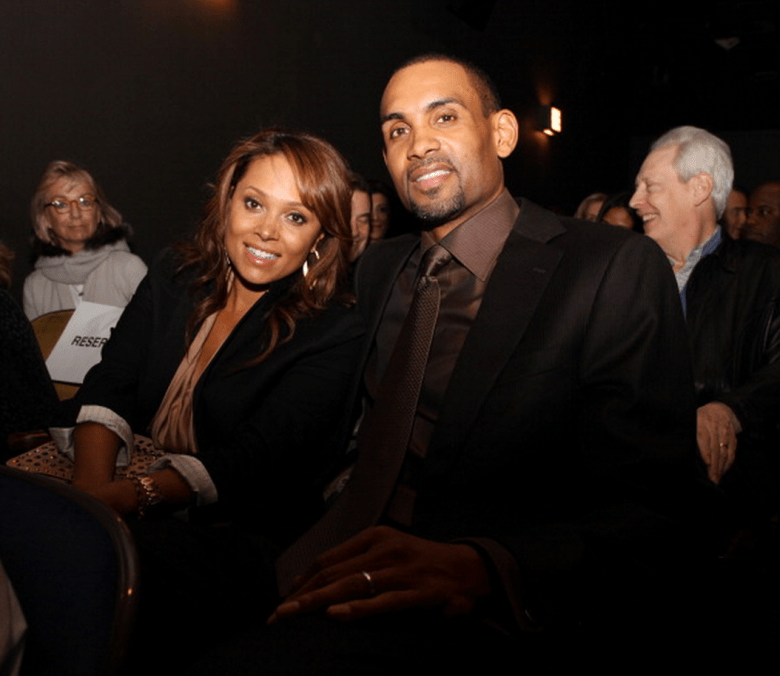 Hill was introduced to Tamia Washington, 39, by singer Anita Baker. Hill was playing for the Pistons at the time and Tamia, who is from Canada was working on her singer-songwriter career. Tamia’s music spans several genres including R&B, neo soul, hip hop soul, pop, gospel, jazz and soft rock.

In 2003, Tamia was diagnosed with multiple sclerosis. Although she said the disease is seemingly in remission and that she has occasional symptoms but they are controlled, she opened up to Extra in 2005 about her outlook on the disease and her and Hill’s involvement in fitting the disease and finding a cure. Tamia said:

It wasn’t a death sentence.

We’re just pushing forward and hoping that in the next ten years there will be a cure.