Cook’s family has been nothing but supportive throughout his career at Michigan State. (Instagram)

Connor Cook is a legend in Michigan State athletics and is looking to make a name for himself on the Oakland Raiders. The Raiders drafted Cook at the beginning of the 4th round of the 2016 NFL Draft.

He’s the winningest quarterback in Spartan history, the all-time leader in touchdown passes and total yards and the Big Ten quarterback of the year. Cook has one of the most supportive families in all of college sports and, naturally, the group has some strong athletic ties. His father was a college football player at Indiana while his mother played basketball at Cincinnati.

Here’s everything you need to know about the football family:

1. Cook’s Father, Chris, Played Football at Indiana in the 1980s

Connor Cook didn’t just happen upon his football talent. He inherited it.

The Michigan State quarterback’s father, Chris, played college football at Indiana from 1982-84. Chris was recruited by Lee Corso out of Carmel, Indiana and played one season for the legendary coach before the Hooisers fired him. He also played under Sam Wyche in 1983 before he left for the Cincinnati Bengals.

All three of Chris’ college seasons were losing efforts, including an 0-11 effort during his senior season. Thirty years after he left Indiana, Chris watched his son compete against his alma mater. He didn’t even consider who he would be rooting for. Connor told Michigan Live in 2013:

“I think that’s cool, but it doesn’t really mean anything.Playing against Indiana is just another opponent.I think he’s pretty close to the university still, talks to some people, still has all his buddies that live in Indiana, and they all have kids that go to that school. I mean, I don’t really think it’s going to affect him in any way.”

Chris went on graduate from Indiana with a degree in public affairs and, per his Linkedin profile, he works as a District Sales Manager for Bosch Rexroth. 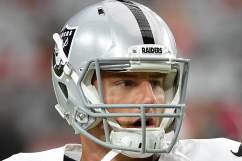 Cook’s mother Donna was a constant source of support early in his career. (Instagram)

Don’t count out Donna Cook from the athletic talent pool either. Connor’s mother played basketball at Cincinnati and her competitive nature may have rubbed off on her son this season.

Donna actually wrote the word “Perfection” on the inside of a cooler Connor would bring to his high school football practices. He saw the word every time he opened it and, even to this day, credits the word as a motivator throughout his career.

Jackie Cook was a social media sensation when she joined her family at the Rose Bowl last year. (Instagram)

Athletic talent really does run in the Cook family. Connor’s sister, Jackie, was a standout in her own right, competing for the Old Dominion basketball team throughout her four years of college.

As a senior Jackie became the 30th player in program history to score 1,000 career points and earned Third-Team All-CAA honors as well. Throughout her final season on the hardwood, Jackie started in all but one game and scored in double figures in 22 of 31 matchups.

When she wasn’t sinking shots, Jackie was focused on leaving a legacy at Old Dominion. She started the Fellowship of Christian Athletes while studying and also worked on the Student Athlete Advisory Committee and the Fox News University College Challenge.

Jackie also made social media headlines in 2014 when she was spotted on the sidelines. She was also an unwitting part of an Ohio State prank in 2013 when Buckeyes fans sent photos of Jackie in a bikini to her brother following Michigan State’s 34-24 victory that season.

Jackie Cook has settled into her West Coast life since graduating from Old Dominion. (Instagram)

After graduating from Old Dominion in May 2013, with a Bachelor of Science degree, focusing on communications, Jackie started working at Moen Inc. where she started as an inside sales representative. She then moved on to Regional Inside Sales Rep, working throughout Ohio, before accepting a job as territory manager in San Diego in December 2014.

According to her Linkedin account, Jackie’s responsibilities on the West Coast include “Maintaining 60 wholesale target accounts including quoting projects, new product presentations, inventory and delivery information, literature requests and RGA’s” as well as preparing and presenting “sales proposals, merchandising, marketing and promotional programs to key accounts within assigned region.”

5. The Cook Family Was Always Focused on Sports

The Cooks are a sports family. It’s an identity they’ve always embraced and a focus they’ve had since the very beginning. Chris Cook, Connor and Jackie’s father, told Michigan Live was clear from the get-go his son had leadership potential on the field:

“Really, when they’re young, it’s not like they were looking at his ability to throw the football. A lot of it had to do with leadership and people following him, kids were attracted to him.”

Although his focus is now on football, Connor was a strong basketball player when he was younger as well. He played the sport throughout middle school and competed at high-level travel basketball until ninth grade. Eventually he gave up his hoops dreams to establish himself on the gridiron and it was a decision that shaped his entire life.

Connor graduated from Walsh Jesuit as a two-star prospect in the 2011 recruiting class. He received a handful of recruitment letters, despite being ignored by his local school Ohio State, before finding success at Michigan State.

Read More
College Football, Connor Cook, Michigan State
The Oakland Raiders quarterback has had plenty of success on the football field. Learn more about the family that has been there to support him.