Wimbledon is the oldest tennis tournament in the world, with origins traced back to 1877. It is also widely considered the most prestigious-- drawing high-profile spectators, with British royalty topping the list.

The royal connection to Wimbledon dates to 1910, when King George V became patron of the All England Club. The tradition will continue on Sunday as Prince William and the Duchess of Cambridge are expected to watch the men's final.

The Royal Family is seated in the Royal Box at the All England Club's Centre Court, which has been used for the entertainment of friends and guests of Wimbledon since 1922. Click through the gallery to see and learn more about the Royals' appearances at Wimbledon in recent history. (Getty) 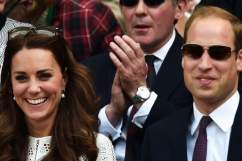 Royals at Wimbledon: 5 Fast Facts You Need to Know

Read More
British Royalty, Sports, Tennis
Wimbledon is the oldest, and one of the most prestigious tennis tournaments. Click through the gallery to see and learn more about the Royals' appearances at the All England Club in recent history.