Getty Michael Phelps holds up one of his 23 gold medals.

Phelps top performance came at the 2008 Bejing Olympics where he was a perfect eight for eight, picking up gold medals in all eight of his events.

Fans hoping to see Phelps compete in the 2020 Olympics will be disappointed unless he has a change of heart. Phelps has reiterated his desire to stay retired. Phelps spoke with Sports Illustrated’s Tim Layden on how he came to the decision.

“I’m at peace with how things ended,” Phelps told Sports Illustrated. “I’d rather have a healthy body in 20 years than kill myself more now. To me, it’s a no-brainer.”

Don’t think just because Phelps has said he is retired people are not trying to talk him out of it. Even his own mother, Debbie Phelps, has tried to campaign for a 2020 performance. Phelps has had to exercise some tough love, and explained to Sports Illustrated what he told his mother.

“’Mom, don’t start this now,'” Phelps told Sports Illustrated. “‘If you want to go to Tokyo, I’ll take you to Tokyo. We don’t need the Olympics for that.’”

Phelps appears to be enjoying post-Olympic life spending time with his wife, Nicole and son, Boomer. For now, fans will have to be content watching highlights of his past performances.

Here is Phelps last race in the 2016 Olympics. 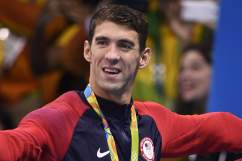 Read More
Michael Phelps, Swimming
Michael Phelps won a total of 28 medals during his Olympic career, including 23 gold medals. Find out the details on his historic career.