At its core, tennis may be an individual sport in that there’s only player on one side of the net. But sit down and watch for even a couple minutes, and you’ll instantly notice that there are teams involved, too. Players are constantly looking up to their player’s box for support, advice or for someone to complain to. They run immediately to the stands after a big win. The most successful players know the importance of family.

There is perhaps no better example than Roger Federer, whose support system is loaded. His parents raised him the right way, his wife can relate to the grind of being a professional athlete, and his four kids have provided an extra dose of inspiration to help him remain dominant into his late 30’s.

Here’s a closer look at the family behind one of the greatest players in the history of the game:

1. His Wife Is a Former Professional Tennis Player

Australia is pretty important to Federer. Not only is it the place where he has captured five Grand Slam titles, but it’s also where he first met his wife, Mirka (née Vavrinec), as the two both competed for Switzerland at the 2000 Sydney Olympics.

“We spent two weeks together, that’s how we got to know each other and on the last day before we left, we kissed for the first time in Sydney,” says Roger.

Mirka, who received guidance from tennis legend Martina Navratilova when she was younger, won three ITF singles titles, advanced to the third round at the 2001 US Open and rose to No. 76 in the world, but she ultimately had to retire at the age of 24 due to a handful of foot injuries. But not before she and Roger had a chance to play together at the Hopman Cup:

Federer explained the importance of having a former player by his side:

I think it’s a great help that she actually played. I never stated dating a tennis player because of that, actually, sort of 10 years ahead. But in my situation, I think it really does help, because she knows in some ways what it takes, and she did it on a level that was still very good but not at my level.

2. They Have Twin Daughters

Federer Twin Daughters Cincinnati CelebrationRoger Federer makes a rare foray into his player's box to embrace his family and team after winning a seventh Cincinnati title.2015-08-23T22:37:23.000Z

July of 2009 was a pretty big month for the Federer family. On July 5, Roger outlasted Andy Roddick in one of the greatest matches of all-time to win his sixth Wimbledon title. Less than three weeks later, on July 23, Mirka gave birth to twin daughters, Myla Rose and Charlene Riva.

For Roger, having his kids and wife close by is a necessity as he travels the world and continues his playing career.

“I would be unhappy on the tour without them,” he says. “I would retire… It’s good for my mind, when I come back from a match and I’ve lost, they’re there and don’t care if you’ve won or you’ve lost. It’s great.”

Roger Federer's twin sons and daughters at Wimbledon 2016Roger Federer: "I like that my kids enjoy the challenging life I have. They like tennis enough to come watch my matches from time to time – they always ask me if they can bring some books out if they get bored!"2016-07-03T12:53:25.000Z

Almost five years after Roger and Mirka welcomed their first twins to the world, she gave birth to twin boys, Leo and Lennart “Lenny”, on May 6, 2014.

Finding a way to raise two sets of twins while still perfecting your craft at the highest level in the world is not an easy balance to find, but Federer has somehow accomplished exactly that. And it hasn’t gone unnoticed to other top players.

“I’m still far off from him,” said World No. 2 Novak Djokovic shortly after becoming a father in October 2014. “With four kids it’s pretty amazing to still play at such a high level as he does. I understand what an effort it is with one.”

Apparently, having twins runs in the family. Federer’s only sibling, older sister Diana, is a mother to a set of boy-and-girl twins, while his maternal grandmother was also a twin.

4. His Parents Met in South Africa & Raised Roger in Switzerland

Born in Switzerland, Roger’s father, Robert, moved to South Africa with a group of friends when he was in his 20’s. That’s where he met Lynette, who grew up in Johannesburg and was a multi-sport star. She played field hockey at a high level but ultimately had to quit due to leg injuries.

Roger and Lynette married in 1973 and gave birth to Roger on August 8, 1981. It was clear from an early age that he was a gifted tennis player, and it was important that the parents–who were both experienced players themselves–had the right level of involvement.

“It was also important for them to give me space and to trust my coaches. Parents need distance from the coaches,” said Roger. “But my parents still kept an eye on everything.” 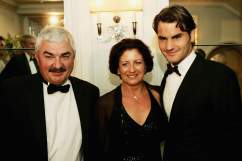 Roger Federer in full daddy mode! And of course he is a champ at it! With Myla and Charlene ?‍?‍?‍?? in Miami pic.twitter.com/9AZLcjEoJb

Roger’s mom once said that “the children have to put their hearts and souls into (playing a sport). They cannot be forced to do it, not by the mother, the father, the school or the coach.”

Taking a page out of his parents’ book, Federer is making sure not to pressure his kids into following in their parents’ footsteps.

“I don’t know if the kids are ever going to play tennis at a high level like that,” he said. “Honestly, I think it all depends on how things are going to be when we settle in Switzerland, and what sport they are going to take up. But I think for any kid it’s important for them to enjoy what they’re doing, whatever sport that is.” 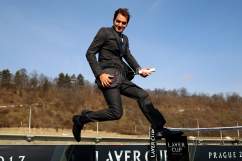 Roger Federer Net Worth: 5 Fast Facts You Need to Know

Read More
Roger Federer, Tennis
Roger's Federer's wife, four kids and parents make up one of the strongest support systems in all of tennis. Meet his family.