Shaun White appears to be having a resurgence at the 2018 Winter Olympics, but this past fall it looked like White may not get a chance to redeem himself from his disappointing 2014 performance. While training in New Zealand last October, White suffered a brutal crash while trying to complete a double cork 1440 as White hit his head on the halfpipe.

According to the Los Angeles Times, White needed 62 stitches to repair his forehead and tongue while also suffering a pulmonary lung contusion. White admitted in an interview with ABC News that it may have been the worst injury of his career.

“It was the most visually jarring injury,” White told ABC News. “I’ve had a broken bone, but it’s not like you visually see the snapped bone. This was like … you can’t avoid it … I’m looking in the mirror like, ‘I don’t even recognize this person.'”

White discussed with ABC News the risks associated with the sport along with the devastating effects of his New Zealand crash.

It was a pretty rough thing to go through, and such a bummer because I was having the best day. I was crushing practice, things were great, and just one kind of little mess up, and — boom! — I’m being helicoptered to the hospital…You step out there knowing the dangers. And it’s intimidating, but that’s what it’s all about: overcoming those fears and those odds.

White was able to overcome the crash, and recover in time to qualify for the Olympics. It’s not the first time White has battled injuries or health conditions. According to USA Today, White was diagnosed with the heart condition Tetralogy of Fallot (TOF) as a baby. According to Heart.org, it is a heart defect with four major issues.

According to the Huffington Post, White has undergone three surgeries since being diagnosed, but has still managed to become one of the most successful athletes in the world. White spoke with Jimmy Kimmel, whose son was diagnosed with the same condition.

“Similar situation, I was just slowly turning blue and my parents knew something was up,” White told Kimmel (via Huff Post). “The doctors came in and found out that was the scenario, the heart condition.”

While much less serious, White also suffered a wrist injury during the 2014 Olympics, and eventually decided to withdraw from the initial running of the slopestyle event in light of poor track conditions. White is looking for redemption this year, as he looks to win his third Olympic gold medal.

White admitted that his success caused his motivation to be challenged in past years, but this year comes in with a different mindset because of the recent adversity. He spoke with the Los Angeles Times about maintaining his love for snowboarding.

“It’s like if you’ve ever been in a relationship and someone loves you and you’re like, I wish I could flip a switch and love you back,” White told the Los Angeles Times. “You know what I’m saying?”

Here’s a look at White discussing his heart condition on The Jimmy Kimmel Show.
Shaun White on Having Same Heart Condition as Jimmy Kimmel's BabyShaun talks about being born with the same exact heart condition as Jimmy's newborn baby boy Billy, and he explains how he ended up becoming an Olympian in spite of it. Pedestrian Question – Are You High Right Now? youtu.be/cPm0ySQvSbU SUBSCRIBE to get the latest #KIMMEL: bit.ly/JKLSubscribe Watch the latest Halloween Candy Prank: bit.ly/KimmelHalloweenCandy Watch…2017-05-02T07:30:00.000Z 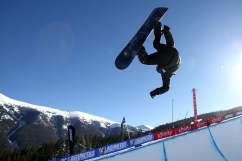 Read More
Shaun White, Snowboarding, Winter Olympics 2018
How did Shaun White get injured during his practice run in New Zealand? Find out the latest on White's injury, and his battle with a lifelong heart condition.