Vanessa Bryant was married to NBA legend Kobe Bryant. Kobe Bryant was killed in a helicopter crash on the morning of Sunday, January 26, 2020 at around 10 a.m. PT. Bryant was traveling in the helicopter with four other people including his 13-year-old daughter, Gianna.

Vanessa Bryant, born Vanessa Cornejo Ubrieta, grew up in California. She was born on May 5, 1982 in Huntington Beach, California; however, she took stepfather Stephen Laine’s last name after her mother married him in 1990. Vanessa has one older sister, Sophie, who is ten years older than she is.

Vanessa was a model by the time she was 17 years old. When she met her late husband, she was working as a background dancer for the video for “G’d Up” by Snoop Dogg’s rap group The Eastsidaz. Kobe was in the same building working on an album that was never released.

Here’s what you need to know about Vanessa Bryant:

1. Vanessa and Kobe Bryant Were Married Since 2001

Though the couple went through a rough patch in 2011, when Vanessa filed for divorce, they have been married since April 2001. Vanessa was only 18 at the time of their wedding, having met the NBA star when she was 17.

Vanessa was performing as a background dancer in a music video when she met the then-22-year-old Kobe. Kobe had already been in the NBA for three seasons at that point. According to Vanessa’s friends, Kobe began sending roses to her at her high school and picking her up at the end of the day.

There was so much publicity around their relationship that Vanessa, who was attending Marine High School at the time, had to finish out her high school senior year being homeschooled to avoid photographers. They announced their engagement at her 18th birthday party. 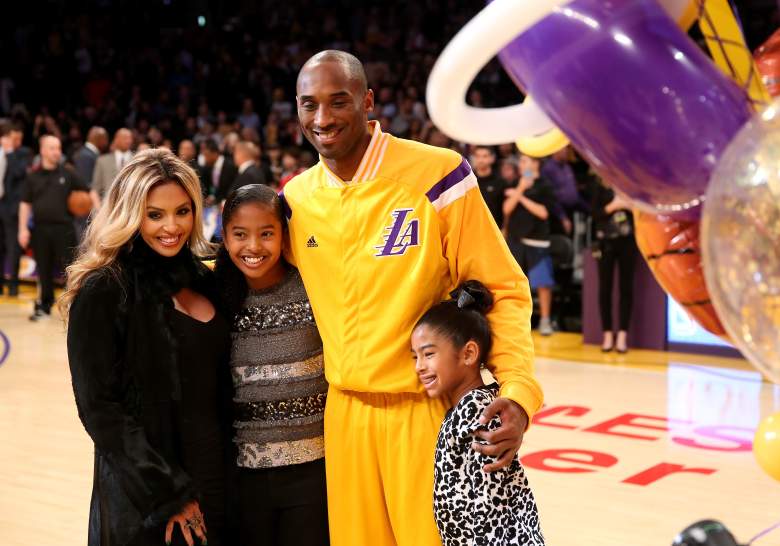 Kobe’s parents did not attend the couple’s April 2001 wedding. His parents thought that Vanessa was too young to be married to Kobe. They were also concerned because of the lack of the prenuptial agreement since Kobe had already won a championship and was well-off financially.

After the wedding, the Bryants moved from their home in Pacific Palisades to the Newport Coast to be closer to Vanessa’s family. This put further strain on the relationship the NBA Star had with his parents at the time.

According to an interview with The Los Angeles Times, his parents also had a hard time with the fact Kobe was marrying a Latina woman instead of an African American woman.

In a 2016 piece by ESPN, it was reported that Kobe hadn’t spoken to his parents in nearly three years. His parents allegedly attempted to “auction off his high school memorabilia without his consent.” His parents did not attend the ceremony when the Los Angeles Lakers retired Kobe’s jerseys, numbers 8 and 24, in December 2017.

3. The Couple Had Four Children

Happy Birthday my baby. I love you beyond measure. You will always be my little Principessa #17

Vanessa Bryant has four daughters with Kobe Bryant. Her oldest child, Natalia, turned 17 just a week before her father’s death. Their youngest child, Capri, was born in 2019 and is not yet a year old.

Natalia Bryant was born in 2003. In early 2005, Vanessa suffered a miscarriage due to an ectopic pregnancy, the perilous condition that happens when the egg is fertilized outside the uterus.

Ten years later, Bryant opened up about the tragic loss, taking the blame for his wife’s miscarriage.

“[It’s] something I gotta carry forever. The reality is it happened because of me. That’s something I have to deal with,” he told the New York Daily News.

In the Showtime documentary “Kobe Bryant’s Muse,” the former Lakers player also spoke about losing the baby and how he felt as though it was his fault.

“The reality is it happened because of me. That’s something I have to deal with. We were expecting…and um…expecting our second child during that time…and there was just so much stress, she actually, she actually miscarried,” he said.

Getty Gianna Bryant, daughter of Kobe Bryant #24 of the Los Angeles Lakers and the Western Conference, handles the ball during warm ups before the NBA All-Star Game 2016 at the Air Canada Centre on February 14, 2016 in Toronto, Ontario.

Vanessa gave birth to the couple’s second daughter, Gianna in 2006. According to TMZ Sports, 13-year-old Gianna was among those killed in the crash. Sources told TMZ that the travelers were on their way to the Mamba Academy for a basketball practice when the crash occurred.

Ten years later, in 2016, Bryant and Vanessa welcomed their third daughter, Bianka, three years after calling off their divorce in 2013. Kobe Bryant had been seen attending basketball games with his daughters, who are fans of the sport and players themselves.

4. Vanessa Stood by Kobe When he Was Accused of Rape

Vanessa stood by Kobe when he was accused of raping a 19-year-old hotel employee in Eagle, Colorado, in the summer of 2003.

Vanessa released a statement at the time, saying that her husband was not a criminal.

“I know that my husband has made a mistake – the mistake of adultery. He and I will have to deal with that within our marriage, and we will do so. He is not a criminal…” the statement reads. “Because I know him to be innocent, I will stand by him and we will face this together. I will give him all the strength and support he needs to face these false accusations.”

The case was dropped the following year after the accuser refused to testify, but Kobe appeared at an infamous press conference with his wife by his side to talk publicly about the scandal.

He allegedly bought her an “apology” diamond ring to help win her forgiveness. The 8-carat purple diamond ring cost over $4 million. People reported at the time that the basketball star had actually commissioned the ring weeks before the charges were announced, however.

Vanessa Bryant filed for divorce from Kobe in 2011 after the couple hit a rough patch. According to TMZ, Vanessa caught her husband with another woman. It was reportedly the latest in a long line of alleged infidelities.

“Vanessa Bryant filed for divorce Friday in the Orange County Superior Court, citing irreconcilable differences, and will get the sprawling Newport Coast estate as part of the divorce settlement already struck by the couple. Her estranged husband bought the home in 2001, the year the couple married. His current living arrangements are unknown. Vanessa Bryant signed the papers on Dec. 1. Kobe Bryant signed his response on Dec. 7 and it was filed Friday, according to the documents,” Fox Sports reported at the time.

A year after announcing their intent to get divorced, rumors began to spread that the couple was attempting a reconciliation. They made an appearance together in 2012 at the Staples Center, and in January 2013, Vanessa announced that the divorce had been called off.

READ NEXT: Kobe Bryant’s Kids: He Had Four Children With Wife Vanessa Bryant