It is the time of the year where predictions are made for each team in the NFL. Training camp is a few days away, and many are beginning to speculate on who will make the playoffs and win the Super Bowl. USA Today’s Nate Davis puts out annual projections of every team in the league before they report to training camp. In his most recent projections, he has the Kansas City Chiefs as a wild card team.

This would mark the first time since 2015 that the Chiefs did not win the AFC West. If Kansas City is not on top of the division, there is only one other option. Davis predicts the Los Angeles Chargers to win the division at 12-4, and ride their momentum all the way to a Super Bowl title. The Chiefs were projected to finish just one game behind Los Angeles at 11-5.

Davis has the Chiefs as the No. 5 seed in the AFC. In the first round of the playoffs, Davis says the Chiefs will lose to the Indianapolis Colts, ending their journey very short of their goal. For Kansas City, this would be a huge step back. They finished 12-4 just a season ago, and came one game short of the Super Bowl. During their run, they dominated the Colts 31-13. This is a Super Bowl or bust season for the Chiefs.

It's about that time … my annual NFL record projections for all 32 teams: https://t.co/kSsiMbTMCH pic.twitter.com/y6hyWWyxc5 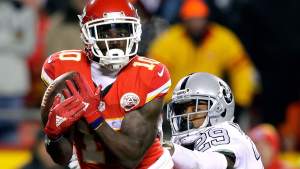 Davis pointed out concerns in his section on the Chiefs. First, how will Kansas City’s new look defense work together. The Chiefs added Tyrann Mathieu to bolster their secondary. Chris Jones is still without a contract, and his future is unknown. Kansas City will be sporting a new defensive scheme with Steve Spagnuolo now running the defense. In 2018, the Chiefs had one of the worst defensive units in the league. Changes had to be made, but they must show that they can play together.

Another question mark is the play of Patrick Mahomes. It is almost impossible to duplicate a 5,000 yard, 50 touchdown season that ended with an MVP award. At just 23 years old, Mahomes is already one of the best quarterbacks in the league. While his numbers may not be as eye opening, he will continue to produce at a high level.

Mahomes will have his No. 1 receiver for the entire season. The NFL decided not to suspend Tyreek Hill which means he can report to camp immediately. His teammates were supportive of Hill throughout the entire process, and having him back is a huge boost to the offense.

The Chiefs open their season with three of their first four games on the road. Following their early stretch of road games, they return home for two tough opponents at home. While going on the road is always a challenge, the Chiefs first three games away from home are against poor teams. They open up their season against the Jacksonville Jaguars and Oakland Raiders. After their home opener in week three, the Chiefs travel to take on the Detroit Lions. This is an important stretch for Kansas City to open their season.

It is surprising to see the Chiefs as a wild card team, but the fact remains that they play in a division with another top-tier team. The Chargers expectations heading into 2019 are just as high as the Chiefs. This will be one of the most watched match ups throughout the NFL season as both teams will battle it out for the division title.

Read More
Kansas City Chiefs, NFL
It is the time of the year where predictions are made for each team in the NFL. Training camp is a few days away, and many are beginning to speculate on who will make the playoffs and win the Super Bowl.