Getty Russell Wilson and wife Ciara are part-owners of the Seattle Sounders and celebrated their MLS Cup win during the championship parade.

Russell Wilson had a birthday during Thanksgiving week and his wife Ciara took to Instagram to praise the Seahawks quarterback. Ciara noted that she was “proud of the Man you are continually becoming” in her lengthy social media message.

“MY LOVE!! @DangeRussWilson, I am incredibly grateful for you, and proud of the Man you are continually becoming!” Ciara noted on Instagram. “Every year literally gets better and better! I admire you in so many ways…The God In You, The Leader in you, The Husband In you, The Best Friend In You, The Father In You.. I literally have it all in you, and it’s the best feeling in the world! May today and this year be the best one yet for you! I can’t wait to see what more God has in store for you! I know it’s going to be amazing!! I love you to the Moon and Back! #HappyBirthday My Sweet Honey! ❤️?”

Ciara later made a second post featuring a picture of Wilson in his Seahawks uniform noting she was “crushing” on her husband.

“Crushing on my Birthday Boy ? aka Zaddy. #HappyBirthday Honey! #MCE,” Ciara said of Wilson on Instagram.

It has been a busy Fall for Wilson and Ciara as both have been thriving in their respective careers. Wilson is in contention for the NFL MVP as the Seahawks are one of the best teams in the NFC. Ciara recently hosted the American Music Awards, and the honor came just after she celebrated the 15th anniversary of her first album “Goodies.”

“It’s special. It’s kind of surreal — it’s like pinching myself, and going, ‘This is literally 15 years ago,'” Ciara told Entertainment Tonight. “Like, 15 years ago sounds so far away. To see this generation dancing to that song like it’s a new song, and it’s falling right into the pocket of what’s happening now, it’s kind of crazy. It also shows you the cycle of music and how different times repeat themselves all over again.”

Wilson gave his wife a shoutout ahead of the awards show just after another Seahawks win.

“Wilson’s got 1 win today… now time for another tonight with @Ciara on the @AMAs Hosting & Performing My #Melanin Queen,” Wilson noted on Instagram.

Wilson has a tradition of visiting the Seattle Children’s Hospital every Tuesday and is often joined by Ciara. Wilson makes social media posts with the children he visits and explained why he is passionate about making those visits.

“There’s no better feeling than to see a child who goes in with cancer then going out with no more cancer…It’s a tough thing that we all experience,” Wilson noted, per the Try-City Herald. “We all may know somebody [impacted by cancer] or whatever it may be.”

The couple is proud parents themselves. Wilson and Ciara have one daughter, Sienna, together and the singer also has a son, Future, from a previous relationship. 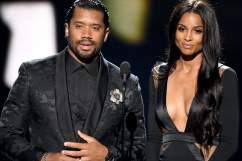