LeBron James’ son Bronny James is just 15 years old, but the young player is already being recruited by top college basketball programs. Bronny is a high school freshman at Sierra Canyon who is part of the 2023 class. He is already listed at 6’2″ and 165 pounds, per 247 Sports.

Kentucky head coach John Calipari admitted in a 2016 ESPN interview with Stephen A. Smith that he sent LeBron a scholarship offer for Bronny when he was about two years old. Calipari noted was is more of a gesture he does to people he is close with rather than a full-on recruitment of his son.

“I offered Bronny probably when he was two years old,” Calipari explained to ESPN. “…[I do it] because they’re friends. They’re family. I mean, I think I offered Rip Hamilton’s son. Kerry Kittles is sending me his son’s picture of crossing over. Most of those kids, I’m not coaching by that time, and if I am they better be one-and-done because it will be like year-to-year.”

Smith pressed Calipari on why he is offering kids like Bronny scholarships at such a young age.

“I’m not recruiting Bronny, he’s got a scholarship offer,” Calipari clarified. “…What happens [is] when my friends have sons and they’re born, I sign a scholarship paper and I send it to him. ‘This is for your son.’ And they get that. And the second thing is, if Bronny asks his dad about me, I hope he would say, ‘He’s family.'”

ESPN’s Brian Windhorst and Dave McMenamin reported in 2016 that Bronny has offers from Kentucky and Duke. The Wildcats are currently the only team listed with an offer to Bronny on his 247 Sports’ recruiting profile. LeBron has a close relationship with Duke head coach Mike Krzyzewski from their time together as part of Team USA. North Carolina, Kansas and UCLA are among the additional teams already interested in Bronny, per 247 Sports.

Bronny is now sharing the spotlight with his dad as LeBron’s Lakers play on ESPN while Sierra Canyon plays on ESPN2 on Friday, January 3. Bronny and Sierra Canyon recently took on his alma mater St. Vincent-St. Mary.

LeBron is shutting down the recruiting talk as he wants his son to enjoy his time as a high schooler.

LeBron does have his sights set on potentially sharing an NBA court with Bronny. LeBron discussed the idea in a 2017 interview with GQ.

LeBron and his wife, Savannah James, are also the proud parents of another son Bryce and daughter Zhuri. We will see in just a few years if LeBron gets his wish of playing against son. 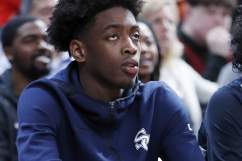