Let the healing begin. Chicago Bears starting quarterback Mitchell Trubisky just had offseason surgery on his left shoulder to repair the partially torn labrum he sustained Week 4 against the Minnesota Vikings. His recovery time should be a few months, according to Jeff Dickerson of ESPN, who broke the news of Trubisky’s recent surgery.

Bears QB Mitchell Trubisky underwent surgery to repair the partially torn labrum in his left, non-throwing shoulder shortly after the conclusion of the regular season. The typical recovery time for a minor procedure such as this is a couple of months.

Trubisky missed the Bears’ Week 5 game against the Raiders in London, and the team had a bye Week 6, but Trubisky returned to action Week 7 and started every game for the Bears the rest of the season. He played through the injury, and his performance on the season was subpar when compared to his 2018 season. Whether or to what degree the left shoulder injury affected his performance can’t be measured, but the injury likely played a role in Trubisky’s drop in scrambling yards and attempts.

In 2018, the Bears quarterback ran the ball 68 times and gained 421 yards. This season he ran the ball 48 times for 193 yards. His 4.0 average per carry this season was the lowest of his career (he had averaged 6.1 yards a carry his first two seasons. 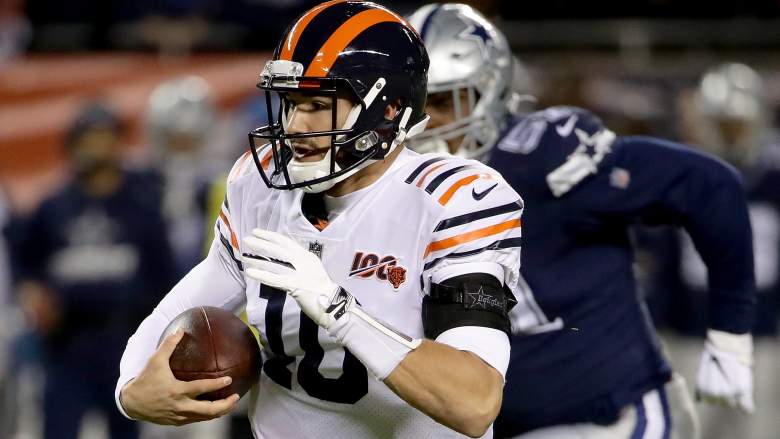 GettyQuarterback Mitchell Trubisky #10 of the Chicago Bears played the majority of the season with a torn labrum in his left shoulder. (Photo by Jonathan Daniel/Getty Images).

Surgery was expected, but Trubisky won’t be able to use this offseason to train at full strength, it seems.

Will Trubisky missing out on offseason workouts and preparations hurt him in 2020 — a year he’ll either be on thin ice or replaced all-together if he doesn’t perform well? As Windy City Gridiron’s Jacob Infante noted, Trubisky won’t be able to go full strength this offseason, and considering the regression he and the entire offense not named Allen Robinson experienced in 2019, that’s not ideal going into 2020.

Trubisky has had a season filled with ups and downs, and his regression at the quarterback position in 2019 has been well documented. While Bears general manager Ryan Pace has said multiple times that Trubisky would be the team’s starting quarterback in 2020, he was also non-committal in regard to Trubisky’s fifth-year option.

When asked if he would be picking up the fifth-year option in Trubisky’s contract, Pace remained non-committal. “We’re not at that point right now,” he said. “When we are, we’ll let you know.”